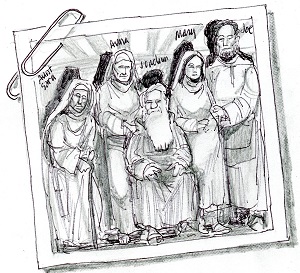 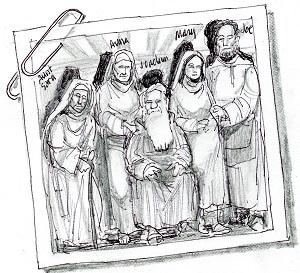 Memorial of Saints Joachim and Anne, Parents of the Blessed Virgin Mary

Today’s commemoration is no doubt a popular devotion resting on the historical fact that Jesus did have an extended family, including grandparents. His Incarnation was not just a personal immersion in the human condition but also an intimate link to family life. We can imagine him as a baby being passed among relatives, a small child playing on the floor, a self-conscious pre-teen observing adults, a young man longing for independence and meaning. His humanity was like our own, and we draw closer to him for this common experience.

Today’s readings pair Jeremiah 14, the lament over the destruction of Jerusalem, with Jesus’ explanation of the parable of the wheat and weeds to his inner circle of followers in Matthew 13. In both instances, the word of God is proclaimed by the prophet, and the response determines the fate of those who receive or reject it.

Jeremiah, the reluctant 6th century prophet who was dubbed “a man of constant sorrow” is given the difficult charge of warning Jerusalem of the coming destruction of the holy city by the Babylonians in 587 BCE and the long exile that followed. The land itself is wracked by drought, and under siege the city will experience the horrors of a war in which starvation will claim as many lives as the sword.

In Jesus’ own weeping over the city and warnings of coming disaster, the evangelists will turn to Jeremiah’s imagery to describe the destruction of Jerusalem again in the year 70 CE during the Jewish-Roman wars, when over a million victims died and the survivors fled the region in the great diaspora.

Preachers and prophets need not always be doomsayers, but their role in and out of season is to call believers to live according to the covenant God has revealed. Matthew summarizes the purpose of all of Jesus’ parables by beginning with the parable of the sower.

Jesus tells stories the way a sower sows seeds, each one a compact invitation to open our hearts to God’s good news of mercy and justice. If we are good soil, receptive and nurturing of the gift, conversion will bring abundant life. If we ignore or reject the gift or allow other seeds of deception to take root in us, our lives will shrivel or be choked off and devoured by distractions and misdirection.

Those who have ears, let them hear, then respond. Each parable contains the same message: Choose and embrace life. Immerse yourself in human relationships and experience. Live fully each stage of your life, open to God’s voice within your heart, your physical needs and questioning mind. Self-discovering will uncover the Christ within you, for Jesus made this same journey.