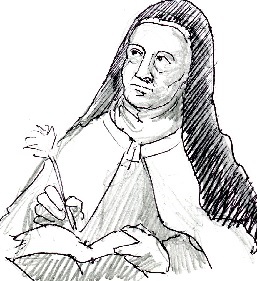 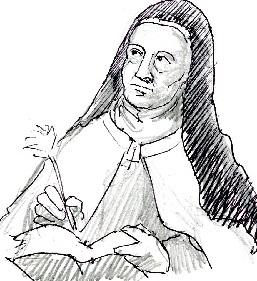 Today the liturgy commemorates the life of St. Teresa of Avila, a sixteenth century Spanish mystic who sought to restore rigor and asceticism to her order of contemplative nuns during the time of the Catholic Reformation.  She is celebrated for her passionate spirit, so sensually captured in Bernini’s marble master work, “The Ecstasy of Saint Teresa.”   Paradoxically, her epic life inspired British author George Eliot to celebrate the idealism of so many other women who remain anonymous, like Dorothea Brooke, the heroine of her novel Middlemarch. She writes in the prelude:

Here and there is born a Saint Teresa, foundress of nothing, whose loving heartbeats and sobs after an unattained goodness tremble off and are dispersed among hindrances,  instead of centering in some long-recognizable deed.

Today’s readings might be said to guide all anonymous souls to some assurance that God has not forgotten them. St. Paul argues in Romans that even Abraham, the great founding patriarch of both Judaism and Islam, can claim no merit except that he trusted God to work through him to change history. Only his faith, not his works, lifted him from obscurity to be remembered.

In today’s Gospel, Jesus tells his disciples not to be afraid of anyone except those who can seduce and corrupt us with lies, for God promises to protect the innocent who trust him. The last petitions of the Our Father are meant to guard us: “Lead us not into temptation and deliver us from evil.”  Jesus compares us to sparrows that live and die in God’s constant care, going about their simple lives, but full of grace and purpose.  If this is so for them, how much more does God love each one of us.

How many good people live within their limited circumstances, doing the best they can, dogged by necessity but remaining faithful to their best instincts without fanfare or recognition.  For every canonized saint there are countless others who hold the world together in ordinary ways. God loves these “sparrows” among the eagles who soar to spiritual heights enabled by God to model courage on larger stages that inspire the world.

In the closing lines of her novel, a celebration of real life and unfinished prayers, Eliot praises the full range of human accomplishment and futility, giving due to the hidden heroes who, like Dorothea, do the best they can, as things arise:

Her finely touched spirit had still its fine issues, though they were not widely visible. Her full nature, like that river of which Alexander broke the strength, spent itself in channels which had no great name on the earth. But the effect of her being on those around her was incalculably diffusive: for the growing good of the world is partly dependent on unhistoric acts; and that things are not so ill with you and me as they might have been, is half owing to the number who lived faithfully a hidden life, and rest in unvisited tombs.

Not one of them has escaped the notice of God.