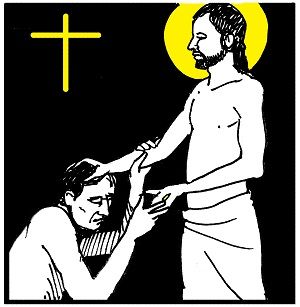 If scholars are correct that the fourth Gospel was composed toward the end of the first century, then its audience was perhaps two generations after the fact and not eyewitnesses to the Easter Event. So, it is not hard to imagine that today’s Gospel story of “Doubting Thomas” was directed to believers who wished they had been eyewitnesses to the crucifixion and resurrection of Jesus. If only they had been there to see him in the Upper Room, hear his voice and examine his wounds, then their faith, and ours, would be so much easier and stronger.

There is no question that the original companions of Jesus were privileged to witness his earthly life, the trauma of his death and the thrill of his resurrection. The question is, how did they experience all this and what of the essence of their experience is just as accessible to us as it was to them?

The fourth Gospel builds on the earlier tradition of the Easter accounts, preserving the mysterious nature of the first reports of the empty tomb, the witness of the women, the skepticism of the Apostles, and then some strange appearance stories in which Jesus is not immediately recognized. In today's passage, Jesus suddenly enters the locked upper room where the Apostles are huddled in fear. He shows them his wounds, he eats with them, he commissions them to go forth and preach repentance and the forgiveness of sins.

With deliberate ambiguity and explicit detail, the tradition suggests that there is more to the story than simple physical encounter and measurable proof. Believers undergo a radical and reality-bending process to grasp both the fact and the meaning of the living presence of the crucified and risen Jesus before them. It is an experience both in time and out of time, a revelation that breaks in upon history and transcends it.

Thomas insists on touching the wounds of the crucified Jesus, and instead he is confronted by the glorified Christ, his Lord and God. He wants tangible evidence and instead receives a heart-stopping theophany as the veil is lifted between time and eternity.

The difference between physical sight and faith runs throughout the fourth Gospel from the call of the first disciples in John 1 to the Easter story in John 20-21. Knowing who Jesus really is depends on the gift of faith. Many see Jesus but do not believe in him. The Apostles are prepared during their time with Jesus in ministry to recognize what the Resurrection will finally reveal. He is the Christ of God, the Beloved Son of the Father, the Eternal Word, and the Savior of the World.

Grasping this is only possible with the grace of Easter faith, which Thomas receives in full in the upper room. The gift is ours for the asking, but we must be prepared to let it change us profoundly and irreversibly.  Thomas prayed to touch Jesus because he loved him, and his prayer was answered because Jesus also loved Thomas. If we want this same intimacy, we are ready for Easter faith.

The Nativity of the Lord