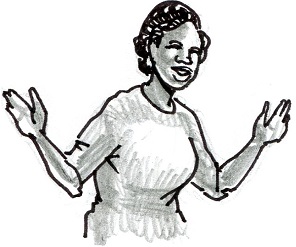 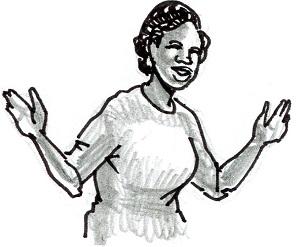 Today’s pairing of canticles shows us the probable source and influence on Luke’s canticle for Mary, the Magnificat.  Hannah, though barren, also conceived a child. She returns with the boy, Samuel, to entrust him to Eli, the high priest, to serve the Lord. Her song is found in today’s responsorial psalm.  It has many of the elements we see in Mary’s song, including her joy that God has heard the cry of the poor, especially the women who have always borne the brunt of poverty and oppression caused by the rich, powerful and arrogant.

Both songs rejoice at the promised reversal of fortune that will lift up the lowly and bring down the mighty. Both praise God for feeding the hungry while sending the well fed away from the table.  But Hannah goes further, revealing the raw force of a whole tradition of victory chants like those shouted by the women for David after a battle, when the “bows of the mighty have been broken” and the women rushed forward onto the battlefield to claim the spoils of war. Hannah does not resist singing for all the women like herself who have suffered rejection for being unable to bear children. Now they bear seven sons while the fertile wives who mocked them languish with none.

While Mary’s Canticle is more restrained and prayerful, it has the same edge Hannah exults with, that God will make the first last and last first, a theme found often in Jesus’ preaching to warn those who sit on thrones and dine sumptuously that the day is coming when God will set the world aright.

It is perhaps not surprising that the Lectionary has rarely assigned the Magnificat to Sunday Masses during the liturgical year because of the almost revolutionary tone that characterizes the entire story of Mary’s visit to Elizabeth. They perceive their pregnancies as the beginning of a long-awaited shift in the balance of power between the rulers of history and the victims of history.  The story and the song pose the powerful thought of just what our world might look like if women ran the economy, if mothers decided whether to go to war, and if the feminine genius were recognized in every election that decides who will set the agenda and wield the gavel.

What did Mary and Elizabeth talk about during the three months they spent together until Elizabeth gave birth and Mary, now visibly pregnant, prepared to return home to Nazareth to deal with Joseph?  Were they like the women in “The Cotton Patch Gospel,” sitting on the porch snapping beans while they plotted the overthrow of the world order so the poor could inherit the earth?  (Another idea Jesus got from his mother?)

What sort of Christmas can we imagine if the Magnificat were the Charter and “fight song” of the church, recited, taught, sung so often everyone knew it by heart and took it to the streets to bend history and culture toward truth and justice?  Would we not welcome God into our world as Mary and Elizabeth did with such joy and expectation?  What has happened to the Christmas meant to change the world? Do the women know, and if they do, are we listening?