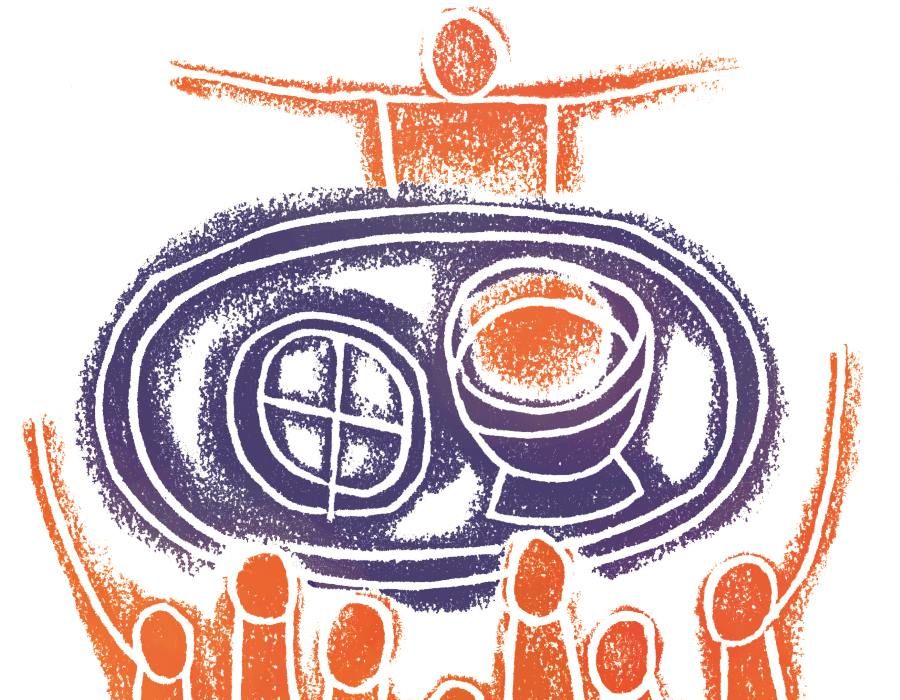 Have you ever been part of a theater production? The sets have to be painted. Costumes have to be designed. Music rehearsed, lines learned. There's a sense of solidarity as you all band together, working, practicing, laboring to build a living story. On opening night you hope it all comes together and weaves a spell so that the audience, for two or three hours, will enter into the reality you create before them.

I used to run with a theater crowd in high school. (I was usually on the tech crew, painting backdrops, while most of my friends were actors.) These days, I'm a passionate opera fan. To me, there's nothing like sitting in the dark theater, listening to the orchestra perform the overture; then hearing a drama come to life through the music and the human voice. A well-done opera can make me cry for days — no kidding. (Lots of them are tragedies, after all.)

The same thing often happens to me in church: I get so overwhelmed by the scripture, or the preaching, or the music, that I am awash with tears. I recognize the truth, the reality of something: God's compassion, the triumph of light over darkness, my own sin — and it breaks my heart.

It takes a lot of practice by many people to make this happen.

Søren Kierkegaard once wrote, "Only in subjectivity is there decision" (Concluding Unscientific Postscript to Philosophical Fragments, 1846). I think what he meant by this is that we do not really believe until we feel something. You can give all the rational arguments for something that you want, but no one will really decide, no one will really be convinced, if it all remains within your head.

I remember going to see a performance of "Lucia de Lammermoor," Donizetti’s 1835 opera of thwarted love on the 18th-century Scottish moors, whose heroine goes insane with grief (the famous "mad scene"). Instead of following the story, I spent most of the opera thinking how horribly ugly the costume design was. Why did they choose those awful tartans? It kept me in my head — critical — instead of feeling the performance, in my heart.

There have been times like that during liturgy, too: The homily is badly prepared. The cantor’s voice is so low that no one can follow along. The choir doesn’t practice the hymns. I once went to an Easter Vigil where they accompanied the first reading from Genesis with a sort of projection on the wall of a lava floe, with this churning sound that was supposed to be — Creation, I guess? Instead of marveling at what God had done, I just kept thinking, "This is weird."

Liturgy and performance (i.e. opera) have a lot in common. There’s music, singing, environment to design, gestures to memorize. There is no greater drama than the Triduum, with its processions and venerations and prostrations; the fire, the light low, the Exsultet, the story of salvation, and then the light rising upon lilies as "Alleluias" burst forth after a long Lent of fasting from this acclamation.

But despite the similarities, liturgy and performance are not the same thing. In liturgy, we are not just putting on a good show. We aren’t just sitting there watching performers act out a made-up tale. No, in liturgy, we are not trying to create a new reality from scratch. We are giving expression to a reality that already exists. We’re living it, not just acting it out. And when we do this, everyone plays a part.

Even if we are not lectors, or cantors, or preachers or musicians or being baptized this Easter, we all have a part to play. Lent is like our practice to enter the story fully. Let’s use the rest of Lent to prepare to be the people who make the liturgy come alive and tap into the mystery it is trying to portray.

At the Vigil, traditionally, there are six readings from the Hebrew Scriptures, one from Paul, and the Gospel. There are psalm responses to five of the readings (with options for the fifth response); and after the sixth, we sing "Alleluia," and then hear Paul's proclamation of the Resurrection. Many congregations do not read the full gamut of Vigil selections — the rubrics allow them to be shortened, particularly when there are going to be baptisms. But whichever responses we sing, let us sing them with our whole heart:

Lord, send out your Spirit, and renew the face of the earth.

You are my inheritance, O Lord.

Let us sing to the Lord; he has covered himself in glory.

I will praise you, Lord, for you have rescued me.

You will draw water joyfully from the springs of salvation.

Like a deer that longs for running streams, my soul longs for you, my God.

Editor's note: This reflection was originally published in the March 2016 issue of Celebration. Sign up to receive daily Lenten reflections.

Remembering why I became a priest

Alleluia is our song