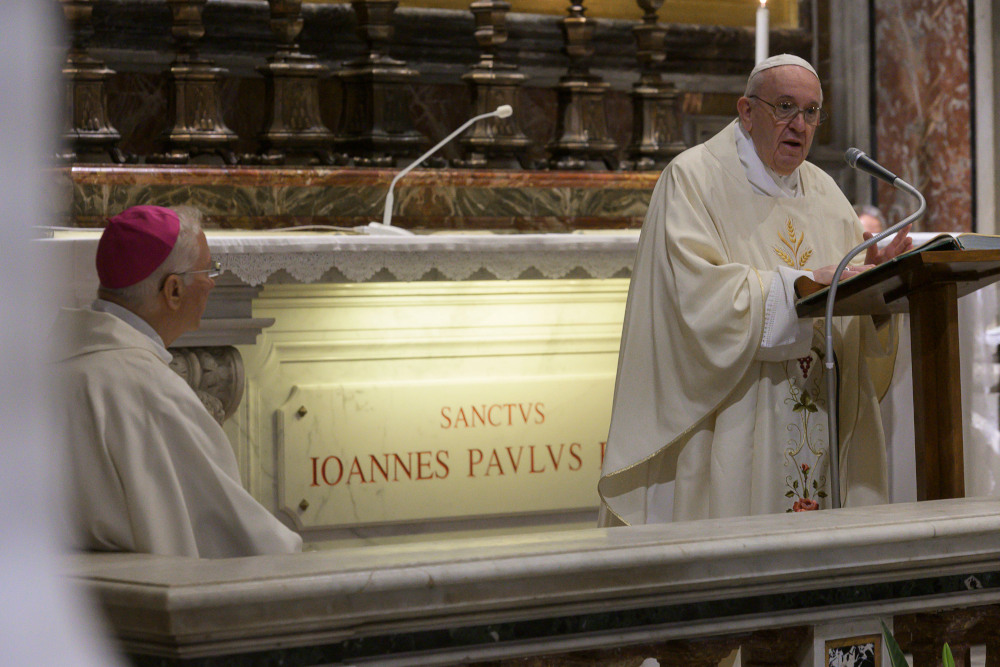 Pope Francis celebrates a Mass for the 100th anniversary of the birth of Pope John Paul II, in St. Peter's Basilica, at the Vatican Monday, May 18, 2020. The Pope held the morning mass in the chapel where is located the grave of John Paul II. (AP/Vatican Media)

St. John Paul II was honored on the centennial of his birth May 18 with special Masses at the Vatican and in his native Poland, an anniversary that comes as the Polish church finds itself confronted by new allegations of clerical sex abuse.

From the small town of Wadowice, Poland, where Karol Wojtyla was born on May 18, 1920, to Warsaw and the Vatican, Catholic faithful gave prayers of thanks for the man who was pope from 1978 until his death in 2005.

To Poles, John Paul is best remembered for using the papacy to shake the foundations of an oppressive communist system that was toppled across Eastern Europe 11 years into his papacy.

"Karol Wojtyla was one of the most important figures of the 20th century," Polish President Andrzej Duda said in a letter to worshippers at Poland's holiest site, the Jasna Gora Monastery in Czestochowa. "His teaching and testimony still touch the hearts and minds of millions of people."

Poland's Jewish community also remembered John Paul's efforts to seek reconciliation between Catholics and Jews, an effort that included apologizing for the centuries of Christian persecution of Jews and historic first visits by a pope to synagogues and Auschwitz.

"No other Pope has done more to heal the painful wounds and he did more than anyone else in history to effectively erase the scourge of anti-Semitism," Poland's chief rabbi, Michael Schudrich, said in a statement on May 17.

But John Paul's legacy has been stained by his failure to address sex abuse in the church, which was well known at the Vatican during his papacy. And that issue has also been on people's minds in recent days because of a new documentary exposing alleged sex abuse in Poland's church.

The film, "Playing Hide and Seek," by brothers Tomasz and Marek Sekielski, was released May 16 online and had been viewed over 4 million times by May 18 morning.

It tells the story of two brothers, now young adults, who decide to confront a priest who allegedly abused them in their childhood. In their pursuit of justice they discover other alleged victims of the priest, Arkadiusz Hajdasz, but face a lack of compassion and help from church officials.

The film follows a documentary expose on pedophilia in the powerful Polish Catholic church by the Sekielski brothers released last year. That film, "Tell No One," triggered soul searching in a country where there is no higher authority than the Catholic Church and its clergy. That film also elicited an apology from Archbishop Wojciech Polak, the Primate of Poland, and prompted at least one cleric to leave priestly life.

After this new film, Polak, Poland's top church official, again voiced his concern and said the matter would be taken to the Vatican for investigation.

"The film 'Playing Hide and Seek,' which I watched, shows that the standards of protection of children and youth in force in the Church have not been observed," Polak said.

Film director Tomasz Sekielski said he expected viewers to feel anger when seeing how victims of clerical abuse are "deprived of state and church support."

In Rome, to mark the centenary, Francis inaugurated a new culture institute dedicated to John Paul at one of the pontifical universities in Rome.

Significantly, the institute doesn't focus on the church's teachings on sexual morality, as other John Paul-named academic institutes do. In line with Francis' broader idea of the role social sciences should play in Catholic education, it focuses on "contemporary culture" and is inspired by John Paul's "open and contemplative spirit, his passion for God and man, for creation, history and art," Francis said in an inaugural letter.

The Vatican also announced that a new feast day would be marked each Oct. 5 dedicated to St. Faustina Kowalska, a 20th-century Polish mystic to whom John Paul was particularly devoted.

(Nicole Winfield in Rome contributed to this report.)