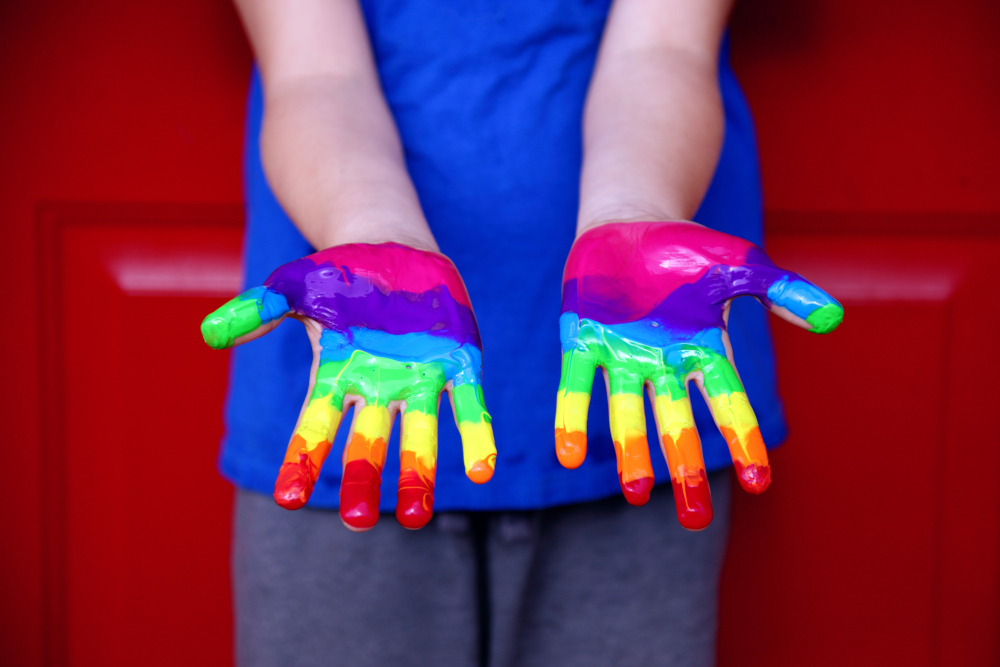 A new report from the Public Religion Research Institute finds that strong majorities within all religious groups, including white evangelicals and Jehovah’s Witnesses, show sustained support for LGBT nondiscrimination policies.

The newly released data from PRRI’s 2018 American Values Atlas, an annual survey of more than 40,000 Americans, showed that 69 percent of all Americans are in favor of enacting laws shielding LGBT people from discrimination in jobs, public accommodations and housing.

"Especially in these times and with this sort of politically charged issue, to see this level of agreement is actually pretty striking," said Maxine Najle, a research associate at PRRI. "We found broad support from pretty much every demographic, from every state and every major religious group – even among the groups who are generally more conservative on these LGBT issues."

While PRRI polling has found that religious resistance to same-sex marriage is declining, with more and more groups moving to a plurality of support, only about a third of white evangelical Protestants said they support same-sex marriage last year.

But on LGBT anti-discrimination policies, the support runs much deeper.

The highest agreement came among Americans who follow New Age faiths, at 86 percent. Jews, Hindus and Buddhists were all well above 70 percent, as were those who identified as religiously unaffiliated. Only slightly less in favor of LGBT protections, at about 70 percent, were Mormons, Catholics, white mainline Protestants and those who followed other religions PRRI does not track. Around 60 percent of nonwhite Protestants, Muslims and Orthodox Christians also said they favored such protections. 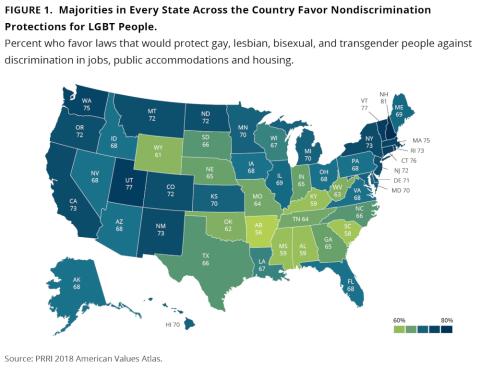 Majorities in Every State Across the Country Favor Nondiscrimination Protections for LGBT People. Graphic courtesy of PRRI

Majorities of Americans across the political spectrum, too, said they support LGBT nondiscrimination policies. About 79 percent of Democrats, 70 percent of independents and 56 percent of Republicans said they would support such laws – though Republican support has fallen from 61 percent in 2015.

In 2015, about 57 percent of white evangelicals said they supported nondiscrimination laws for LGBT people. The 3 percentage-point drop occurred before 2017 and is statistically insignificant, according to Najle.

On Wednesday (March 13), the Equality Act, which would codify anti-discrimination protections for LGBT people as part of federal law, is expected to head back to Congress. The bill would amend the Civil Rights Act of 1964 and the Fair Housing Act to ban anti-LGBT discrimination in employment, housing, credit, public accommodations, jury service, education and federal programs.

The bill has been introduced in various forms since 1974, including in 2015 and 2017, dying each time in committee, but has never been given a floor vote in Congress. Advocates are hopeful the bill can pass with Democrats now in control of the House and public polling such as PRRI’s showing broad support for LGBT protections.

PRRI’s findings on changing attitudes toward LGBT people confirm trends that researchers have seen among college students, noted Kevin Singer, a research associate with the Interfaith Diversity Experiences and Attitudes Longitudinal Survey. His team polled 7,200 students at 122 colleges and universities and found that 78 percent of incoming first-year students in 2015 found it "important" or "very important" that their campuses would be welcoming to people of diverse sexual orientations and gender identities.

"Instituting nondiscrimination protections could help to close the gap between perceptions of welcome, and how welcoming our campuses really are," Singer said.