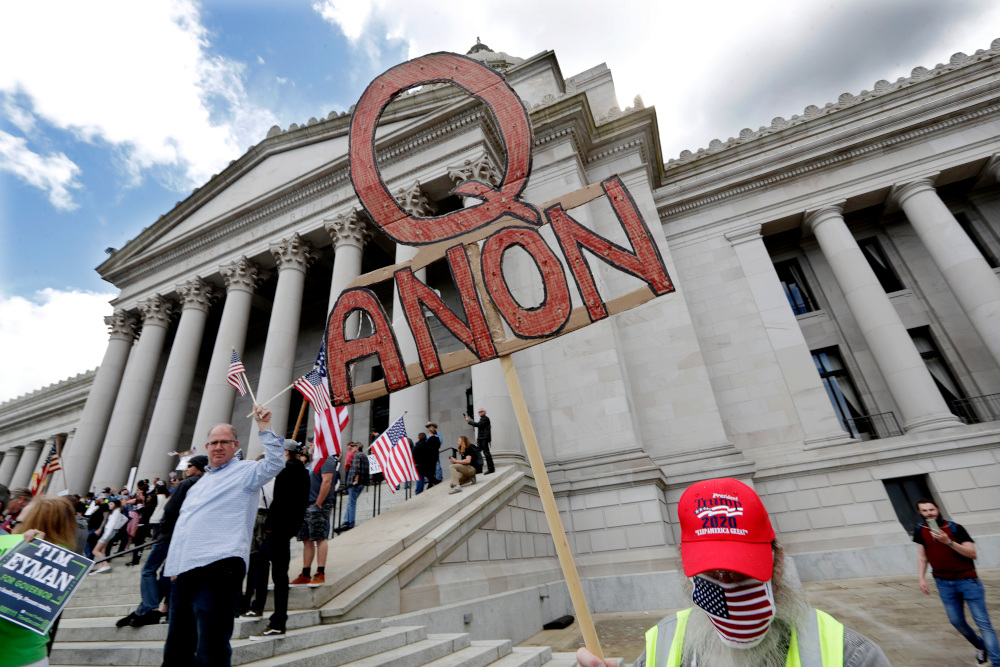 A demonstrator holds a "QAnon" sign as he walks at a protest opposing Washington state's stay-home order to slow the coronavirus outbreak Sunday, April 19, 2020, in Olympia, Wash. (AP/Elaine Thompson)

A new survey reports more than a quarter of white evangelical Protestants believe a QAnon conspiracy theory that purports former President Donald Trump is secretly battling a cabal of pedophile Democrats, and roughly half express support for the debunked claim that antifa was responsible for the recent insurrection at the U.S. Capitol.

The survey, which was conducted by the conservative American Enterprise Institute, reported 29% of Republicans and 27% of white evangelicals — the most of any religious group — believe the widely debunked QAnon conspiracy theory is completely or mostly accurate. QAnon has infiltrated other faiths as well, with 15% of white mainline Protestants, 18% of white Catholics, 12% of non-Christians, 11% of Hispanic Catholics and 7% of Black Protestants saying they believe it.

In addition, large subsets of each group — ranging from 37% of non-Christians to 50% of Hispanic Catholics — said they "weren't sure" whether the theory was true.

According to Daniel Cox, director of AEI's Survey Center on American Life, the report suggests conspiracy theories enjoy a surprising amount of support in general, but white evangelicals appear to be particularly primed to embrace them.

There was also significant support among white evangelicals for the claim that members of antifa, or anti-fascist activists, were "mostly responsible" for the attack on the U.S. Capitol — a discredited claim repeated by former Trump lawyer Rudy Giuliani and conservative religious leaders such as the Rev. Franklin Graham. FBI officials have said there is "no indication" antifa played a role in the insurrection.

Even so, the story has had staying power in the minds of many Americans, including 49% of white evangelical Protestants who said the antifa claim was completely or mostly true. So did 36% of white Catholics, 35% of Hispanic Catholics, 33% of white mainline Protestants, 25% of Black Protestants and 19% of non-Christians.

Among the religiously unaffiliated, 22% also expressed belief in the theory.

Asked to explain why white evangelicals appear disproportionately likely to embrace conspiracy theories, Cox noted that, as a group, they do not fit a stereotype of conspiracy theorists as people disconnected from social interaction. Instead, most retain strong connections to various social groups.

But white evangelicals stand out in a different way: The vast majority say some or a lot of their family members (81%) or friends (82%) voted for Trump in the 2020 election — more than any other religious group.

"People who do strongly believe in these things are not more disconnected — they are more politically segregated," Cox said.

"That kind of environment is really important when it comes to embracing this kind of thinking," he said. "You're seeing people embrace this sort of conspiratorial thinking, and everyone in their social circle is like, 'Yeah, that sounds right to me,' versus someone saying, 'You know, we should look at this credulously.'"

White evangelicals express robust support for other conspiracy theories as well. Close to two-thirds (62%) believe there was widespread voter fraud in the 2020 election — despite numerous experts and courts at all levels refuting such claims — and roughly the same percentage (63%) believe President Joe Biden's victory was "not legitimate." A majority (55%) also said they believed it was mostly or completely accurate to say "a group of unelected government officials in Washington, D.C., referred to as the 'Deep State' (has) been working to undermine the Trump administration."

White evangelicals also stood apart from other religious groups when asked about the potential for violent action: 41% completely or somewhat agreed with the statement "if elected leaders will not protect America, the people must do it themselves even if it requires taking violent actions."