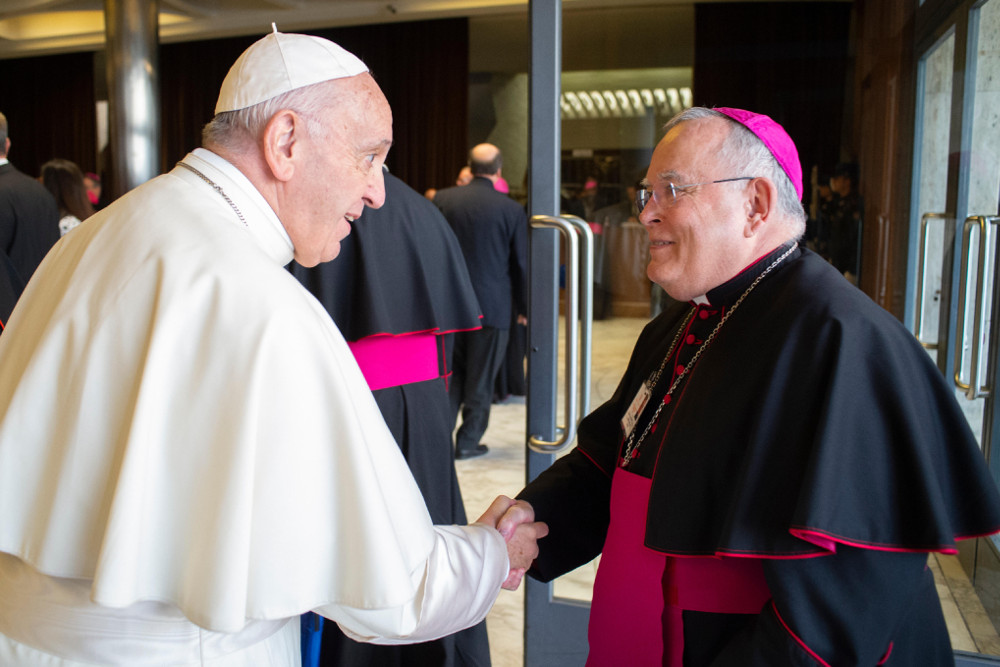 Pope Francis greets Archbishop Charles Chaput of Philadelphia before a session of the Synod of Bishops on young people, the faith and vocational discernment at the Vatican Oct. 16. (CNS/Vatican Media)

The more than 250 Catholic bishops from around the world meeting at the Vatican in October missed an opportunity to confront the global sex abuse crisis, said Archbishop Charles Chaput of Philadelphia.

"I wish that we had spent more time not only talking about (the crisis) but apologizing to people for it," said Chaput, one of the delegates elected by the U.S. bishops to participate in the Synod of Bishops on young people, the faith and vocational discernment.

The "resistance (of) some bishops" meant the abuse crisis was largely absent from the discussions, he told Catholic News Service Oct. 25. "Some say that (sex abuse) really is an issue of the Western world."

But "it seems to me that it's an issue of human nature, and it's very important for the church to talk about it," said the archbishop, who in August had written to Pope Francis asking him to postpone the synod in the wake of the scandal. Chaput was a member of the synod's ordinary council, which prepared the October assembly.

Judging from the discussion and the first draft of the meeting's final document — a draft he said could be amended significantly — Chaput said there also were other topics on which the synod could have been stronger.

"There was very little discussion of human sexuality at all. But anybody who sits in the confessional knows that that's an issue," he said, especially "for young people who are trying to learn how to be human and how to be Christian in a world that really promotes a wrong understanding of human sexuality."

"It's a natural desire for men and women to be married — it's not good for man to be alone, we have the Lord God's word on that — so that's a common issue for young adults everywhere," but the issue of marriage preparation got little attention at the synod, he said. "That probably should have been 98 percent of what we did because that's 98 percent of what the issues are for young people, but we didn't spend much time on it at all."

In his own address to the synod, Chaput asked that people not be identified by sexual orientation in the synod document, for instance by referring to "LGBTQ Catholics," because the church does not put people into categories like that.

The archbishop said it is a "sadness" for him when "people who have same-sex attraction talk about themselves" only or primarily by referring to their sexual orientation.

"I think that you're God's beloved more than you're that. So, I'm not going to call you that. I don't think that's what God called you," he said.

Chaput said he was struck by the number of synod participants sharing their personal experiences and the experiences of their people suffering in areas of Africa and the Middle East where war and poverty undermine the possibility of a future for young people, he said.

"In areas where there is violence and war," he said, "young people don't even have a future. The question about 'who do I marry?' isn't even in their vocabulary at this time because they're worried about being alive or having a job."

"It made me realize how blessed we are in the United States," he said.