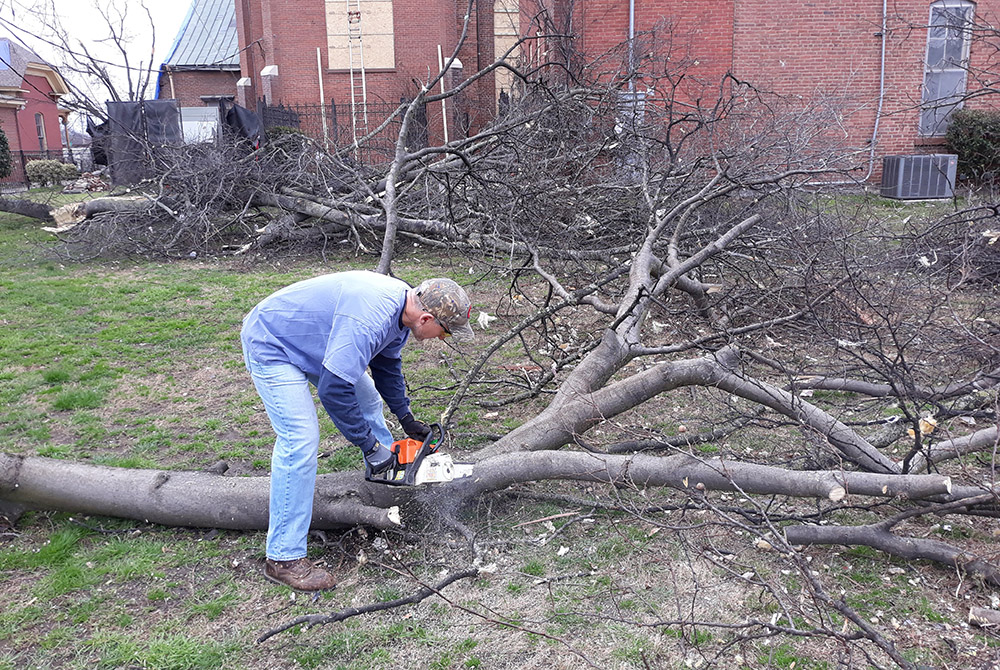 Wendy Apple, a volunteer at First Baptist Church in Putnam County, Tennessee, about 80 miles east of Nashville, described the damage from the March 3 tornado that swept through here, one of seven that swept the region.

"Destruction is so total and the debris so widespread that in many places you cannot even access where someone's house stood," she said.

As of March 8, the second Sunday of Lent, the official death toll through the entire region stood at 25.

Cookeville, home to St. Thomas Aquinas Catholic Church, suffered the majority of those fatalities, 18 in all. When NCR interviewed her March 6, Apple had been working at her church's relief shelter almost nonstop since Tuesday morning.

Her regular church roles include teaching children the Bible and working as the Sunday School secretary. Now she has another job, but with a lot of help as well.

"Countless families and communities, literally thousands from the surrounding areas and states have sent items in, and our fire department has used its vehicles to transport these gifts to places where they can be distributed," Apple said.

She noted that Tutco, a heating solutions manufacturer and one of Putnam County's largest employers, was hard hit. The company is using its various resources — including transportation — to reach affected areas that other parties cannot.

Apple said the path of one tornado covered 60 miles in all. As reported by the Nashville Tennessean, another tornado hit Cookeville, a city of about 33,000 people, some 80 miles east of Nashville.

Apple's family and home suffered no damage, but she told NCR that "it is impossible to sleep when you go home to change clothes and eat, because of all that has happened, but thankfully we have the St. Thomas Aquinas Catholic Church here, which has been a virtual godsend." 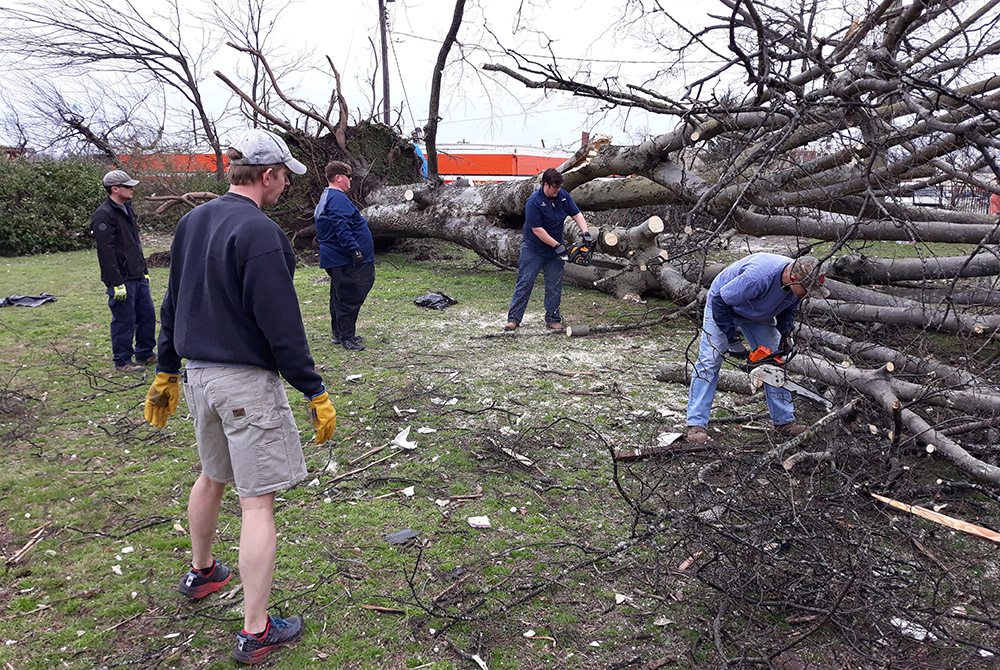 The parish, which has 650 registered families and a school with 328 students, "did not sustain any damage and everyone here came through all right," Fr. Dan Steiner, pastor, told NCR.

A tornado struck downtown, moved from the West Side to the city's North End, hitting heavily populated areas of Germantown, Donelson, and Hermitage.

Moving east, the storm struck Lebanon, the county seat of Wilson county, and Mt. Juliet, a suburb of Nashville.

Multiple churches of different faith denominations also suffered damage, as did dozens of houses — many totally destroyed — on the city's north side.

"I woke up to the sound of sirens and an otherwise eerie silence, one that told me a tornado was coming, and afterwards the next day, we began coordinating our relief efforts by phone," Steiner said, noting that volunteers have been working from early morning to 9 p.m., often replenishing resources at different sites as the supplies run out.

Steiner noted the importance of helping people during Lent.

"We're all members in the body of Christ; this is people acting through caring," he said. 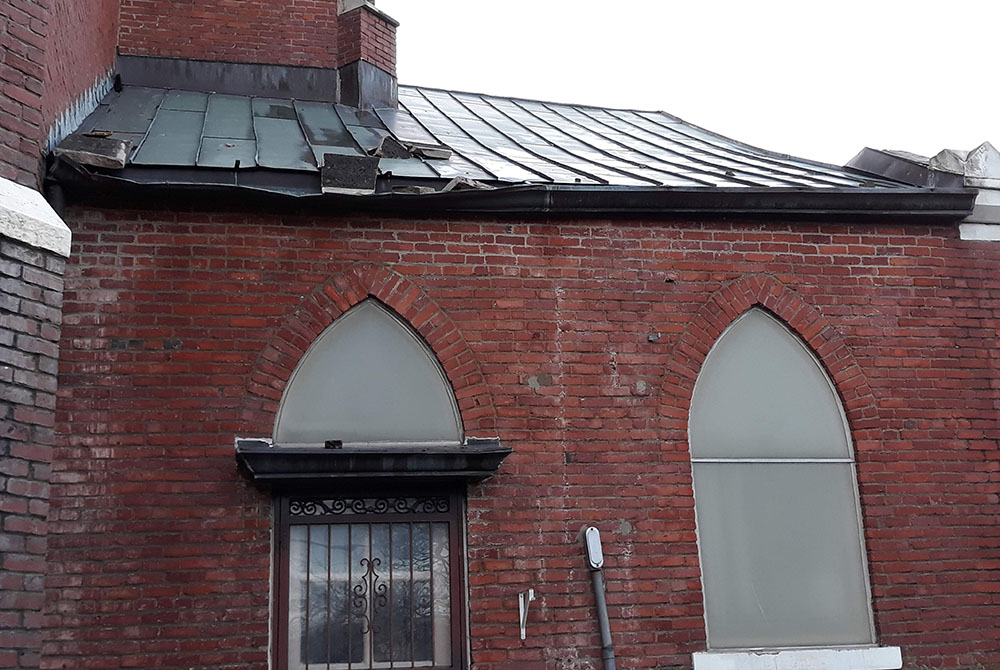 "It is the most seriously damaged church of them all, and will be unusable for a period of time," said Rick Musacchio, director of communications for the Diocese of Nashville. Mass for the parish is being offered at the nearby Monroe Street United Methodist Church.

Mark Cassman, Assumption parishioner, told NCR "our family went to Mass last Sunday, and then woke up at 1:30 a.m. Tuesday to sirens, and the knowledge that a tornado was coming."

Cassman's home was untouched — he lives outside of the tornado's path — and he went to the church immediately to assess the damage.

"I found trees all over the schoolyard, and our roof had been lifted up where it meets the bricks in the walls," he said.

Volunteers showed up at daylight and worked for six hours. Communication was limited to a Facebook post. Volunteers repeated their marathon efforts again over the next four days, but the widespread damage is still obvious.

"We have gutter and chimney damage; half of one wall is crumbled, and a piece of debris flew in through the solid brick of our sacristy wall, leaving an eight-inch wide hole," Cassman said.

The churches are trying to address the spiritual damage as well as the physical.

"This Sunday our Mass attendance was less than half, despite our offering services in two places; we figure that a lot of people must have gone elsewhere," Cassman said.

Fr. Bede Price, pastor, did his best to bolster spirits, Cassman said. "He reminded us that Mass has been celebrated on the battlefields, and in the Roman catacombs, but it has always been held."

Long-term repairs will probably affect the church's ability to hold its annual Oktoberfest this fall, the parish's financial bedrock, and people are worried about the effect of the shuttering on regular offerings and tithes.

Judy Orr, executive director of Catholic Charities of Tennessee in Nashville, told NCR that the recovery problem is "likely to be long-term" and that her organization's job is just beginning.

"We are working with our affected neighbors to help them get their basic needs taken care off, which is our role at the outset [of every disaster]," Orr said. "We anticipate working with survivors for many months and years to come, through case management and counseling."

Orr said that "the storm came as people slept around 1 a.m., and was very traumatic; some people had their homes falling on them in the dark, with only minutes of warning at best."

"Many of the people in the storm's path are long-time residents of historic neighborhoods close to downtown, and already burdened and challenged in many ways," Orr noted.