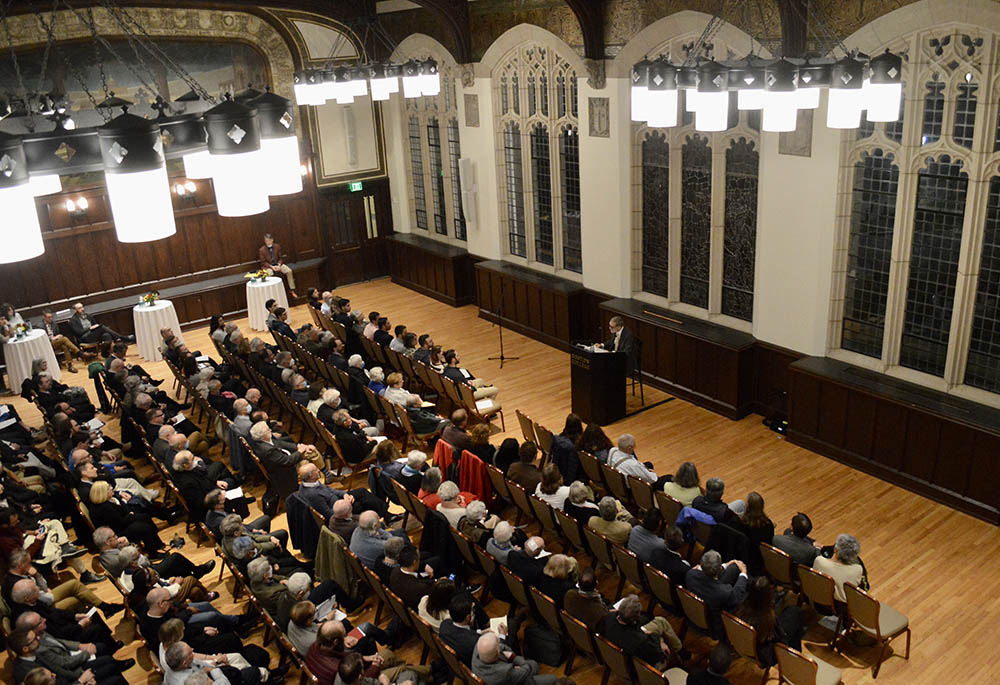 Theologians from across the U.S. gathered here Sept. 23-24 for a conference celebrating the legacy of Richard Gaillardetz, one of the country's foremost experts on the exercise of authority in the Catholic Church, who is receiving treatment for pancreatic cancer.

Opening the event to a standing-room-only crowd of several hundred at Boston College's Gasson Hall on Sept. 23, Gaillardetz delivered what he termed his "last lecture" amid a six-week pause in his chemotherapy regimen.

In an hourlong discourse that was at turns autobiographical, theological and deeply personal, the theologian encouraged his colleagues to continue the work of "meaningful and lasting ecclesial reform" and to seek out a middle path between over-critiquing the Catholic Church as an institution and being over-trustful of its leaders, especially after the clergy sexual abuse scandals.

Gaillardetz, who is author, co-author or editor of about a dozen books that have become standard texts in theology courses, said he saw a need for theologians to adopt a "reflective equilibrium" between trusting the church and critiquing it.

"Our church today is paying the price for our failure to maintain a reflective equilibrium," said the theologian.

"We are becoming divided into two camps, those who embrace the tradition, whole cloth, as a reality that stands beyond critique, and those whose sweeping denunciations leave us only a few salvageable fragments of a largely failed tradition," he said.

Gaillardetz particularly singled out what he termed a "pseudo-propheticism" among Catholics who mainly wish to critique the church.

"Today, in certain quarters, merely the whiff of being 'prophetic' curries ... untrammeled adulation," said the theologian. "Among more progressive, reformist Catholics, there is a temptation to applaud any and all criticisms leveled at church authorities, church structures or the received tradition, regardless of the objective merits of the critique itself."

Gaillardetz, who started his career in 1991 at the University of St. Thomas in Houston before moving to the University of Toledo in Ohio and then finally Boston College, is also a past president of the Catholic Theological Society of America, which is a major association of theologians across North America, and a former consultant to several subcommittees of the U.S. bishops' conference.

Theologians attending the Sept. 23-24 event praised Gaillardetz for his scholarship, his kindness as a colleague, and his impact on the students he has taught for some three decades.

Catherine Clifford, who co-authored the 2012 volume Keys to the Council: Unlocking the Teaching of Vatican II with Gaillardetz, called him "a generous mentor, teacher and colleague."

"I have always been impressed by Rick's work ethic and his commitment to collaborate with others to address pressing theological issues," Clifford, a professor of systematic and historical theology at St. Paul University, a pontifical Catholic institution in Canada affiliated with the University of Ottawa, told NCR. 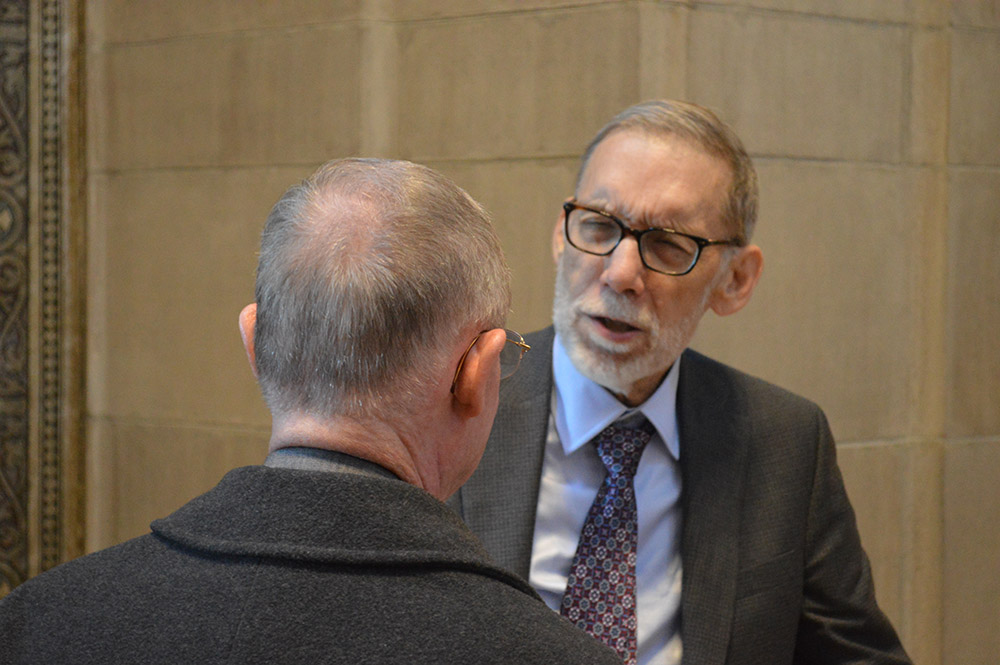 "He is always looking ahead, seeking a constructive way forward, yet never losing touch with the well-trodden path of tradition," Clifford said.

"Rick has never shied away from an honest assessment of the immense challenges that face the church in our time," said Clifford. "Yet his incisive criticism is always tempered with Christian realism and the virtue of hope in merciful God."

Charity Sr. Susan Wood, who served as president of the Catholic Theological Society of America immediately following Gaillardetz's term in that role, said his "most enduring legacy" would be his works on church authority, including his 1992 volume Witnesses to the Faith, his 1997 volume Teaching With Authority, and his 2018 volume By What Authority?, an expanded version of a text originally published in 2003.

Wood, who gave a keynote at the Boston conference and is a professor of theology and academic dean at Regis College, the Jesuit School of Theology in Canada at the University of Toronto, said Gaillardetz "does not dodge the hard questions such as the role of the sensus fidelium or how to navigate disagreement in the church."

Theologians in various posts across the U.S. spoke in similarly laudatory terms.

Peter Phan, a theologian at Georgetown University, praised Gaillardetz's effort to travel to various parts of the world to experience the Catholic Church in various contexts, including for his work in the 2008 volume Ecclesiology for a Global Church.

"What strikes me most is his willingness to learn about the church in its global dimensions," said Phan, also a former president of the Catholic Theological Society of America and winner of its John Courtney Murray award in 2010. "With this enlarged vision of global realities Dr. Gaillardetz has immensely enriched our contemporary ecclesiology."

Massimo Faggioli, a theologian at Villanova University, praised Gaillardetz particularly for his work in trying to address polarization in the U.S. church and in training young theologians.

"As a teacher, he trained a new generation of scholars that are now the ecclesiologists of our time, and at this time of ecclesial redefinition of terms, his contribution has given us young scholars with a sensus ecclesiae that will be crucial in the next few years," said Faggioli.

Gaillardetz's mentorship of his students was a major theme of the Sept. 23-24 conference. Three of his former pupils introduced the sessions on Sept. 24, and two of them, Elyse Raby of Santa Clara University and Jaisy Joseph of Villanova, also gave papers that day as part of a panel discussion exploring aspects of Gaillardetz's work.

In her paper, Raby challenged Gaillardetz's stance on whether there might be an authentic vocation in the church for people who decide to be single, as in choosing not to get married or to join the priesthood or a religious order. Raby said she hoped that "the greatest way a student can honor a teacher is to expand beyond the teacher's thought." 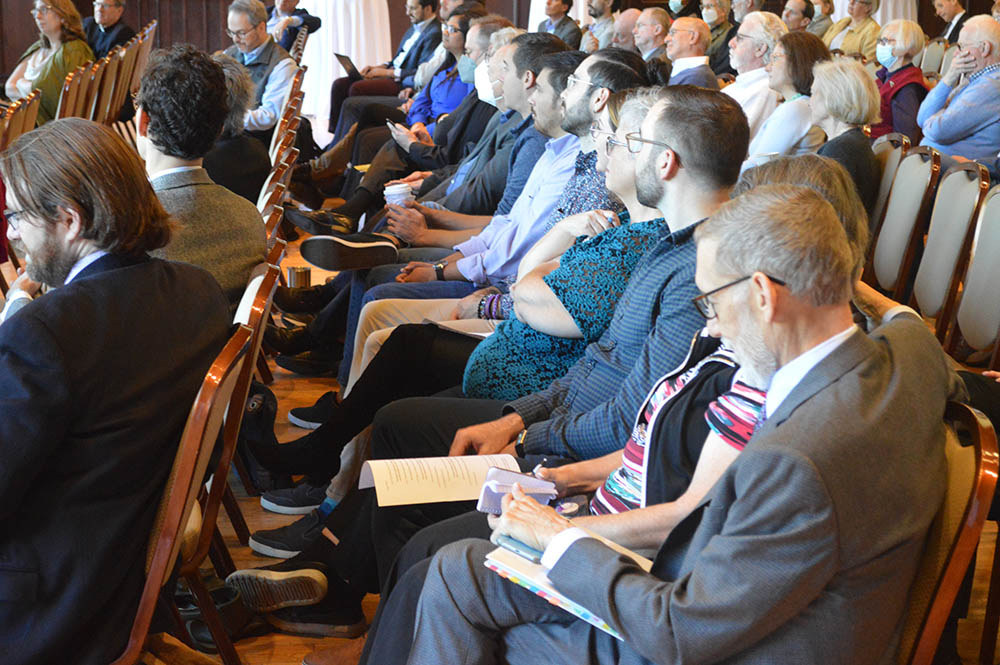 In remarks afterward, Gaillardetz said he was "delighted to be corrected" by his former student.

In his own "last lecture" on Sept. 23, Gaillardetz also warned the theologians present that polarization in wider society has been spreading into the church.

"This virus has infected our ecclesial and theological discourse ... and across the ideological spectrum," he said, using the example of how some Catholics have reacted to Pope Francis' decision to impose further restrictions on the pre-Vatican II Latin Mass.

"In the post-conciliar church, the liturgy has borne much of the burden of ecclesial polarization and with devasting consequences," he said. "A church that cannot pray together is a church that has lost its very raison d'être."

Referencing Francis' frequent exhortations for Catholics to create a "culture of encounter," Gaillardetz said the solution to the polarization "must lie in a commitment to sustained dialogical processes and the cultivation of habits, practices and dispositions that can transform our affective attachments and tribal tendencies, and encourage us to engage with love and care those with whom we disagree."

Gaillardetz only mentioned his cancer diagnosis toward the end of his talk, saying it had led him to "contend rather intensely with the finitude, brokenness and suffering that is our lot as God's creatures."

"I must confess to having, more than once, hurled my complaints heavenward against the seeming injustice of it all," he said. "But I have learned, oh so slowly, that a time often comes when our laments and protests, justifiable in their own right, must yield to a more contemplative posture. There we are invited into the gracious mystery of divine providence in which, even as we realize that the complete eradication of suffering and injustice eludes us, God's grace still abounds." 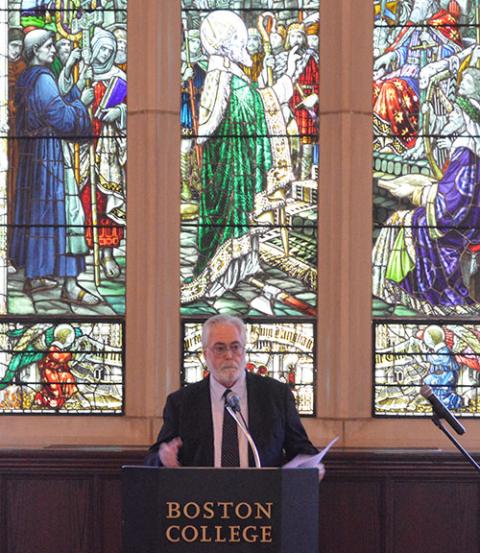 The presenters on Sept. 24 mainly shied away from mentioning Gaillardetz's health. But Dennis Doyle, who gave a comprehensive overview of Gaillardetz's decades of work, nodded toward it at the end of his presentation.

Doyle, a theologian who has retired from the University of Dayton, said he was struck by an account in Gaillardetz's 2002 book A Daring Promise: A Spirituality of Christian Marriage. Doyle recounted Gaillardetz's summary of a conversation with a friend in her 30s named Mary, who was receiving cancer treatment.

At the time, Mary told Gaillardetz that she had struggled with her faith but "through all these times of doubt, there is one thing I have never questioned ... there can be no rising without dying."

Said Doyle: "Mary did not fear her approaching death, because she had embraced death ... as a raw fact of her existence."

"Mary taught Rick," said Doyle. "Rick teaches us. And we should listen, and we should build on his legacy."

A version of this story appeared in the Oct 14-27, 2022 print issue under the headline: Theologian Gaillardetz warns against over-critique of church.