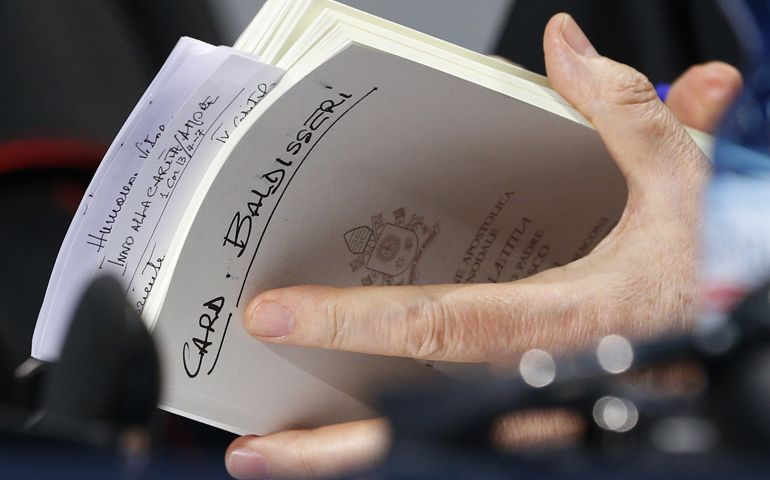 Cardinal Lorenzo Baldisseri, general secretary of the Synod of Bishops, holds his copy of Amoris Laetitia at the Vatican April 8. (CNS/Paul Haring)
This article appears in the Amoris Laetitia feature series. View the full series.

The discussion that has surrounded Pope Francis' apostolic exhortation on family life and marriage, Amoris Laetitia ("The Joy of Love"), has been a bit odd. Since its release in April, some corners of the Catholic community have questioned its weight, or authority, as a teaching document.

U.S. Cardinal Raymond Burke, for example, has said on several occasions that the document is "a mixture of opinion and doctrine" (a characterization never applied to Pope John Paul II's 1981 Familiaris Consortio, which was also an apostolic exhortation responding to a Synod of Bishops on the family). Such comments provoked the Vatican newspaper, L'Osservatore Romano, to run an article in August by a Spanish ecclesiologist, explaining that Amoris Laetitia is an example of the "ordinary magisterium" -- papal teaching -- to which Catholics are obliged to give "religious submission of will and intellect" (NCR, Sept. 9-22).

Discussions also have focused on what the document means, especially when addressing the thorny pastoral questions of Catholics in "irregular family situations" -- a phrase not all that pastorally sensitive in itself -- meaning Catholics who are divorced and remarried or Catholics living together outside a sacramental marriage. These issues were heavily discussed before, during and after the two Synods of Bishops that Francis convened in 2014 and 2015.

In Amoris Laetitia, Francis focuses on the importance and beauty of marriage and family life and the church's obligation to support and strengthen it. Some have taken that guidance to reinforce traditional teaching on the indissolubility of marriage. A leading advocate of this interpretation is Philadelphia Archbishop Charles Chaput, who attended the 2015 synod and chairs the U.S. bishops' ad hoc committee on implementing Amoris Laetitia.

To date, we do not know what the bishops' plans for the exhortation are, but the ad hoc committee was given a mid-September deadline for a plan of action. The administrative committee of the bishops' conference met in Washington Sept. 12-14, so we anticipate learning about the plans soon.

Chaput has issued guidelines for his archdiocese already. He is advising his priests to counsel Catholics in "irregular family situations" "to refrain from sexual intimacy" and from the sacraments. Catholics in these situations should not have any leadership role, or really much active participation, in the life of their parish, according to Chaput's guidelines.

"This is a hard teaching for many," he acknowledges, "but anything less misleads people about the nature of the Eucharist and the Church."

We would suggest that this is too narrow an interpretation of Amoris Laetitia. Theologians Todd Salzman and Michael Lawler (see story) make a theological argument for a different understanding of Amoris Laetitia, especially in regard to conscience. Their argument deserves close study.

Many have wondered why Francis doesn't clarify his thinking. Well, now he has, in a letter to Argentine bishops who sent their guidelines for implementing Amoris Laetitia in the Buenos Aires pastoral region to Francis, asking him for comment (see story). The guidelines challenge priests ministering to couples in complex situations not to speak of "permission to receive the sacraments," but to invite the couple into "a process of discernment."

The goal of this journey of discernment, the guidelines say, is for the couple to be "better integrated into the life of the church: a greater presence in the community, participation in groups of prayer or reflection, commitment to various ecclesial services." That may mean sacraments, it may not, but the question is open, to be worked out by the priest and the couple.

Francis responded: "The document is very good and completely explains the meaning of Chapter 8 of Amoris Laetitia. There are no other interpretations. And I am certain that it will do much good."

The NCR editorial on Amoris Laetitia's release (NCR, April 22-May 5, or online here) focused on what Francis said about conscience: "We can add that individual conscience needs to be better incorporated into the Church's praxis."

We said then, "Francis is again calling for an adult church." That call is even clearer today.

That editorial also called on bishops and all church pastoral leaders to take the time to study Amoris Laetitia deeply, to consult with the laity, and implement the exhortation with boldness and fearlessness. We repeat that call again today.

Religions that do not pursue peace are a contradiction, pope says