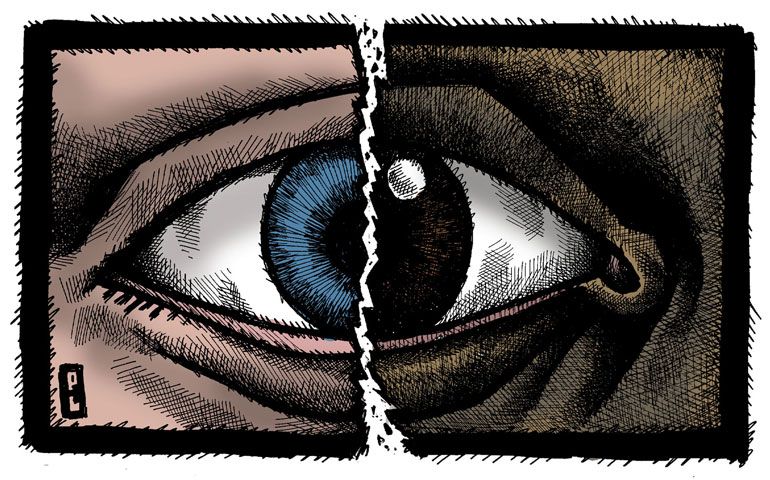 While many of Thomas Merton's books helped a broad lay audience understand and engage practices of Western mysticism and Buddhism, his prophetic and contemplative stance against white racism has yet to be understood, much less practiced, by a critical mass of white people of faith. Perhaps this is partially because he directly (yet compassionately) calls whites to confront our ongoing complicity in over-privilege and the oppression of people of color.

When Merton wrote "Letters to a White Liberal" in the early summer of 1963, in response to the signs of the times and Dr. Martin Luther King Jr.'s "Letter from Birmingham Jail" of April 16, 1963, he articulated an enduring spirituality of a contemplative in action. "Letters to a White Liberal" form the basis for the book Seeds of Destruction (Farrar, Straus and Giroux, 1964).

By "white liberal" Merton does not mean partisan progressives. Rather, he means any white person, especially a Christian, who claims good intentions toward all people, including African-Americans.

Seeds of Destruction begins by noting that the contemplative life is not an abstraction or a flight from the world. Monastic communities are fully implicated in the sinfulness of the world, Merton explains, and must witness to baptismal conversion into God's love in the midst of worldly egoism and injustice. When monastic communities remained silent in Europe in the first half of the 20th century, Merton notices, too often they were "publicly giv[ing] support to totalitarian movements."

Contemplatives, lay and monastic, are called to witness to God's mercy, truth and justice in the midst of earthly conflict. If he is to live a vow of poverty, Merton reflects, "it seems illusory if I do not in some way identify myself with the cause of people who are denied their rights and forced, for the most part, to live in abject misery."

The success of civil rights legislation "is not the end of the battle but only the beginning of a new and more critical phase in the conflict." (Italics in quotes reflect Merton's original emphasis throughout this article.) Changes in the law cannot change minds, hearts or the source of violence in society. As with King's analysis of the triple evils of racism, militarism and consumerism, so Merton sees white racism as intimately intertwined with militarism and the American propensity to put profits before people.

The contemplative must identify with people who are in any way oppressed or demonized by society. As long as white society "persists in clinging to its present condition and to its own image of itself as the only acceptable reality," then there is no room for real change and "inevitably there will be violence."

Merton believed that the nation stood at an impasse that demanded the transformation of society. The seeds of destruction are stuck in the ground of the desires of white people to maintain power and privilege over and against the fundamental dignity and human rights of the Negro (to use the language of the 1960s).

In Merton's estimation, there are two critical conditions for the possibility of white atonement. A genuine white response to African-Americans' thirst for love and justice, says Merton, must consist of two things:

In other words, the condition of the possibility of white people being transformed into the love of God and neighbor is the freedom of African-Americans to thrive as human beings.

Goodwill and charity are insufficient. Merton does not question white sincerity or generosity. Rather, creating social, political and economic structures that are just is constitutive of being transformed into God's love for the world. Even work for justice is insufficient without Merton's second point, a profound turning to African-Americans in their experience, wisdom and truth.

Merton calls whites to practice "Christ's kingdom of humility" by turning our full attention to people of color in the fullness of their humanity, as they are, not as whites imagine, fear or project them to be.

Jesus stands with the demonized of society as a way of calling us to transformation through lived solidarity and as a way of ending demonization. Thus Merton specifically invites white Americans to listen to the freedom and gospel songs, to read King's "Letter from Birmingham Jail" and James Baldwin's prophetic books, among many others. Turning to African-Americans means attending to the experience and wisdom of our Muslim brothers and sisters, including Malcolm X. This also means listening to contemporary perspectives, such as hip hop, as Laurie Cassidy expresses in our book forthcoming in early 2013, The Scandal of White Complicity in U.S. Hyper-incarceration: A Nonviolent Spirituality of White Resistance (Palgrave MacMillan) by myself, Cassidy and Margaret Pfeil.

Ultimately, Christ's love invites humility before all others who have given us life and who reveal God's infinite love for the world. When we enter the light of love of neighbor, there we enter Christ, our shared light and love, and walk the only way of hope for liberation and salvation.

[Reprinted with permission from JustSouth Quarterly, a publication of the Jesuit Social Research Institute, College of Social Science, Loyola University, New Orleans. Alex Mikulich is an a research fellow on race at the institute.]

A Christmas pageant of a different sort