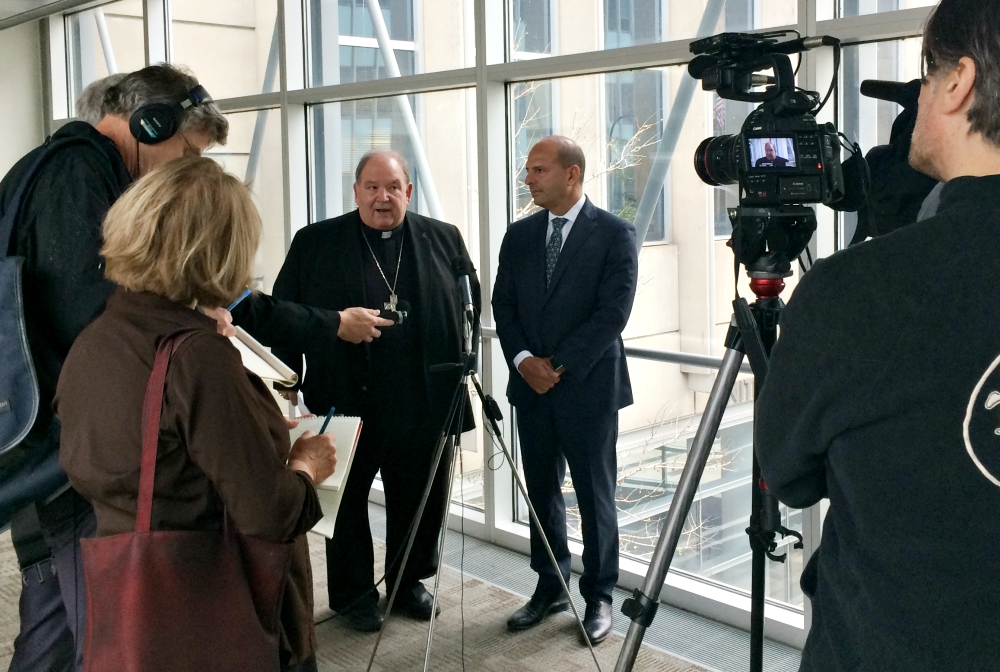 A U.S. bankruptcy court approved the $210 million joint settlement plan between the St. Paul-Minneapolis Archdiocese and 400-plus sexual abuse survivors, checking off one of the final steps in what has been a nearly four-year process.

At a hearing Sept. 25, U.S. Bankruptcy Court Judge Robert Kressel signed off on the plan, which drew near-unanimous approval from the 400 abuse survivors who cast ballots and who were among the 450 with claims in the bankruptcy proceedings.

The joint plan was reached May 30 among attorneys for the archdiocese and its creditors. It resolves all litigation against the archdiocese, its 187 parishes and related entities. A provision, known as a channeling injunction, protects them from future lawsuits related to abuse that occurred before the settlement's approval.

The archdiocese will contribute approximately $23.5 million to the $210 million settlement, with the bulk of the funds, roughly $170 million, coming from insurance carriers for the archdiocese and its parishes. The archdiocese will also make $1 million payments annually for five years to the trust set up to distribute the funds.

The plan has set a minimum of $50,000 to be awarded to each claimant. Over the next several months, a claims reviewer will divide out the funds based on the terms outlined in the reorganization plan. Attorneys expect that process to be completed by the end of the year.

Attorneys' fees, estimated at $20 million, will also come out of the settlement.

The Catholic Spirit, the archdiocesan newspaper, reported that the archdiocese anticipates it will be formally discharged by the court from bankruptcy in December.

The Twin Cities settlement is the largest sum reached through bankruptcy in the U.S. Catholic Church's decadeslong clergy sexual abuse scandal, and second-largest settlement overall. In 2007, the Los Angeles Archdiocese agreed to pay $660 million to more than 500 abuse survivors.

In a statement read during the hearing, St. Paul-Minneapolis Archbishop Bernard Hebda apologized to abuse survivors "for the horrific things done to you by people you should have been able to trust."

He added they "have been the catalyst for needed change" in the archdiocese that has included the implementation of new policies, oversight and personnel.

"I hope this resolution brings some measure of justice to you," Hebda said. "Yet, I know that no amount of money will make up for the horrors you experienced and for the far-too-frequent failures by priests and bishops. Inexcusable failures that went on for way too long."

Jeff Anderson, one of the attorneys representing abuse survivors in the proceedings, said the united effort of survivors has brought about actions that have made children and the community safer.

"The resolution of this chapter in the journey can bring some comfort to all," Anderson said in a statement. "The credit is deserved exclusively by the survivors, who had the courage to stand up for their truth and to stand against the attempt by the Archdiocese to shut them out and diminish the power that each of them has exercised individually and collectively."

The archdiocese filed for bankruptcy in January 2015, approximately a year and a half after the passage of the Minnesota Child Victims Act, which opened a three-year window into the state statute of limitations on filing sex abuse lawsuits. In fall 2013, revelations of mishandled abuse allegations — centering around now-former priest Curtis Wehmeyer — and lax policies rocked one of the largest dioceses in the Midwest.

The fallout yielded the disclosure of 91 credibly accused priests, 100,000 pages of documents, court oversight of the archdiocese for four years, and major upheaval in the chancery, including the resignations of Archbishop John Nienstedt and Auxiliary Bishop Lee Piché. Nienstedt left his post amid allegations of sexual misconduct with adult males, including seminarians. The findings from an investigation into the accusations, overseen by the archdiocese, have not been publicly released.

Abuse survivors rejected the archdiocese's first proposal of $65 million and a second offer of between $155 million and $162 million. In May 2017, creditors voted to approve their own plan that sought $80 million from the archdiocese, with the option to pursue future litigation against insurers.

In the statement he read to abuse survivors at the hearing, Hebda referenced the pectoral cross he wore as a reminder "that the greatest good can come from the greatest evil."

"It gives me hope that it is indeed possible for hearts to mend, suffering to ease and trust to return. As we all take next steps, be assured that that will be my hope and prayer for each of you who are survivors. I would welcome your assistance as we work to keep our children safe. I thank you for helping our church change for the better," the archbishop said.

A version of this story appeared in the Oct 19-Nov 1, 2018 print issue under the headline: Twin Cities $210 million bankruptcy settlement approved.