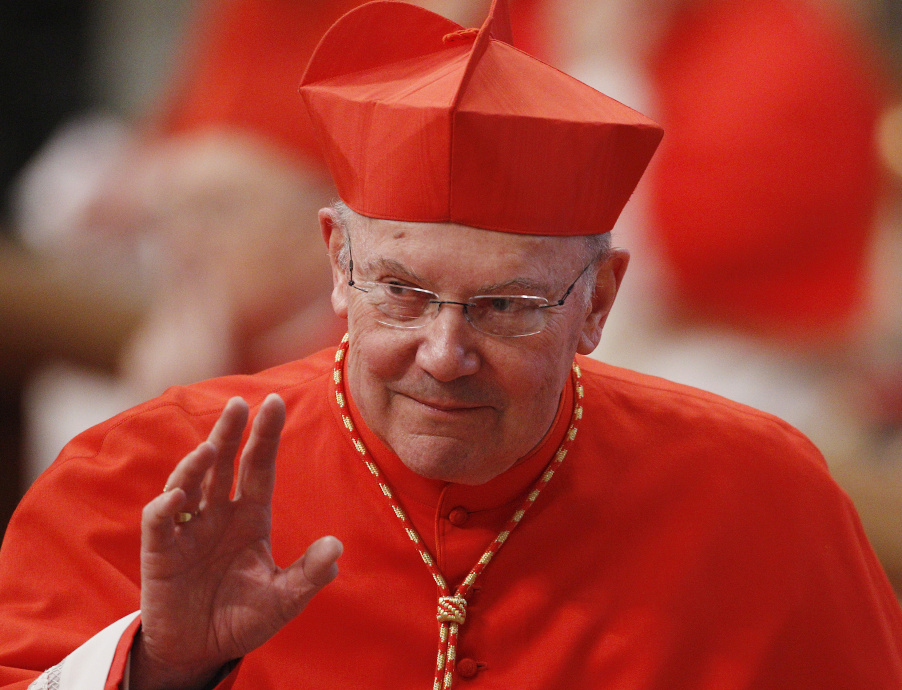 Cardinal William J. Levada, the former archbishop of San Francisco and of Portland, Ore., and the retired prefect for the Vatican Congregation for the Doctrine of the Faith, died in Rome Sept. 26, 2019, at age 83. He is is pictured in a Nov. 21, 2010, photo. (CNS photo/Paul Haring)

When Cardinal Joseph Ratzinger was elected Pope Benedict XVI in 2005, he named then-Archbishop Levada to replace him as head of the Congregation for the Doctrine of the Faith, the Vatican agency charged with protecting and promoting the church's teachings on faith and morals. It was the first time a U.S. prelate had headed the congregation, and Levada served in that position until 2012.

Before his Vatican appointment, he had served as archbishop of San Francisco since 1995; archbishop of Portland, Oregon, 1986-95, and an auxiliary bishop of Los Angeles, 1983-86.

For decades, he was a frequent collaborator with the Vatican and with the future Pope Benedict. He was a doctrinal congregation staff member from 1976 to 1982 and was a bishop-member of the congregation beginning in 2000. In the 1980s, he worked with then-Cardinal Ratzinger as one of a small group of bishops appointed to write the "Catechism of the Catholic Church."

Levada was a key figure in the church's efforts to eliminate priestly sexual abuse. He headed the Vatican agency that oversaw the handling of priestly sexual abuse cases; in 2002, he was a member of the U.S.-Vatican commission that made final revisions to the sex abuse norms in the United States, which laid out a strict policy on priestly sex abuse and provided for removal from ministry or laicization of priests.

In an interview with the Irish Catholic in 2013, Levada said: "If you are working for the Congregation for the Doctrine of the Faith, it helps to have a pretty thick skin so that you aren't overly sensitive if you are criticized." However, he also said that the congregation should not be above criticism.

In a 2006 decision approved by Benedict, Levada ruled that 86-year-old Fr. Marcial Maciel Degollado, founder of the Legionaries of Christ, should not exercise his priestly ministry publicly. Degollado was accused of sexually abusing minors, but the Vatican said it would not begin a canonical process against him because of his advanced age and poor health.

In 2009, Levada ordered a doctrinal assessment of the Leadership Conference of Women Religious, a Maryland-based umbrella group that claims about 1,500 leaders of U.S. women's communities as members. Three years later, he appointed then-Archbishop J. Peter Sartain of Seattle to provide "review, guidance and approval, where necessary, of the work" of the LCWR. 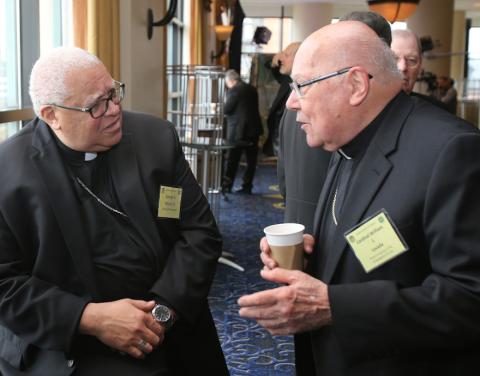 Bishop George V. Murry of Youngstown, Ohio, chats with Cardinal William J. Levada Nov. 14, 2017, during the fall general assembly of the U.S. Conference of Catholic Bishops in Baltimore. Cardinal Levada, former archbishop of San Francisco and of Portland, Ore., and the retired prefect for the Vatican Congregation for the Doctrine of the Faith, died at age 83 Sept. 26, 2019. (CNS photo/Bob Roller)

The appointment came the same day the congregation released an eight-page "doctrinal assessment" of the LCWR, citing "serious doctrinal problems which affect many in consecrated life," and announced a reform of the organization to ensure its fidelity to Catholic teaching in areas including abortion, euthanasia, women's ordination and homosexuality.

The LCWR national board criticized the Vatican's action as "based on unsubstantiated accusations and the result of a flawed process that lacked transparency," saying it had "caused scandal and pain throughout the church community and created greater polarization." The process ended in 2015 with no new disciplinary measures or controls.

Levada warned that "this, ultimately, makes the pope less a sign of unity and (instead) a sign of division, which he is not."

He said he was impressed by Francis' "reminders to the church and the world about the poor, people who are easily forgotten or put aside out of our mind and vision."

On the decision of Benedict to resign, Levada said he believes that was "a giant step in regard to the future of the church and the future of the papacy, so that this particular question can be resolved by any future pope because of what he (Benedict) has done."

As archbishop of San Francisco, Levada dealt with the issue of same-sex marriage. In 2004, he helped lead a prayer rally for the defense and promotion of marriage after the city decided to issue same-sex marriage licenses.

In 1997, he opposed a city ordinance requiring all agencies contracting with the city to provide spousal benefits to domestic partners of their employees. Noncompliance could have jeopardized the church's social service contracts with the city.

At the archbishop's urging, the city changed the ordinance so that employees of church agencies could designate any legally domiciled member of their household for spousal benefits.

William Joseph Levada was born June 15, 1936, in Long Beach, California. His great-grandparents had immigrated to California from Portugal and Ireland in the 1860s.

After seminary studies in California, he was sent to Rome's Pontifical North American College, earning a doctorate in theology at the Pontifical Gregorian University. He was ordained a priest in St. Peter's Basilica Dec. 20, 1961.

He returned to the Archdiocese of Los Angeles and worked as an associate pastor, teacher and campus ministry chaplain. In 1976, he returned to Rome as a staff official of the doctrinal congregation. During his six years of service there, he continued teaching theology part-time at Gregorian University.

He returned to California in 1982 and was named secretary of the California Catholic Conference, a public policy agency of the state's bishops. He was named an auxiliary bishop of Los Angeles in 1983 and was ordained a bishop March 25 of that year.

Benedict elevated him to cardinal in 2006.