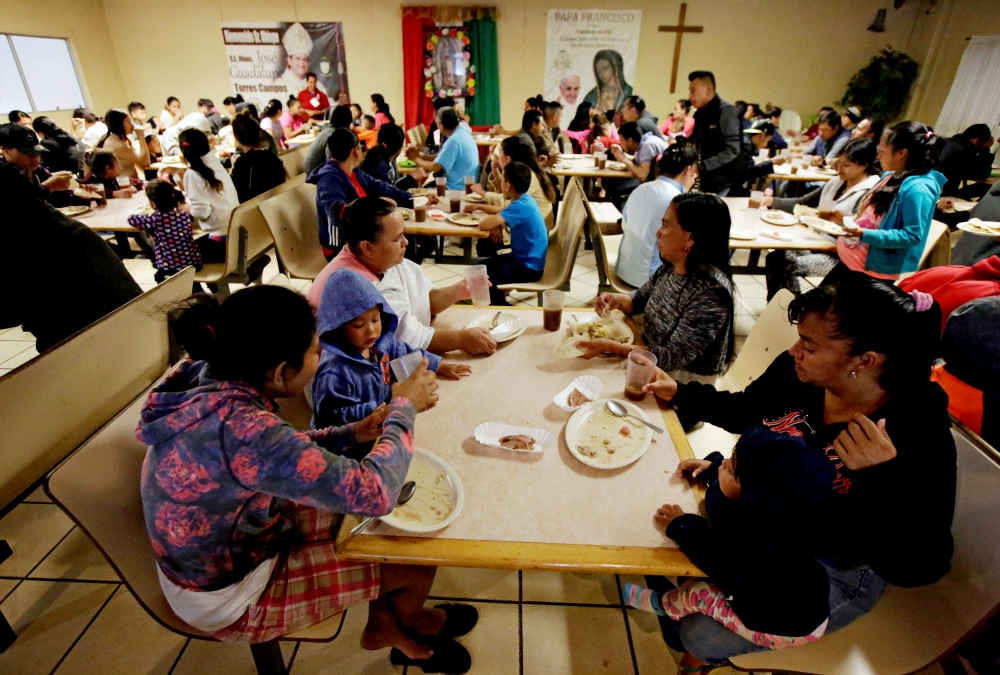 Immigration policies rolled out during the Trump administration have spread fear among immigrant populations in the U.S., but Catholic organizations and parishes have responded with renewed efforts focused on helping those groups, a new survey says.

The Federal Enforcement Effect Research Survey, also called the FEER survey, released June 12 by the Center for Migration Studies in New York, analyzed the impact of intensified immigration enforcement on the work of Catholic organizations and other faith-based groups that work with immigrants.

While many studies have focused on the effect of the policies on immigrants, few have looked at how those policies have affected and changed the nature of Catholic and other faith-based organizations.

One of those changes is that organizations that were helping refugee resettlement nationally now help asylum seekers at the U.S. border with Mexico.

"We have certainly witnessed a change in both our own department but also across the country in the work of the Catholic Church at large in welcoming the stranger," said Bill Canny, executive director of the U.S. Conference of Catholic Bishops' Migration and Refugee Services. Canny participated in a webinar June 18 addressing the findings of the survey.

One of the changes for institutions such as Migration and Refugee Services, Canny said, came about with the Trump administration's drastic reduction of refugees allowed into the country. Since Congress passed the Refugee Act in 1980, the U.S. had admitted on average 95,000 refugees annually, and faith-based agencies, including many Catholic organizations, had since then stepped in to help with resettlement.

The number of refugees allowed into the country was capped at 45,000 after Donald Trump became president in 2017 and was scaled back to 30,000 refugees for fiscal year 2019. However, the cap does not reflect the actual number of those allowed to enter, it's simply a limit.

"This had a relatively dramatic effect on the infrastructure that had developed over the last 30 years," which was a well-oiled network dedicated to helping refugees and their families integrate into the country, Canny said. "There were some 320 affiliates across the U.S. in all states who were receiving refugees and the Catholic Church, primarily Catholic Charities, represented about 90 of those."

These days, 45 of those Catholic affiliates remain, Canny said, adding that at the same time that the refugee cap was shrinking, the number of asylum seekers was rising at the southern border.

"Nine resettlement agencies including our own, interestingly, began to turn their attention and resources toward those asylum seekers," he said.

"You had a bit of an awakening," Canny said. 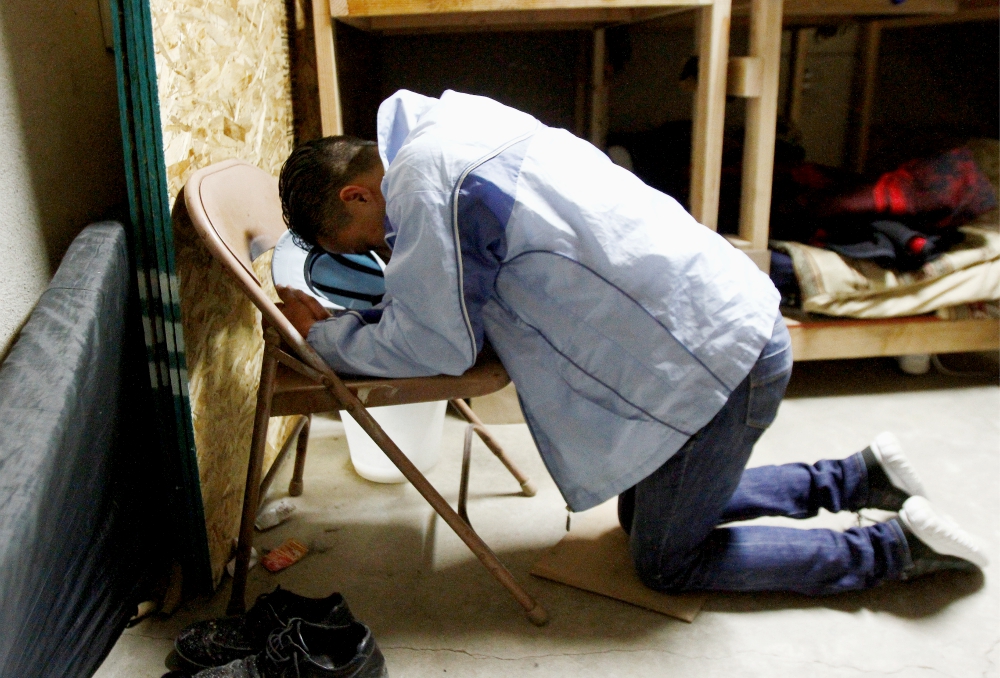 A Honduran migrant prays at a shelter in Tijuana, Mexico, March 19 while awaiting legal proceedings for his asylum case. (CNS/Reuters/Jorge Duenes)

Last year, Migration and Refugee Services, which had focused on resettlement, instead mobilized to reunite families separated by a government policy that took children away from parents or guardians if they had entered at the U.S. southern border without documents. After great backlash and public outcry, the government sought the help of Catholic organizations as well as Lutheran Immigration and Refugee Service to help after U.S. courts stepped in to stop the separations and demanded that families who had been separated be reunited by a particular date.

Donald Kerwin, executive director of the Center for Migration Studies, and one of the authors of the survey, said Catholic organizations have been making "extraordinary efforts to adapt and to serve immigrants despite all these various issues."

The Catholic Legal Immigration Network (CLINIC), for example, has dispatched staff to provide legal help along the U.S.-Mexico border and support for those helping immigrants forced to wait in Mexico until their asylum cases are heard, a new requirement of a policy announced by the Trump administration in late 2018. The "Remain in Mexico" policy requires those seeking asylum to petition at ports of entry and then wait for legal proceedings in Mexico until U.S. courts can hear their case.

Even as Catholic organizations have stepped up efforts to help, the fear some immigrant communities are experiencing is getting in the way of that help. Many are afraid of attending legal consultations that might help with their immigration status, accessing food and even applying for a public service they're eligible for, because of fear of deportation or that it might affect chances at citizenship in the future, Kerwin said.

The Trump administration has discussed instituting a "public charge" policy that would hurt immigrants' chances at permanent residency, citizenship and even threatened deportation for those who sign up for public benefits. Some immigrants can't tell what kind of help could harm them.

"These are obviously kind of very serious problems, most of all for immigrants, but also for Catholic agencies who are doing extraordinary work in trying to work around these problems," Kerwin said.

Brian Corwin, executive vice president for Member Services of Catholic Charities USA, said clients are afraid to ask for help at food pantries and soup kitchens and don't want to sign up for Supplemental Nutrition Assistance Program (SNAP) benefits for their U.S.-born children, who are eligible, because they are afraid it will affect another family member's immigration situation.

"People are afraid to come forward, to get help," said Corwin, who also participated in the webinar.

He recalled that a session to get families to sign up for the SNAP program, also known as food stamps, resulted in people not wanting to take the application. Even the few who did said they likely weren't going to fill it out "because of fear that it might affect their immigration case and fear that their green card [a residency card] might be revoked," Corwin said.

Rampant misinformation, mistrust and "fear of the current rhetoric" are reasons people aren't seeking help, said staff at one California Catholic Charities, according to Corwin.

"We haven't even begun to do research on [housing] and the issue of mixed family status," he said.

But there are "bright lights" as agencies push to keep helping by working with dioceses and parishes, saying that they're "going to do something regardless of the climate," Corwin said.

In places such as Minnesota, when attendance at Mass and other parish events waned after immigrants were apprehended and deported, church workers vowed to think differently. Sensing the fear parishioners had of leaving the house, one priest decided to take Mass to them — to an apartment complex.

"It was a great success," said Estela Villagran Manancero, director of Latino ministry for the Saint Paul-Minneapolis Archdiocese, who participated in the webinar.

During major events, some parishes rented large buses to pick up parishioners who were afraid to drive lest they be detained, she said.

"It's a little more expensive, but then we all can have security that they will not be detained," said Villagran.

Parishioners in Minnesota also have organized so they can tag along, or drive those who are afraid, to doctor's appointment, court dates, to take their children to school, Villagran said.

"I think people that are serving are very much committed," she said.

The survey mirrors what a lot of the organizations and parishes such as the ones in Minnesota are experiencing, Kerwin said, that "here's more accompaniment ... more services designed and geared to the moment that we're living in. I think charities and parishes are very much focused on this issue."