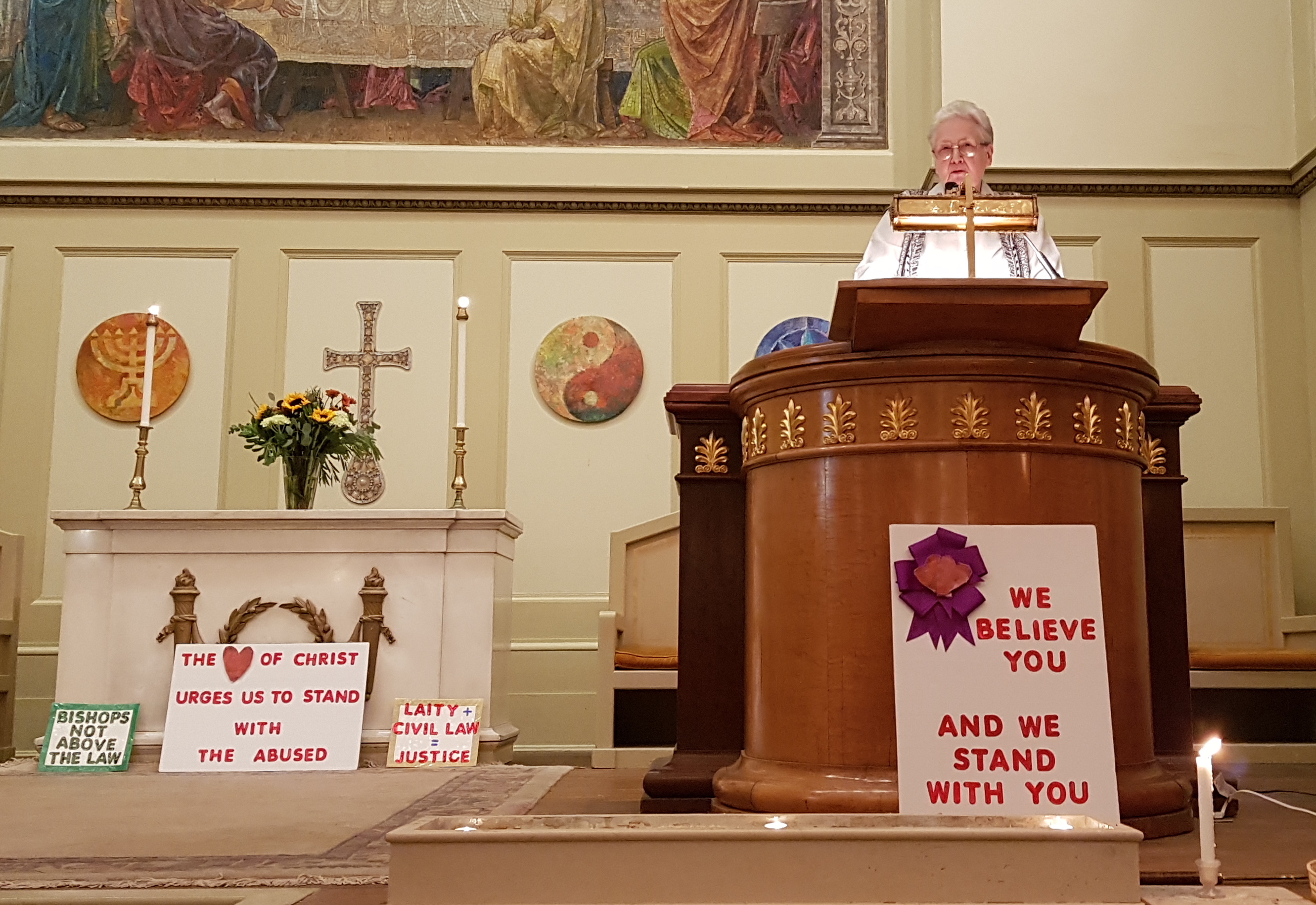 The Catholic Church has reached a crossroads. Its leaders can either change, become open and accountable, or maintain the status quo: an institution lacking transparency, wrapped in secrecy and beholden to a clerical culture that is at the heart of the institution's problems.

That bleak assessment was made by Marie Collins, the Irish clerical sexual abuse survivor who was an original member of a papal commission dealing with the sex abuse crisis, and who said she is "hanging on by my fingernails."

The scandal, she said in remarks Sept. 8 opening a five-city U.S. tour, is both systemic and global, and clericalism remains at its core.

"The church is at a crossroads. It can either continue to behave as it has for centuries, protecting itself, or open up and become the church we all want it to be, the church that it should be."

Collins, in a separate interview with NCR following the news conference, expanded on her understanding of clericalism and how it played into her decision to resign, after serving for three years, from the Pontifical Commission for the Protection of Minors.

During the past 20 years, she said, the church "has been reactive" and "has not changed one single thing unless forced to by survivors and those in the media. ... I don't believe the church has made any changes of its own volition." She made her remarks at the United Methodist Building on Capitol Hill at the outset of her tour, titled, "A Crisis of Culture: Seeking Justice to Reclaim the Church."

Comparing the task facing the church to the Herculean labor of cleaning the Augean stables, Collins said she believes significant change can occur only with continuous pressure "by lay people who love the church."

Her time of service on the newly formed papal commission from 2014 to 2017 provided a rare look for a lay woman at the workings of the Roman Curia, the Vatican congregations and offices comprising the highest levels of governance in the church. She came away from that experience, she told NCR, convinced that "it's like a giant boys' boarding school."

She described her time on the commission as a series of frustrations and realizations that some in the Curia were intent on stifling the group's work from the outset.

She said the first meeting at the Vatican turned out to be a harbinger of what was to come. The room where it was held contained a bare table and chairs. "No pens, no pads, not even water," she said. When she asked who was going to take minutes of the meeting, she said the cleric secretary answered there was "no one in the Vatican available to take minutes."

She said the commission was not provided a budget, was told there was no money to hire experts to aid their work, and that no funds were available for working group meetings between the main gatherings. "You know, you have some cardinals paying millions to renovate their apartments and things, you have hundreds of millions paid out in compensation to survivors. We're trying to keep children safe to prevent survivors in the future and we weren't given a budget."

In August 2018, she met with Pope Francis during his trip to Ireland. It was the year after she had resigned from the papal commission. At the time, she gave the pope credit for a frank exchange with a group of survivors, but said she was disappointed that important initiatives suggested by the commission were not moving ahead.

"I got to meet the pope and say what I wanted to say. I may not have got the answers I wanted — all you can do is ask the question, and I did," she wrote in the Irish Times.

In the interview here, she said during their exchange that Francis told her that "the commission was not honest with me" and that he could now trust it because it had been incorporated into the Curia.

She said she asked him "In what way were we not honest with you?" According to Collins, he replied, "I won't speak about the past."

"I couldn't get an answer," she said. "Who had told him that? Who had been saying things to him about those members and the honesty of the commission? I never got to the bottom of it."

When she asked who was going to take minutes of the meeting, she said the cleric secretary answered there was "no one in the Vatican available to take minutes."

In one instance, she said, she asked during a meeting about the status of a proposal for an accountability tribunal that had been advanced months before and handed on to the Congregation for the Doctrine of the Faith for implementation. Her question had been posed to Claudio Papale, a professor who also worked for the CDF. She said that Msgr. Robert Oliver, secretary of the commission, intervened and attempted to prevent Papale from answering, saying the question placed the professor in a difficult position.

Collins said that Boston Cardinal Sean O'Malley, president of the commission, eventually intervened and allowed Papale to respond. Collins said Papale told the group that the proposal had been blocked by the CDF and would never be implemented.

Some months later, after an inquiry from NCR, the Vatican acknowledged that Papale had resigned from the commission for personal reasons.

As an indication of curial meddling, she recounted her attempt to nominate Juan Carlos Cruz, a survivor from Chile, to membership on the commission. She has posted on her website a number of emails demonstrating efforts by a Chilean cardinal and the nuncio to Chile to block both his appointment to the commission and his invitation to speak at a conference in Rome.

One of the emails mentioned O'Malley, proof, Collins said, that he knew that members of the hierarchy were attempting to interfere with the work of the commission. She said when she asked O'Malley during a meeting why he had not informed the group of that attempt: "He didn't answer. He just shrugged his shoulders."

In response to a question, O'Malley's spokesperson Terrence Donilon responded that he was in "no position to comment on Marie's recollections. The cardinal's position and actions with respect to the situation in Chile is both public and well known. This includes his support of Chilean victims." He added that O'Malley "has great respect for Marie and her ongoing commitment to child protection and transparency." 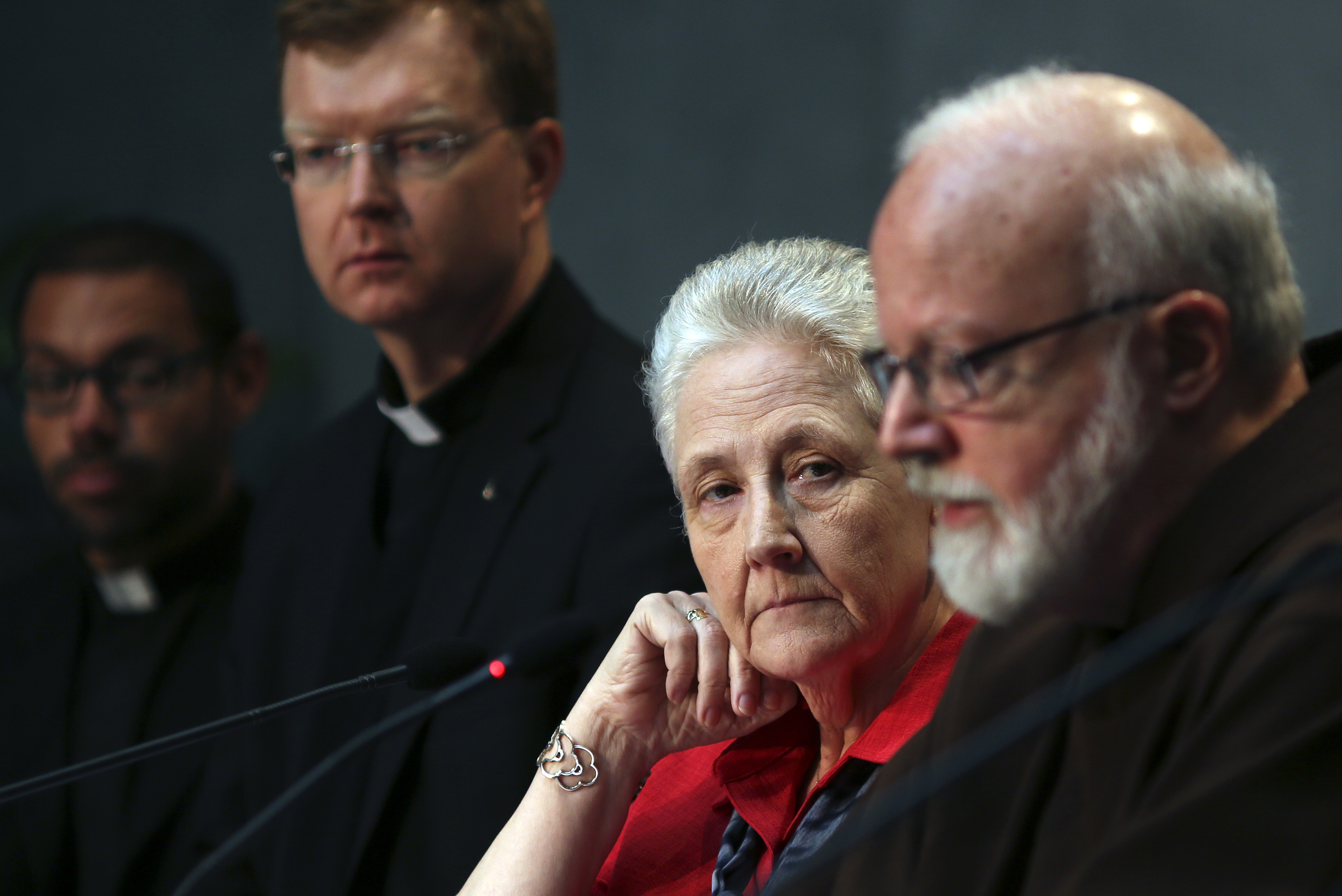 Marie Collins, center, then member of the Pontifical Commission for the Protection of Minors, watches as Cardinal Sean P. O'Malley of Boston, president of the commission, speaks during a briefing at the Vatican May 3, 2014. Collins, who left the commission, told the Irish Times that Pope Francis "should admit responsibility the Vatican and church leadership hold for past events in Ireland." Also pictured is Jesuit Father Hans Zollner, a professor of psychology and president of the Center for Child Protection at the Pontifical Gregorian University in Rome. (CNS photo/Reuters/Alessandro Bianchi)

Indeed, Collins, in turn, expresses her respect for O'Malley, but says that the incident is indicative of the pervasive nature of the clerical culture.

In addition to her regard for O'Malley, she gives high marks to Maltese Archbishop Charles Scicluna, the Vatican's chief abuse investigator, for his work on behalf of victims and in rooting out the truth in places like Chile, and to Dublin Archbishop Diarmuid Martin.

"I have a lot of time for Scicluna," she said. "I have met with him. I think he, in the old phrase that we don't use much now, he gets it, he really does. He gets things done. He is not intimidated by anyone with a greater title than he has. He will go in, as he did in Chile, and ask the questions that need to be asked."

As for Martin, she thinks if it weren't for the clerical culture "he'd have a red hat by now." That he has not been named a cardinal she believes is due to the animosity of other Irish bishops toward him for his role in helping to expose the extent of clergy sexual abuse of minors in Ireland. Martin, who worked in the Vatican most of his career, was appointed archbishop in 2004 and shortly thereafter began reading through the voluminous documentation on sex abuse in the records of the archdiocese. He handed over some 70,000 documents to a government commission studying the scandal.

"He's totally different and I think his skill and experience should have been used at the Vatican level. Instead, he's been isolated and ignored," Collins said. "In my view, he should have been on the papal commission for the protection of minors because his experience in Dublin was excellent." She said his child protection office in Dublin could be used as "a blueprint and put in every diocese."

He is not popular with other bishops and many priests, she said, because he reversed the strategy of his predecessor, who worked to keep the files secret, and consequently "is looked on as a betrayer" by the clergy. But, she contends, he is deeply respected by lay Catholics and non-Catholics in Dublin.

He is, she said, an example of what happens when someone bucks the clerical culture.

While claiming she has no ready answer for the clerical culture — they have to ask themselves the question of how the crisis came to be, she says — she did have a suggestion for dealing with the Curia.

She described the Vatican as "a bubble" teeming with ambitious clerics. "There's this climbing the slippery pole and the whole thing is getting to the top. And it's a hothouse of gossip and all this other stuff." She said if she had her way, she would put everyone who works in the Vatican "on a five-year term, and I would send them back to their parish or whatever for a length of time, and then they can come back. I wouldn't keep them there for eternity."

Her tour, with scheduled stops in Baltimore, Philadelphia, Chicago, New Orleans and Los Angeles, was organized and sponsored by 13 church reform groups.

[Tom Roberts is NCR executive editor. His email address is troberts@ncronline.org. Follow him on Twitter at @NCRTROB.]

*The caption for this photo has been updated with the correct location.

A version of this story appeared in the Oct 4-17, 2019 print issue under the headline: On US tour, Marie Collins exposes clerical culture behind abuse cover-up.