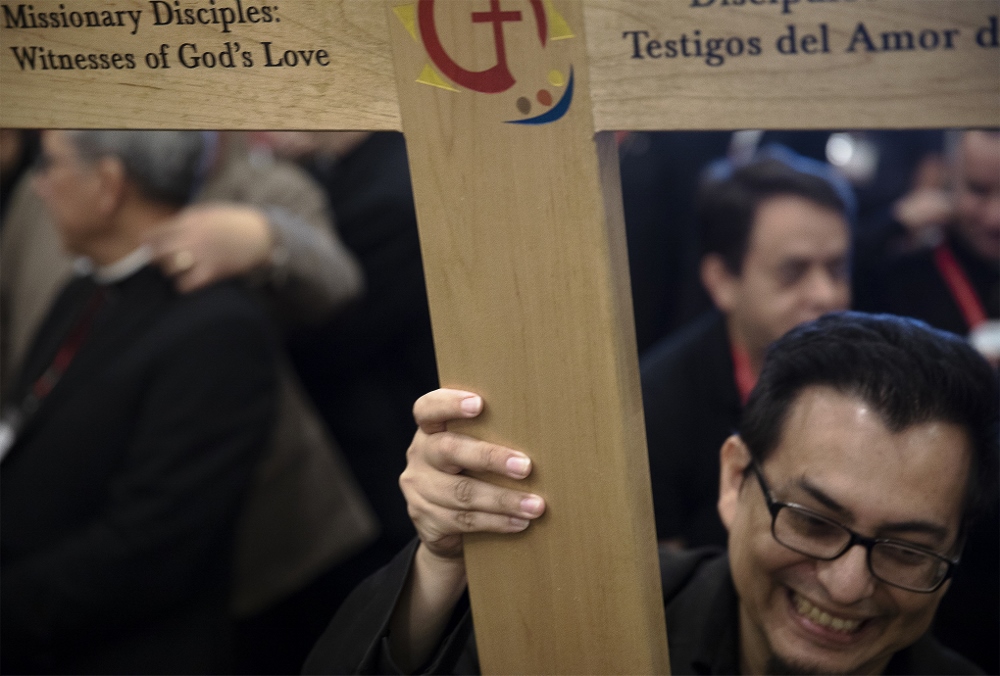 A delegate carries an encuentro cross Sept. 20 prior to the start of the Fifth National Encuentro, or V Encuentro, in Grapevine, Texas. (CNS/Tyler Orsburn)

A procession of banners and wooden crosses opened the V Encuentro Sept. 20, as Hispanic Catholic delegates from the 14 regions in the United States gathered in celebration, sharing how the process has so far influenced their parishes, dioceses and regions.

The national encuentro (Spanish for gathering, but in the spirit of "encounter") comes halfway through the four-year grassroots consultations. Since 2016, Hispanic Catholics have been meeting at the parish, diocesan and regional levels to articulate their needs, concerns and gifts as the burgeoning majority of U.S. Catholics, charting pastoral plans locally.

Now at the Gaylord Convention Center outside Dallas, roughly 3,000 representatives from the various encuentros are meeting Sept. 20-23 to share what they've experienced the past couple years: how they've reached Hispanic Catholics on the peripheries, how they've inspired young leaders, how they organize their Hispanic ministries, and much more. The next two years will include an evaluation of the process, building on the mission set forth.

Though the demographics of the local encuentros varied, the national gathering was intentional with its attendees, calling for a group to reflect the church's future tapestry: Thirty percent are those younger than 35; 30 percent are new or emerging leaders; 30 percent are seasoned leaders; and 10 percent is staff.

For Maria Vazquez, a Puerto Rican from the Diocese of Orlando, Florida, meeting with people from parishes all over the country has been an early favorite experience, as they share how they've been reaching people who have distanced themselves from the church.

For many, "their main priority right now is to get their right papers, find work, school for their children, so religion and church keeps falling behind," she said.

Silvio Infante, a Peruvian who came with Vazquez from Orlando, said they're excited to exchange information, learning from others while also sharing "what we bring from our diocese to here, and learn about the concerns of other Hispanic Catholics — why they're not coming back to the church or aren't close to the church, especially if they were before."

Mercy Sr. Ana María Pineda, an associate professor in the Department of Religious Studies at Santa Clara University who has been involved in encuentros since the 1970s, started the Sept. 21 addresses with a talk on the "historical memory" of the encuentros.

Recognizing that Hispanic/Latino history "stretches back to a time marked by conquest and struggle," Pineda said God had remained faithful throughout the community's journey, nourishing them in the desert with "the gift of national gatherings of Catholic Hispanics who sought out not only their place in the church, but how to live out their baptismal commitment." 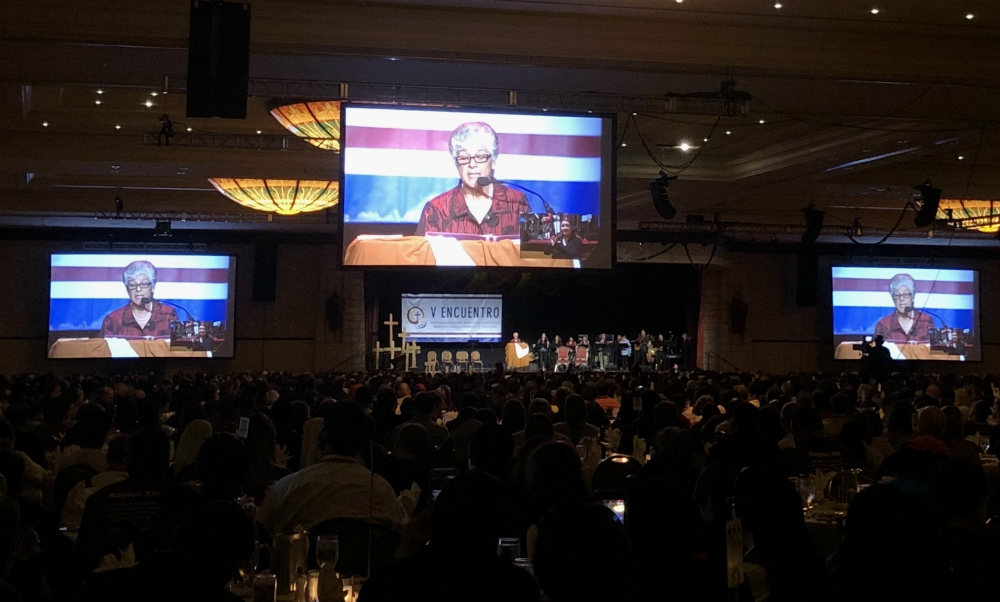 She reviewed the accomplishments of each past encuentro, including her experience of II Encuentro in 1977, the first she attended, as a "time of grace," where Hispanics "realized how together we could shape our existing realities and that of our future."

Today, she said, we "commit ourselves anew as a Hispanic community to the important work ahead."

As a delegate from the Diocese of Saginaw, Michigan, Maria Rivera, a second-generation Mexican-American, said that she is looking for ways "to better evangelize my community, to help not just the Hispanic community but all the Catholics in the U.S., starting with my diocese."

She said a main challenge is engaging people so that their relationship with the church "is not just for the sacraments," but a deeper connection to God.

Rivera said she particularly liked the message from Archbishop Gustavo García-Siller, which she said was "very awakening for the hard times we're going through as a church."

The San Antonio archbishop, who led a welcoming prayer following Pineda's address, told the roomful of delegates, "You are right to be heartbroken by the faults of your shepherds." 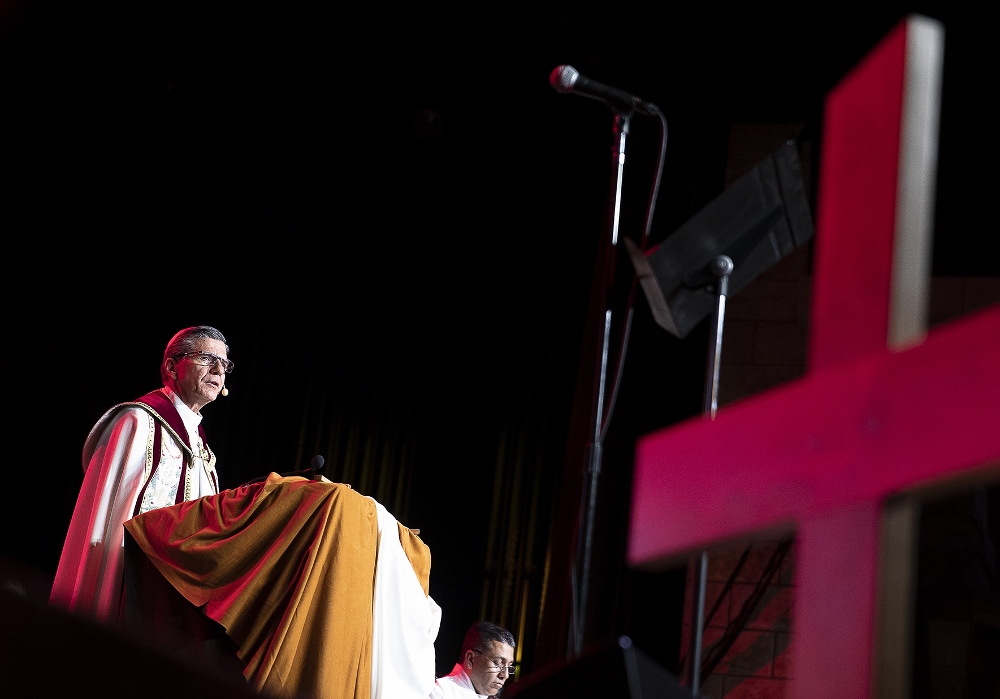 "Let us pray to God for the victims of the crimes that led to this crisis. Do everything you can for the healing of all victims of these abuses, and pray also for the perpetrators and for us, your shepherds," García-Siller said.

Galveston-Houston Cardinal Daniel DiNardo, president of the U.S. Conference of Catholic Bishops, also addressed the sex abuse crisis in his opening remarks, asking for forgiveness and committing to stronger protections. DiNardo called the encuentro a light amid the darkness of the recent revelations of misconduct by priests and bishops.

Pope Francis made a surprise appearance on the ballroom's many large screens — the highlight of the day for most who spoke with NCR — to offer a blessing to those participating in the V Encuentro, saying he was "overjoyed" to speak with the bishops and delegates participating.

"I see that the V Encuentro is a concrete way for the church in the United States to respond to the challenge of going beyond what is comfortable, business as usual, to become a leaven of communion for all those who seek a future of hope, especially young people and families that live in the peripheries of society," he said.

The process has given migrants who live in fear and uncertainty "a greater sense of community, friendship, support," the pope said.

"It has also been an instrument of grace that led to a conversion of heart for many people, and above all ... a pastoral conversion through the encounter with one another, of course, in the adoration of Jesus Christ."

Paola Briseno, a youth coordinator and a third- and fourth-grade catechist in the Las Vegas Diocese, found Francis' message "very motivational," giving the feeling that "you're not alone. You're in a big community with other people."

In the video, the pope said he is "aware of the contribution that the Hispanic community offers to the life of the nation, and I pray that the V Encuentro continues to contribute to the renewal of society and the ministry of the church in the U.S."

To thunderous applause, the pope closed his message: "Go forward!" 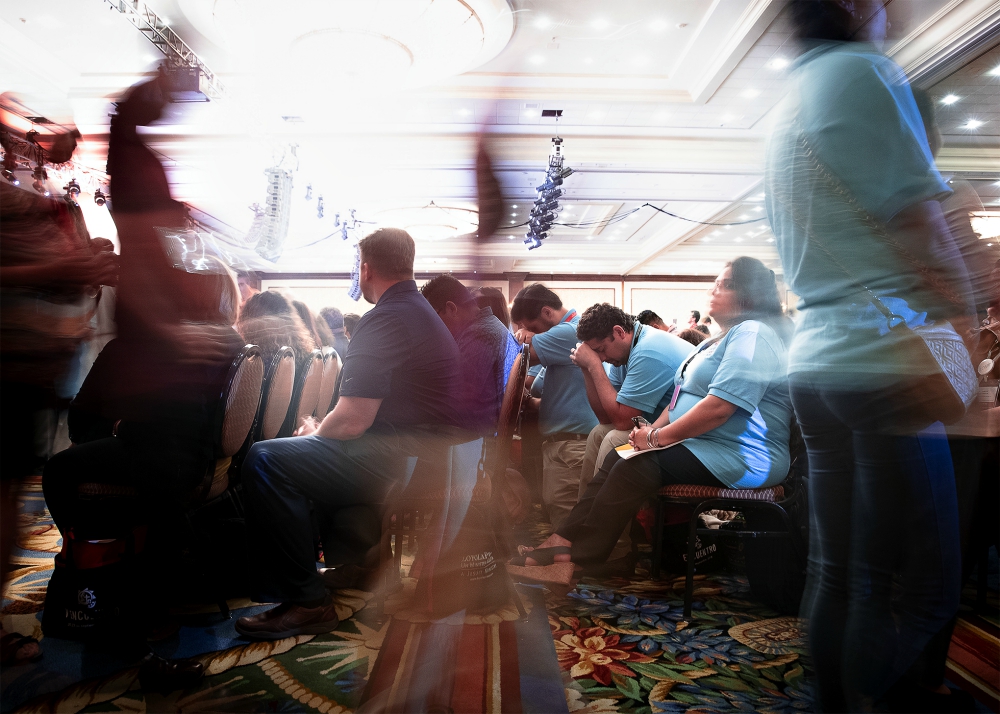 Delegates pray after receiving Communion during Mass Sept. 21 on the feast of St. Matthew during the V Encuentro, in Grapevine, Texas. (CNS/Tyler Orsburn)

For 21-year-old Yesenia Vazquez, who works in youth and young adult ministry in the Diocese of Victoria, Texas, the video was a standout moment in the day, particularly Francis' message on "how we need to be more patient, and that we shouldn't be fearing immigrants who come."

The image of a "community in mission" that guided various addresses resonated with Deacon Santos Jones III, who works in youth and young adult ministry in Corpus Christi, Texas.

"I come from a small community, but it's interesting how in small communities, sometimes parishes create great divides," particularly around race and culture, he said. "But we can put down our barriers to focus on mission."

The evening's last speaker, Archbishop Christophe Pierre, apostolic nuncio to the U.S., alternated between English and Spanish as he quoted extensively from Francis' exhortation Evangelii Gaudium while speaking on the theme of "The Joy of Being Missionary Disciples."

Pierre said the encuentro's purpose was to encounter Christ and other participants, and to help the church encounter the world. "The alternative to building walls is dialogue," he said, when speaking of interacting with those who are frightened of change and of strangers.

The first day concluded with chants that emphasized encuentro themes. "Quien es el pueblo de dios?" ("Who are the people of God?"), the emcees asked, encouraging the crowd to respond "Nosotros!" ("We are!") as if they believed it.

They then led the crowd in accepting Francis' call for missionary discipleship, repeating "Somos una iglesia en salida" ("We are a church that goes forth"), as participants prepared to depart.

Editor's note: Salgado and Benevento will continue to have more reporting from V Encuentro throughout the weekend. Keep an eye on these pages for more.

This story appears in the La Iglesia Hispana feature series. View the full series.
A version of this story appeared in the Oct 5-18, 2018 print issue under the headline: Hispanic young adults engage bishops, express needs at V Encuentro.