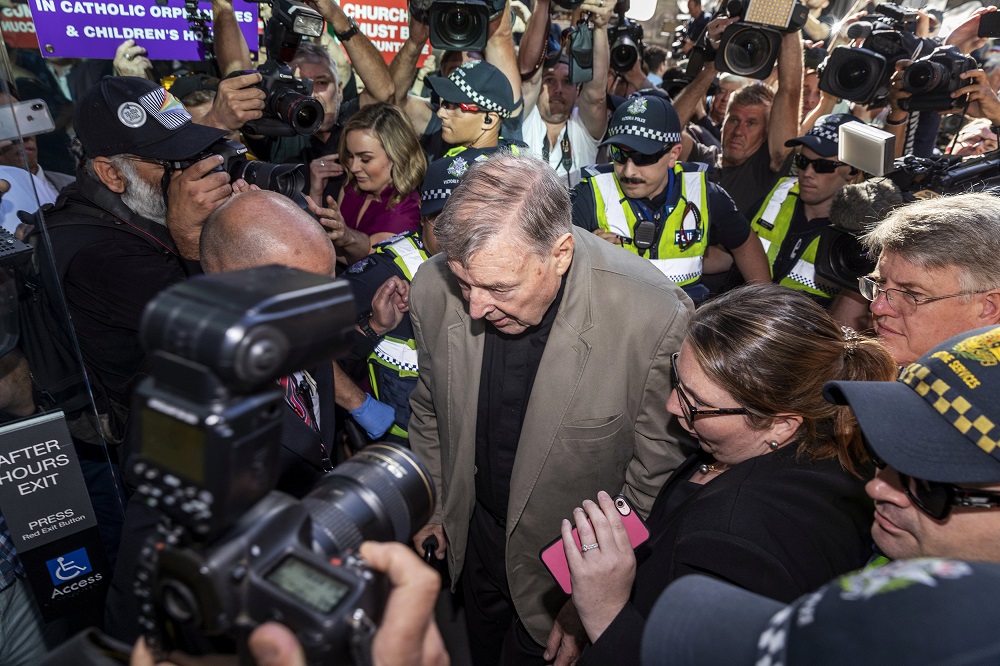 Australian Cardinal George Pell arrives at the County Court in Melbourne Feb. 27, 2019. Pell was jailed after being found guilty of child sexual abuse; the Vatican announced his case would be investigated by the Congregation for the Doctrine of the Faith. (CNS/Daniel Pockett, AAP images via Reuters)

The day Australian Cardinal George Pell was jailed in Melbourne after being found guilty of child sexual abuse, the Vatican announced his case would be investigated by the Congregation for the Doctrine of the Faith.

Related: Update: Cardinal Pell convicted on five counts; verdict will be appealed
"After the guilty verdict in the first instance concerning Cardinal Pell, the Congregation for the Doctrine of the Faith will now handle the case following the procedure and within the time established by canonical norm," Alessandro Gisotti, interim director of the Vatican press office, said Feb. 27.
A court in Melbourne ordered that Pell be taken into custody Feb. 27; he is scheduled to be sentenced March 13 on five charges related to the sexual abuse of two 13-year-old boys in the late 1990s when he was archbishop of Melbourne. The cardinal continues to affirm his innocence and plans to appeal the verdict.
Pell, a former archbishop of Sydney, took a leave of absence in mid-2017 from his position as prefect of the Vatican Secretariat for the Economy. The Vatican confirmed Feb. 26 that the cardinal's five-year term as prefect ended Feb. 24.
The canonical investigation of Pell announced by the Vatican is not the first church investigation of allegations against him; in June 2002, Pell stepped aside as archbishop of Sydney while an independent church review board investigated a claim that he sexually abused a 12-year-old boy at a youth camp in 1961 while a seminarian. The board found insufficient evidence to corroborate the accusations.

When a deacon, priest or bishop is accused of abuse, the first phase of the investigation generally is carried out by the diocese where the abuse is alleged to have occurred. For instance, in the case of Theodore McCarrick, the former cardinal dismissed from the clerical state Feb. 16, the initial investigation was carried out by the Archdiocese of New York, and once the allegations were determined to be credible, the case was handed over to the Congregation for the Doctrine of the Faith.

The Vatican statement Feb. 27 did not mention an archdiocesan inquiry, but apparently that is not necessary in cases where there is a criminal court conviction.

According to information posted by the Vatican in conjunction with the summit Feb. 21-24 on abuse, when the doctrinal congregation opens a process, two modes of proceeding are possible: either with a trial or with a shorter administrative process. In both cases, the accused has the right and opportunity to know the evidence against him and to respond.

If found guilty, the penalties can vary depending on the seriousness of the crime and, often, the age of the accused; possible penalties include removal from office, restricted ministry, "a life of prayer and penance" without any public ministry and dismissal from the clerical state.