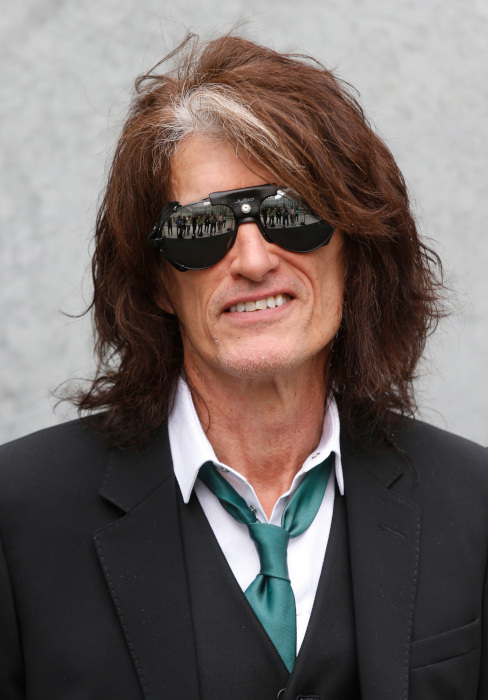 US guitarist Joe Perry attends the Emporio Armani men's Spring-Summer 2015 show, part of the Milan Fashion Week, unveiled in Milan, Italy, Monday, June 23, 2014. Perry is participating along with Dr. Anthony Fauci, soprano Renee Fleming, the CEO's of Moderna and Pfizer among others in a unique three-day Vatican conference starting Thursday, May 6, 2021, on COVID-19, other global health threats and how science, solidarity and spirituality can address them. (AP Photo/Luca Bruno) 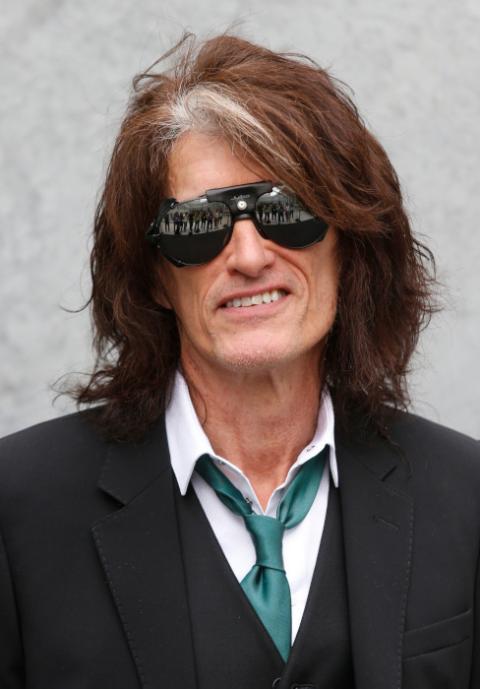 US guitarist Joe Perry attends the Emporio Armani men's Spring-Summer 2015 show, part of the Milan Fashion Week, unveiled in Milan, Italy, Monday, June 23, 2014. Perry is participating along with Dr. Anthony Fauci, soprano Renee Fleming, the CEO's of Moderna and Pfizer among others in a unique three-day Vatican conference starting Thursday, May 6, 2021, on COVID-19, other global health threats and how science, solidarity and spirituality can address them. (AP Photo/Luca Bruno)

The CEOs of vaccine-makers Pfizer and Moderna joined cardinals, academics and the lead guitarist of Aerosmith in opening a unique Vatican conference on COVID-19, other global health threats and how science, solidarity and spirituality can address them.

The three-day online conference, which began May 6 and ends May 8 with a virtual audience with Pope Francis, was planned well before the pandemic erupted last year.

Organizers said the event has only taken on more relevance amid a growing appreciation of the need for global access to health care, new advances in vaccine technology and greater understanding of the mental health cost of loneliness.

Dr. Anthony Fauci, the immunologist who leads the U.S. pandemic response, opened the meeting by saying the pandemic had confirmed to him that faith and science are constantly evolving — and that scientists in particular must humbly admit they don't have all the answers all the time.

One answer the director of the U.S. National Institute of Allergy and Infectious Diseases said he did have was that the key to overcoming current vaccine hesitancy is pairing the right medical message with the right messenger.

"You have someone who's a deeply religious person who will listen to their clergy. That's different than me with a suit going into an area telling people to do something," he said.

Fauci was referring to the religiously inspired resistance to taking COVID-19 vaccines that were indirectly developed using lines of cells derived from aborted fetuses. The Vatican has declared that all COVID-19 vaccines are not only morally licit, but that people have a moral responsibility to get the jabs to protect others.

The multidisciplinary conference was originally scheduled to take place at the Vatican in May 2020 but was postponed a year and eventually put online due to the pandemic.

The virtual format, however, has allowed for an even greater variety of participants.

A Harvard neuroscientist is leading a conversation about brain health and rock stars with Aerosmith guitarist Joe Perry. Soprano Rene Fleming is participating in a panel discussion on the role of music in treating cardiac patients. Supermodel Cindy Crawford has a slot to talk about "beauty from the inside out," and Chelsea Clinton is teaming up with an Italian public health official to promote equal access to health care.

Pfizer chief executive Albert Bourla told the conference in recorded remarks that the race to produce a COVID-19 vaccine had created unprecedented examples of collaboration and efficiency. He recalled that Pfizer didn't have a final commercial agreement signed with its development partner, German firm BioNTech, until January - after Pfizer-BioNTech jabs were already going into arms.

Bourla recalled he and BioNTech's chief executive, Dr. Ugur Sahin, did a virtual handshake "through the Zoom camera" and got to work.

Moderna CEO Stephane Bancel, for his part, said the Trump administration's vaccine development drive, dubbed Operation Warp Speed, allowed Moderna to not only clear regulatory hurdles faster than usual but to take business risks it normally wouldn't have because it had government funding.

The fact that mRNA vaccines have now been approved for use by federal regulators will only spur more development in the new technology, Bancel said.

"Today, we know that we can get an mRNA vaccine authorized by the regulator. And in business, [the difference] between believing and knowing is a huge difference in your willingness to take the risk," he said.

The conference, which featured prominent U.S. journalists as moderators and academics in a variety of fields, also had a religious component. Rabbis, cardinals, imams and representatives of Christian denominations are discussing the role of religion and spirituality in health.

It's the fifth time the Vatican's culture ministry has teamed up with the Cura Foundation to mount a conference that aims to pair advances in science and technology with ideas about how to deliver them effectively, efficiently and at a lower cost.

"People are very focused on the pandemic. It's changed our lives in many, many ways. But there are also other areas of our health that are impacted," said Dr. Robin Smith, the Cura Foundation's founder and president.

The goal of the conference, she said, is to put aside political, religious and ideological differences and focus on improving health care around the globe.

"We really want to sort of check all that at the door and say, 'How can you make a difference? How can we help?'"