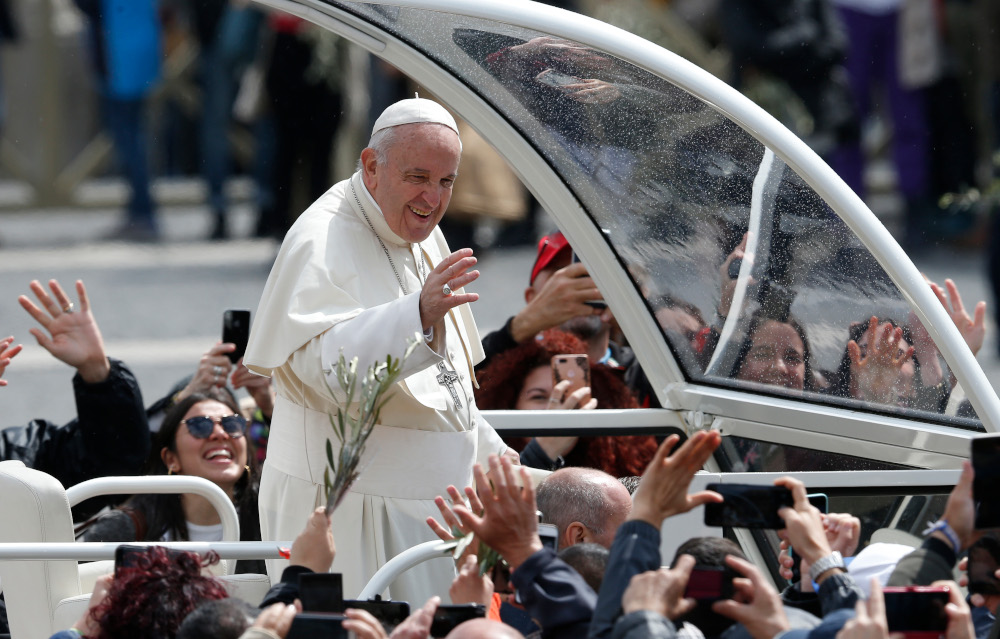 Pope Francis greets the crowd after celebrating Palm Sunday Mass in St. Peter's Square at the Vatican April 14, 2019. This year, the Vatican office that distributes free tickets to papal events has posted a notice on its website that "the liturgical celebrations of Holy Week will take place without the physical presence of the faithful." (CNS/Paul Haring)

The Vatican office that distributes free tickets to papal events has posted a notice on its website that "the liturgical celebrations of Holy Week will take place without the physical presence of the faithful."

While public gatherings, including Masses, have been banned in Italy through April 3, Holy Week begins with the Palm Sunday liturgy April 5, so the notification from the Prefecture of the Papal Household was read as a sign that the ban would be extended, at least at the Vatican.

Matteo Bruni, director of the Vatican press office, told Catholic News Service early March 15 that arrangements for the pope's Holy Week and Easter schedules were "still under study" and that the prefecture's note was meant only to inform people seeking tickets that they would not be distributed as usual.

The prefecture's notice said the decision was made "because of the current global public health emergency" posed by the spread of the coronavirus.

In a formal statement March 15, Bruni said Pope Francis would celebrate all of the Holy Week and Easter liturgies: Palm Sunday, the chrism Mass, the Mass of the Lord's Supper, the liturgy of the Passion of the Lord, the Easter vigil Mass and Easter morning Mass.

However, he said, the Vatican still is studying how those liturgies will take place and with what kind of participation "that respects the security measures in place to avoid the spread of the coronavirus."

The decisions will be communicated, "as soon as they are determined, in line with the evolving epidemiological situation," he said, adding that whatever decisions are made about who can or cannot attend, the liturgies will be transmitted and streamed live.

The Prefecture of the Papal Household posted its notice late March 14, hours after the Italian Ministry of Health released daily figures for the COVID-19 infection, which continues to spread despite the entire country being on lockdown.

As of the evening of March 14, the ministry said, 21,157 people had tested positive for COVID-19; 1,441 people with the virus had died; and 1,966 were considered cured after testing negative twice.