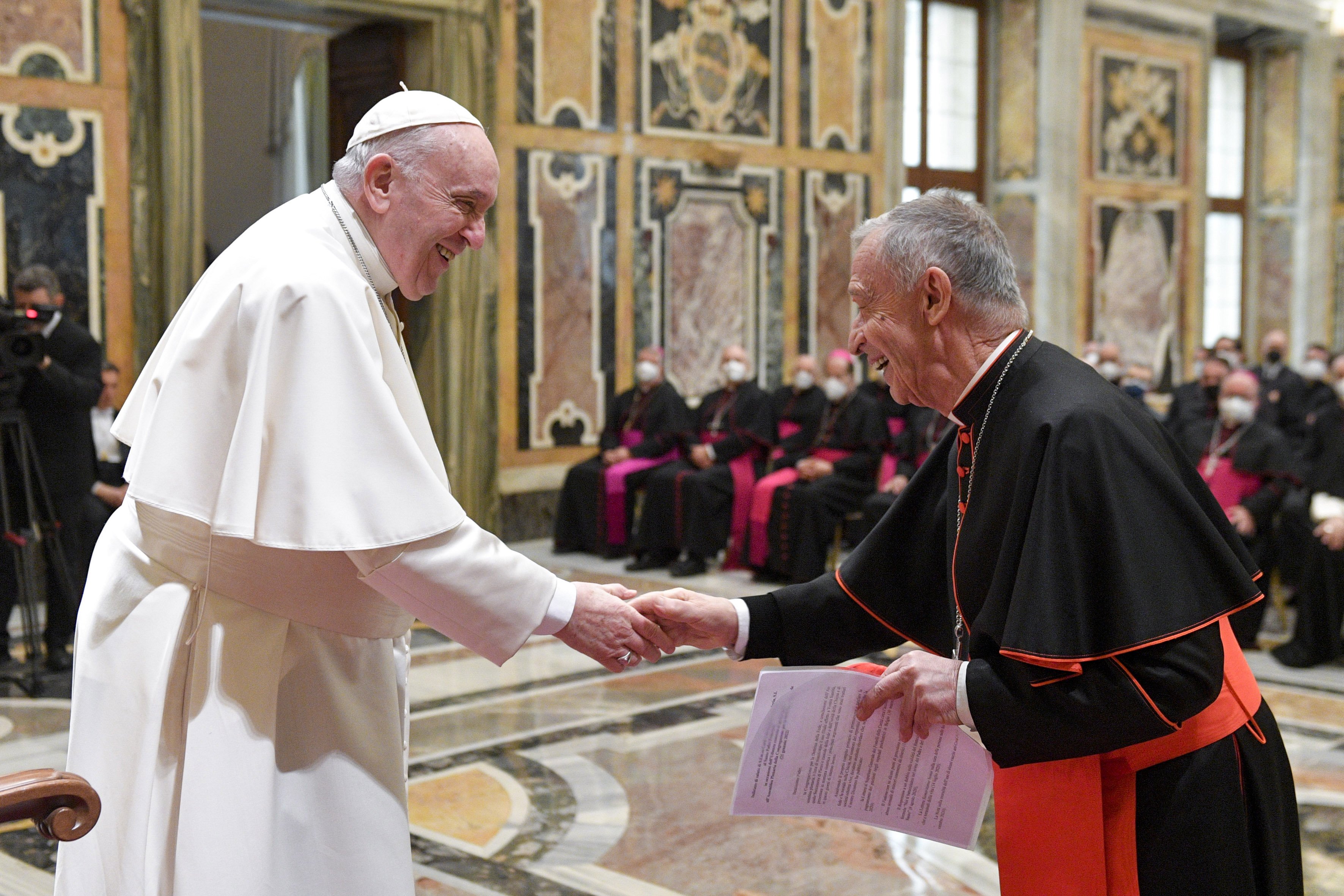 Pope Francis greets Cardinal Luis Ladaria, prefect of the Congregation for the Doctrine of the Faith, during an audience with members of congregation at the Vatican Jan. 21, 2022. (CNS photo/Vatican Media)

ROME — Pope Francis on Feb. 14 overhauled the current structure of the Vatican's doctrinal office, creating an independent section to handle disciplinary matters related to the sexual abuse of minors.

Under its new structure, the office will operate with autonomous doctrinal and discipline sections that will be coordinated by separate secretaries, both of whom will report to the prefect of the congregation.

The new legislation, Fidem servare ("To preserve the faith"), represents the most significant organizational changes to the office in over 30 years.

In announcing the new structure, which comes in advance of a much-anticipated new apostolic constitution that will reorganize the Vatican's central bureaucracy, the Vatican did not announce any personnel changes at the congregation.

The office's current prefect, Cardinal Luis Ladaria, is 77 years-old and has passed the Vatican's traditional retirement age of 75. Last month, Francis reassigned the doctrinal office's secretary, its number two official, to lead Italy's Reggio Emilia-Guastalla Diocese, indicating the pope could soon remake the top leadership of the office in the near future.

According to the Feb. 14 document, the doctrinal section will manage matters related to the "promotion and protection" of issues of faith and morals, along with matrimonial concerns. The document also states that the section will be tasked with certain evangelization priorities and "questions posed by the progress of the sciences and the development of society."

The discipline section of the congregation will manage concerns related to the sexual abuse of minors and other "grave" crimes.

The pope's instructions for the newly revised structure was issued as what's known in church law as a motu proprio ("on one's own initiative") and marks the 46th occasion Francis has issued legislation in such a manner.

Terence McKiernan, president and co-Director of BishopAccountability.org — a website dedicated to documenting the abuse crisis — said in a statement the new changes represent a "long-overdue improvement in the structure of the congregation" that should allow for cases to be more efficiently processed.

"But in order to do this," he noted, "the section’s budget and staff must be increased significantly to clear the backlog of cases and ensure efficient work going forward." He also called for publicly accessible monthly reports on the congregation's "decisions regarding laicizations and prayer and penance determinations."

McKiernan said the reorganized office "must take a more open and responsible approach to the evidence it considers and the decisions it makes."

The Congregation for the Doctrine of the Faith, the oldest and, arguably, most powerful office of the Roman curia, traces its origins to the Roman Inquisition.

Since then, the role of the 16th century office has expanded from its original responsibility of defending church doctrine to now include overseeing matters related to marriage and judging clergy accused of sexually abusing minors.

In 2001, Pope John Paul II issued Sacramentorum sanctitatis tutela ("The Protection of the Sanctity of the Sacraments''), a motu proprio tasking the congregation with handling cases of the abuse of minors. In 2010, Pope Benedict XVI reaffirmed and updated those norms.

At a conference in 2019, Msgr. John Kennedy, who oversees the congregation's disciplinary activities, discussed the uptick of disciplinary cases, which at the time he said was managed by a staff of 17 members. At the time, he likened the experience to working in an emergency room or trauma center.

In January, the pope met with members of and advisers to the congregation, where he said the church "is resolutely pursuing the commitment to render justice to the victims of abuse."

"Judicial action alone cannot suffice to stem the phenomenon," he told them, "but it is a necessary step toward reestablishing justice, repairing the scandal and reforming the offender."

Editor's Note: This story was updated after initial publication to include reaction from BishopAccountability.org.

A version of this story appeared in the March 4-17, 2022 print issue under the headline: Francis creates Vatican department to handle abuse cases.