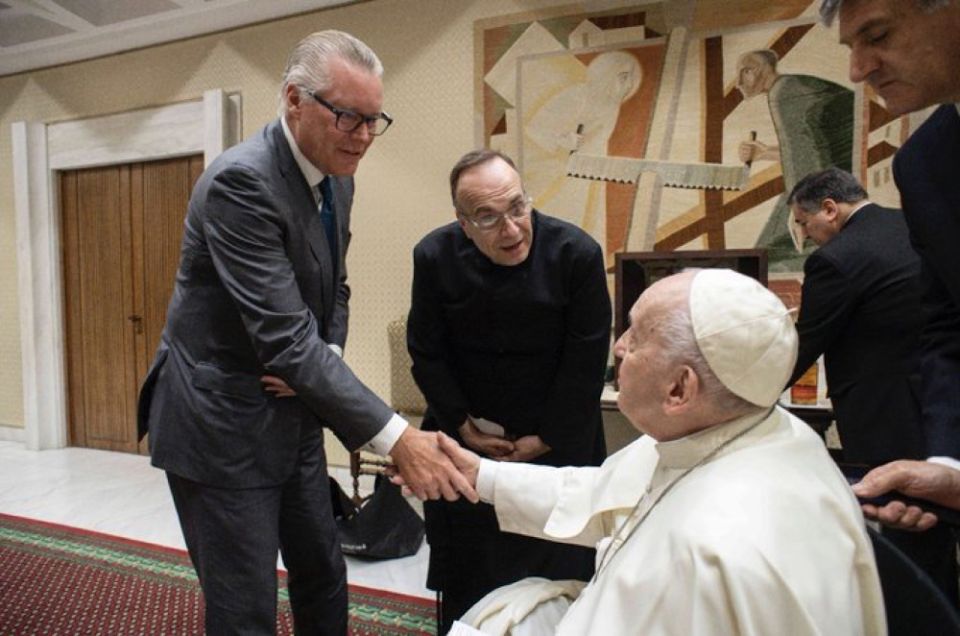 Delta Airlines CEO Ed Bastian and Fr. Jim Sichko of the Diocese of Lexington, Kentucky, meet with Pope Francis on May 18 at the Vatican. (Photo courtesy of Fr. Jim Sichko)

Rome — When Delta Air Lines CEO Ed Bastian addressed a crowd of 50,000 at the University of Georgia's commencement ceremonies on May 13, he concluded his remarks with words from the Prayer of St. Francis of Assisi. Five days later, in Rome, he met the man who had taken on the saint's namesake when he was elected pope in 2013.

Bastian, who has been the head of one of the world's top airlines since 2016, described his May 18 meeting with Pope Francis as a career highlight and one in which he wanted to personally thank the pope for being a messenger of mercy for a world in need of it.

In fact, it was another personal encounter with the works of mercy that led Bastian to meet Fr. Jim Sichko of the Diocese of Lexington, Kentucky, who eventually introduced him to the pope.

Sichko — who is a frequent flier, traveling the world as a motivational speaker and retreat leader — had long been a Delta loyalist and was well known by the company's crew for always bringing along candy, gift cards and other surprises and getting to know their names, families and personal stories.

His care for Delta's employees caught the attention of Bastian who invited him to visit together at the company's headquarters during one of his flight layovers in Atlanta in May 2021.

At the end of their meeting, Sichko had three requests: First, the flight crew at the Lexington airport had asked him to send word to Bastian that they were in need of a new deicing truck (Sichko recalls Bastian made a phone call right then and there). Second, Sichko wanted Bastian to try his mother's homemade spaghetti sauce, which he bottles and sells for charity (Bastian agreed and was sent a shipment). Thirdly, Sichko wanted to tell Bastian about Francis' "missionaries of mercy."

Established by Francis in 2015 for the "Year of Mercy," the Missionaries of Mercy are a special group of priests from around the world with an aim to spread mercy, forgiveness and reconciliation.

"Each missionary has our own type of charism," Sichko told NCR, who described his own focus as "showing mercy through real experiences" that translate into "theological realities."

And after telling Bastian about this special initiative, he had an ask: "I'd like to say that Delta Air Lines is the official carrier of the Missionaries of Mercy."

Bastian agreed — and then insisted that the company would pick up the tab for roughly 100 United States-based Missionaries of Mercy for their next roundtrip flights over to Rome to meet with Francis at the Vatican.

Sichko, who is one of the organizers of the U.S. missionaries' group, initially — and adamantly — declined the offer and insisted that was not the reason for the meeting, but Bastian said it was a settled matter.

"I saw him as someone that is already touching our people, and I wanted to help him propel his message on a much broader platform," Bastian said. 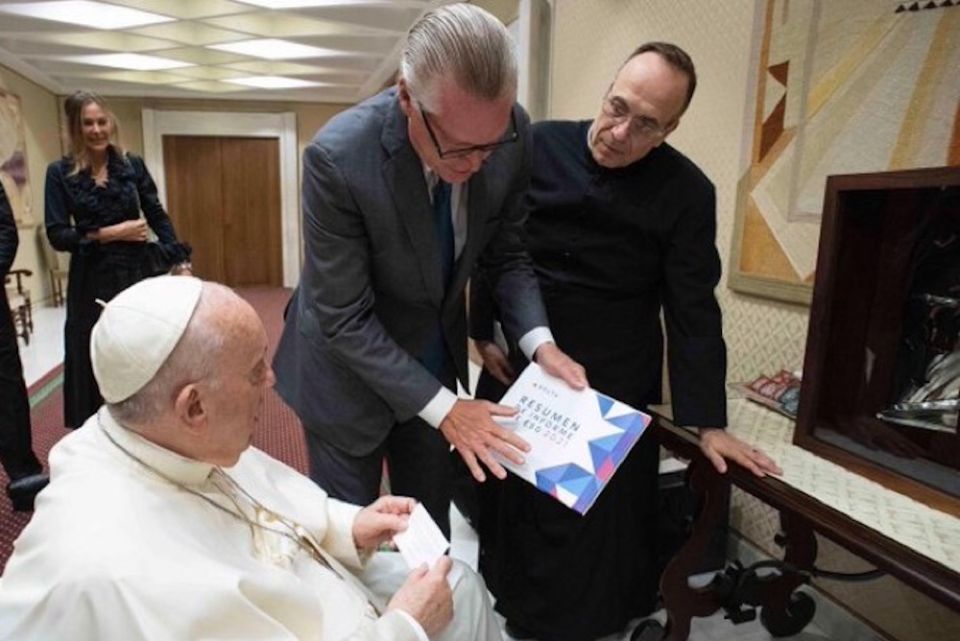 Delta Airlines CEO Ed Bastian and Fr. Jim Sichko of the Diocese of Lexington, Kentucky, meet with Pope Francis on May 18 at the Vatican. (Photo courtesy of Fr. Jim Sichko)

Over his nearly decade-long papacy, Francis has met with the heads of a range of corporations from various countries, among them Apple, Google, IBM and Instagram. The Vatican is careful to make sure these meetings are not viewed as an endorsement of a particular company, but instead an occasion to emphasize social responsibility and working for the common good.

Bastian, who was educated in Catholic schools as a child and then graduated from the Franciscan-run St. Bonaventure University in New York, said that in both Sickho and Francis he sees the virtue of service towards others.

"We live in a world that's challenged. We have a lot of divisions and COVID-19 added to the isolation, the fear and the angst," Bastian told NCR after his meeting with Francis. In encountering Francis, he said he saw the opposite of that, someone whom he described as "trying to reach the world through a message of humility, mercy, forgiveness and grace."

"He's an inspiration," Bastian added, "and someone you want to lift up."

During their time together, Bastian presented Francis with a cross cut out of a Delta aircraft engine blade, a copy of the company's most recent sustainability report translated into Spanish and a note that 100 trees had been planted in Francis' name, along with a check with $100,000 for papal charities.

"We have different congregations," said Bastian, who remarked that he leads a company of nearly 80,000 personnel, while Francis leads a church of 1.3 billion Catholics.

Both constituencies, he said, stand to benefit from the words of scripture, repeated by St. Francis of Assisi: "give and you will receive."

It's that spirit that brought Sichko and Bastian together in the Atlanta airport, and eventually brought them to Rome to a man Bastian says embodies a "life of service."

In meeting Francis, he said it's a "reminder to pay attention to those around us."

"And with everything going on around us," he continued, "it's all about service."

The church is more than just the pope