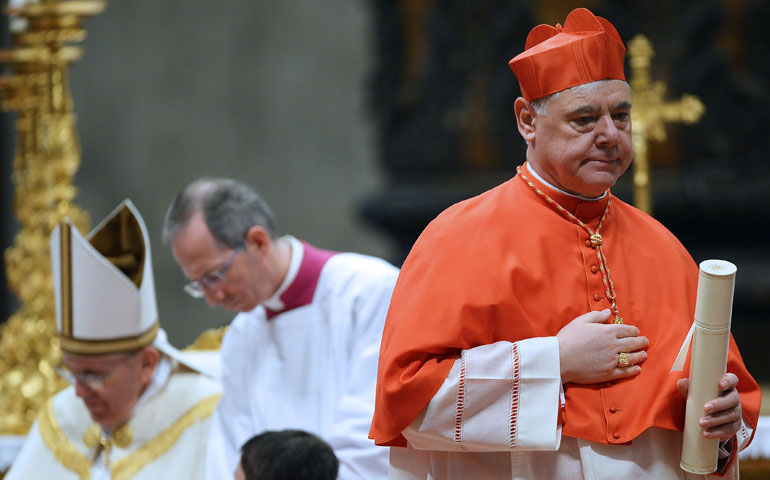 With Pope Francis at left, Cardinal Gerhard Müller, right, is seen at the consistory in which he was made a cardinal in St. Peter's Basilica at the Vatican Feb. 22. (AFP/Getty Images/Vincenzo Pinto)

Cardinal Gerhard Müller enjoys recounting a humorous episode that occurred some months ago when Pope Francis stopped into the office Müller heads, the Congregation for the Doctrine of the Faith.

The pope immediately noted a small statue in the entrance hall, which depicts a bishop in full regalia sitting on a horse and holding aloft the Blessed Sacrament in a gold monstrance.

"I sat in a saddle like that for six hours," Müller told the pope, alluding to the 600-year-old annual Pentecost Ride he sometimes led when he was bishop in Bavaria. With a chuckle, Francis replied: "The poor horse!"

Unfortunately, there's also a dark side to this lighthearted humor. Horses aren't the only ones that have had to bear the heavy weight of the 66-year-old Müller. Most recently, he came down hard on the Leadership Conference of Women Religious, the largest and oldest of the two associations of nuns in the United States, during a meeting with its leaders April 30 in Rome. But many and varied are the Catholic clerics (even a few cardinals), religious and laity who have gotten pressure from this Joseph Ratzinger protégé in the little less than two years he has been in charge of what was once called the Holy Office.

They include those who (citing Francis) evoke the principle of mercy as justification for readmitting divorced and civilly remarried Catholics to the church's sacraments. Among their number are also those who (again, quoting the Argentine pope) have argued that national and regional episcopal conferences should be allowed to exercise greater decision-making and even doctrinal authority. And just recently it was reported that Müller's office has opened an investigation into the theological writings of Fr. Michael Amaladoss, the prominent Indian Jesuit who specializes in inculturation and interreligious dialogue.

The issues that the above-mentioned individuals and groups espouse might rightly be called "reform-minded," "creative" and, in some cases, "progressive." But even a few of those that unabashedly identify themselves as "conservative" or "traditionalist" have also felt the Vatican's doctrinal chief breathing down their neck. Notable is the schismatic Society of St. Pius X, commonly known as Lefebvrists or Lefebvrites, as well as the Opus Dei head of the church in Peru, Cardinal Juan Luis Cipriani of Lima. The former's major crime is disobedience to the papacy, and the latter's, apparently, is an intense dislike for Fr. Gustavo Gutiérrez, a Peruvian friend of Müller's who is considered the father of liberation theology.

This is all very perplexing to so-called "Vatican II Catholics" who have been heartened by Francis' willingness to reopen discussion on thorny issues inside the church, his stated desire to decentralize power, and his call for all believers to risk making mistakes in their efforts to reinvigorate the church by leaving the sanctuary and going out to the peripheries of humanity.

Müller's words and actions appear to them as contradictory to this new style of openness and audaciousness. They rightly want to know if the pope is merely tolerating the cardinal's contrasting views or, more worrying, if he is actually (and secretly?) approving them. And if so, why? If the answer is neither, then why did he ever reconfirm the German as Congregation for the Doctrine of the Faith prefect in the first place and then make him a cardinal?

The fact is, like that "poor horse," Francis was saddled with him.

Müller was nearing the end of his 10th year as bishop of Regensburg, Germany, in July 2012 when Pope Benedict XVI called him to Rome to head the doctrinal office. About seven months later, Benedict, who himself had spent a quarter of a century as prefect of doctrinal congregation, announced he was resigning the papacy.

Then-Archbishop Müller had not yet completed his first year at the former Holy Office in March 2013 when Francis was elected bishop of Rome. If the new pope had replaced him (by the way, he's also the chief editor of the complete theological works of Benedict XVI/Joseph Ratzinger), it would have been seen as a serious criticism of the retired pope's judgment and wisdom. That would have immediately unleashed fierce opposition (which only later became manifest) to Francis' efforts to reform the Roman Curia and the church's governing structures.

So what to do about the prefect of a major Curia office who does not seem to be "on message"? Jesuit Fr. Thomas Reese hinted at the solution in a recent article, "The Vatican's doctrinal congregation isn't so supreme anymore" (NCR, March 14-27). He noted that at least three of Francis' closest aides have been openly critical of the doctrinal congregation prefect and the positions he's taken on certain issues.

First, Cardinal Oscar Rodríguez Maradiaga of Tegucigalpa, Honduras, the coordinator of the pope's advisory body of eight cardinals, accused Muller of being too rigid. He told a German newspaper the doctrinal czar should be "more flexible" and "listen to other voices."

Cardinal Reinhard Marx of Munich, another Council of Cardinals member and head of the Council for the Economy, publicly rebuked his fellow German for trying to clamp down on any new ideas to provide the sacraments to divorced and remarried Catholics. "He cannot stop discussions," Marx said.

And Cardinal João Bráz de Aviz, head of the Vatican congregation for religious orders, openly lamented the doctrinal congregation's lack of consultation with his office over the doctrinal assessment and planned reform of LCWR.

There are a number of others as well. Most prominent are Cardinals Walter Kasper and Lorenzo Baldisseri. Kasper, the retired head of the Vatican's ecumenical office and the de facto "theologian of the pontificate", said Muller's office tends to take a "narrow" view. Baldisseri, secretary general of the Synod of Bishops, has spoken in direct contrast to the doctrinal prefect, saying the church's teaching on family and marriage can and must be "updated."

Reese also noted Francis' advice to religious orders not to worry too much about corrections and warnings they receive from the Congregation for the Doctrine of the Faith. The Jesuit author then cited his pope-confrere's address to doctrinal congregation officials, saying their work should be "distinguished for the practices of collegiality and dialogue."

And this is really where la Suprema, as the doctrinal office was once known, isn't so supreme anymore. The locus for the exercise of episcopal collegiality, at least in Rome, is the Synod of Bishops, certainly not the Congregation for the Doctrine of the Faith. Francis, like no pope before him, has personally attended several planning sessions at the synod secretariat's headquarters. He's expanded the physical space of the office, made the undersecretary a bishop (never done before) and has called for major changes in the procedures used at synod assemblies.

Although it is commonly referred to as (and is de facto) part of the Roman Curia, the synod is actually (and de jure) separate and above the Curia. The Jesuit pope is determined to change that, in order to make it a constituent part of effective governing structure for the universal church. In this model, bureaus in the Curia -- including the old Holy Office -- would be subordinated to and at the service of the synod. And Müller would be just one more bishop among the other bishops.

That's why when Francis announced the names of his first group of new cardinals last January the secretary general of the Synod of Bishops was second on the list, just behind his Secretary of State. The Congregation for the Doctrine of the Faith prefect came third.

All you poor workhorses in the mission fields of the Lord, take heart!

[Robert Mickens is a freelance writer living in Rome since 1986 and is a longtime observer of the Vatican scene.]

A version of this story appeared in the June 6-19, 2014 print issue under the headline: The Benedict protégé in Francis' Vatican.