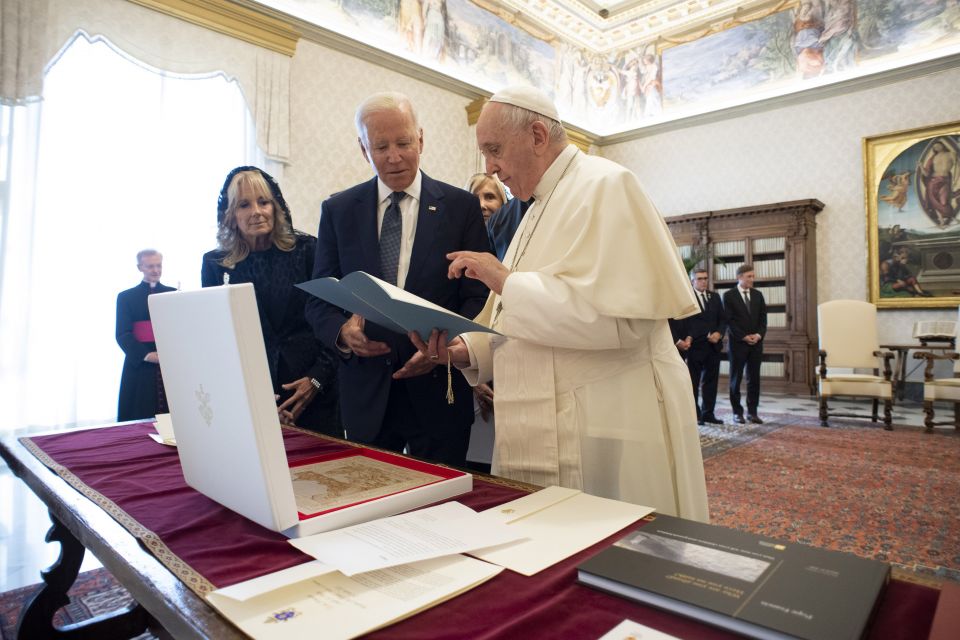 ROME — U.S. President Joe Biden joined Pope Francis and Sheik Ahmed el-Tayeb, the grand imam of al-Azhar, in marking the International Day of Human Fraternity on Feb. 4, stating that faith demands respect for the dignity of every human person.

“From the ongoing threat of the COVID-19 pandemic and the existential climate crisis to the rise of violence around the world, these challenges require global cooperation from people of all backgrounds, cultures, faiths and beliefs," said Biden in a statement. "They require us to speak with one another in open dialogue to promote tolerance, inclusion and understanding.”

“In my life, faith has always been a beacon of hope and a calling to purpose even during the darkest of days," he continued. "Sacred teachings across faith traditions command that we love one another, serve and protect the most vulnerable and uphold the dignity of every person, which is what the International Day of Human Fraternity is all about.”

The International Day of Human Fraternity was established to commemorate the anniversary of Francis' 2019 visit to Abu Dhabi, where the pope and the grand imam signed a landmark document on "Human Fraternity for World Peace and Living Together."

The document insists on the basic human right to freedom of religion, denounces terrorism and calls on world leaders to work together towards peace. When Biden visited Pope Francis at the Vatican last October, he was given a copy of the document, as one of the customary gifts the pope gives to world leaders.

“On this day, we affirm — in words and in actions — the inherent humanity that unites us all,"  Biden said in his statement on Feb 4. "Together, we have a real opportunity to build a better world that upholds universal human rights, lifts every human being, and advances peace and security for all."

In his own video marking the occasion, Francis said that "We all live under the same heaven, independently of where and how we live, the color of our skin, religion, social group, sex, age, economic conditions or our state of health."

"All of us are different yet equal, and this time of pandemic has shown that clearly. Let me say once again: we are not saved alone!" the pope said. 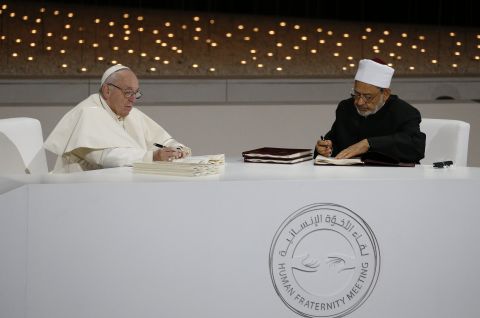 Pope Francis and Sheikh Ahmad el-Tayeb, grand imam of Egypt's al-Azhar mosque and university, sign documents during an interreligious meeting at the Founder's Memorial in Abu Dhabi, United Arab Emirates, in this Feb. 4, 2019, file photo. The document was on "human fraternity" and improving Christian-Muslim relations. The Vatican announced that Pope Francis will participate in a virtual meeting Feb. 4 to mark the first celebration of the International Day of Human Fraternity. (CNS photo/Paul Haring)

The pope's video was shared at the Human Fraternity and the Global Tolerance Alliance Roundtable in the United Arab Emirates on Feb. 4.

Francis' outreach to the Muslim world has been a consistent theme throughout his nearly nine-year papacy. During his 2019 visit to Abu Dhabi, he became the first pope to celebrate Mass in the Arabian Peninsula, the birthplace of Islam, and his March 2021 visit to Iraq marked the first time a pope had ever traveled to the Shia Muslim-majority country.

"We all live under the same heaven. Now is the fitting time to journey together, believers and all people of good will," the pope said during his 2022 Human Fraternity video message. "Do not leave it to tomorrow or an uncertain future."

"The path of fraternity is long and challenging," he said. "It is a difficult path, yet it is the anchor of salvation for humanity."

Pope calls not having kids a 'selfish choice'