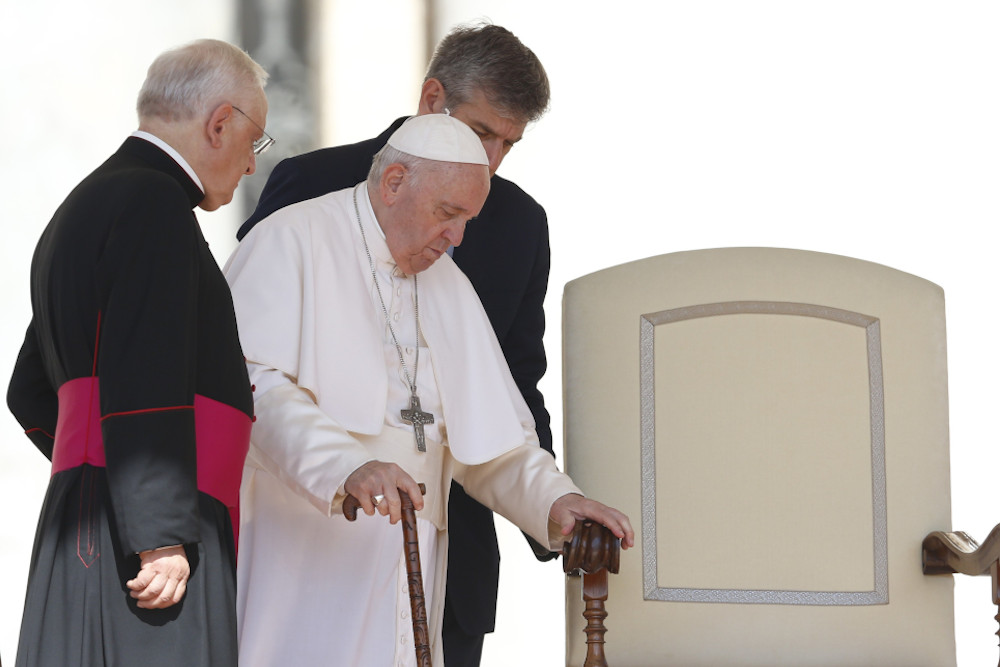 Pope Francis arrives at his chair during his general audience in St. Peter's Square at the Vatican June 8. (CNS/Paul Haring)

In an interview published June 8, Cardinal Óscar Andrés Rodríguez Maradiaga dismissed rumors circulating in the media that the pope might resign as nothing more than "a cheap soap opera."

According to Maradiaga, who advises the pope within the Council of Cardinals, news reports suggesting Pope Francis' physical decline will soon lead to a new conclave are "fake news" perpetrated by outlets located primarily in the United States, where, he added, the pope notoriously faces "strong opposition."

Numerous articles published recently in major news outlets have attempted to draw conclusions from a conflagration of scheduled events in August, namely a council of cardinals, new cardinal appointments and a visit to the basilica where Pope Celestine V, known for resigning from the pontificate in 1294, is buried.

On Aug. 27, cardinals from all over the world will convene at the Vatican for a ceremony where Pope Francis will make 21 new cardinals and they will discuss the new apostolic constitution, Praedicate Evangelium, or "Preach the Gospel."

Such cardinal summits, or consistories, are rarely held in August, and Vatican insiders had predicted the event would take place in September. The earlier date is fueling speculation that Francis may be in a hurry to cement his legacy. The choice to appoint cardinals — which the pope had done with consistent frequency until the pandemic — has also been interpreted as a sign that he is paving the way toward his successor.

Maradiaga said that instead, the consistory "is proof that the pope is moving forward, he is not going to resign, nor is he sick." The summit of cardinals will be an opportunity to address "Francis' great reform," the cardinal said, adding the pope "is perfectly fine" despite his knee pain and "will continue to govern the church."

The pope's physical health has seen a decline ever since he was brought to the Roman hospital Gemelli for a "programmed intervention" in the removal of one side of his colon in July 2021. Since then, Francis' longtime struggles with sciatica and knee pain have worsened, leading him to cancel events that put a strain on his legs and eventually forcing him to use a wheelchair. 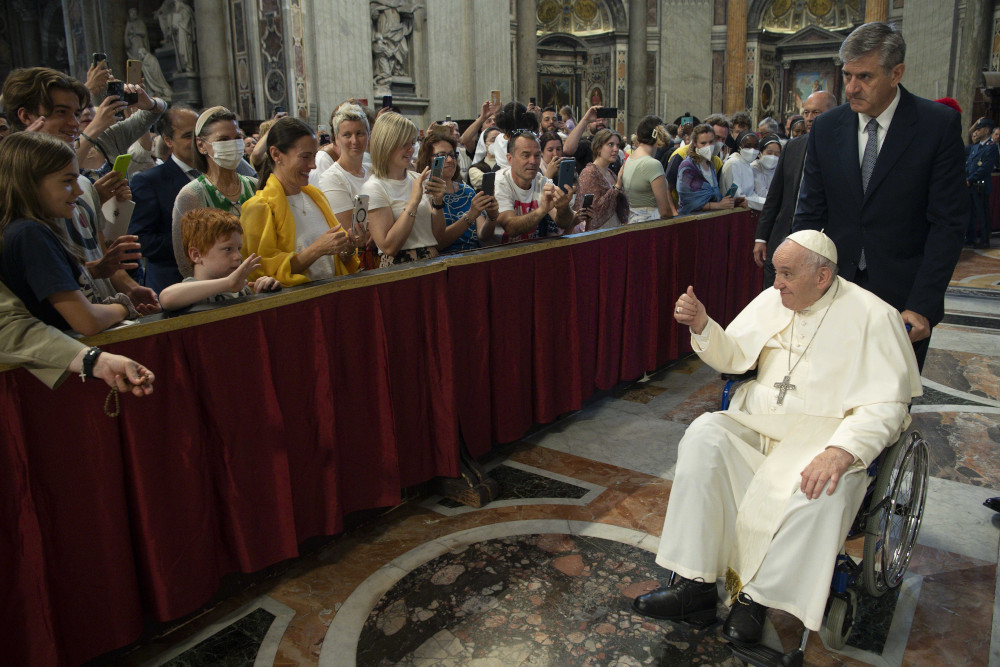 Pope Francis greets people after participating in Mass for the feast of Pentecost in St. Peter's Basilica at the Vatican June 5. The Mass was celebrated by Cardinal Giovanni Battista Re, who has substituted as the main celebrant on a few occasions when the pope has had health problems. (CNS/Vatican Media)

The Vatican has maintained its classic silence concerning the pope's health and has released no statement on his medical situation or assistance. Francis himself has been dismissive of concerns regarding his health, joking with faithful in St. Peter's Square on May 15 that "a bit of tequila" is all his knee really needs.

Despite the pain in his knee, Francis has a heavily packed schedule for July, when he plans to go on two demanding papal trips, one to South Sudan and Congo and another to Canada. The pope will not be hosting general audiences and prayer services in July for the traditional summer break.

Doctors interviewed on numerous Italian media outlets have stated Francis should undergo a rather simple surgery to relieve his knee pain, which is now worsened by arthritis. But speaking to Italian bishops May 23, Francis said, "I'd resign rather than undergo surgery."

What has most fueled conversations about a possible retirement is Francis' decision to visit the Basilica of Collemaggio in the town of Aquila, where Pope Celestine V, who retired from the pontificate after curial opposition, is buried. Some seven centuries later, Pope Benedict XVI visited the holy site in 2009, four years before he would hand in his resignation, and laid his pallium, a liturgical vestment symbolizing papal authority, before the tomb.

The basilica is also considered to be the birthplace of the papal jubilee, since Celestine first instituted the complete pardon of sins for whoever entered the church.

For Maradiaga, reading Francis' visit to the basilica as a sign of his imminent resignation constitutes a "cheap soap opera," and in the interview the cardinal stated that "the trip to Aquila was already planned, planned for a long time."

According to the cardinal, rumors of Francis stepping back from the pontificate are fomented by his critics. In a virtual news conference on June 7, Maradiaga said the pope is faced with a "sit-down strike" by members of the Curia who oppose his reforms, made clear by the fact that the apostolic constitution has not yet been translated into other languages apart from Italian.

"I'd resign rather than undergo surgery."

Benedict XVI has been living inside the Vatican since his resignation, and while keeping a low profile, he has become a symbol for Francis' critics who preferred the traditional bent of the German pontiff. There is no canon law that determines what happens to pontiffs who choose to resign, which might become more frequent as medical improvements stretch the longevity of popes.

Creating a legal framework for the role of the emeritus pope "is not a necessity," said Msgr. Juan Ignacio Arrieta, the secretary for the Pontifical Council for Legislative Texts, while speaking to a handful of reporters, including Religion News Service, on May 24.

"Many are thinking about this," Arrieta admitted, adding that "handling these situations is hard." He said little can be gained from the experience of retiring bishops in dioceses, since even in those cases the transition is rarely smooth. He also said that as the supreme legislator, popes can change laws at will, meaning if a law for emeritus popes were to be made now it doesn't mean that the next pope would not change it or eliminate it.

"We leave all things to people's common sense," Arrieta said.