Cardinal O'Malley: We have a moral and ethical responsibility to report abuse 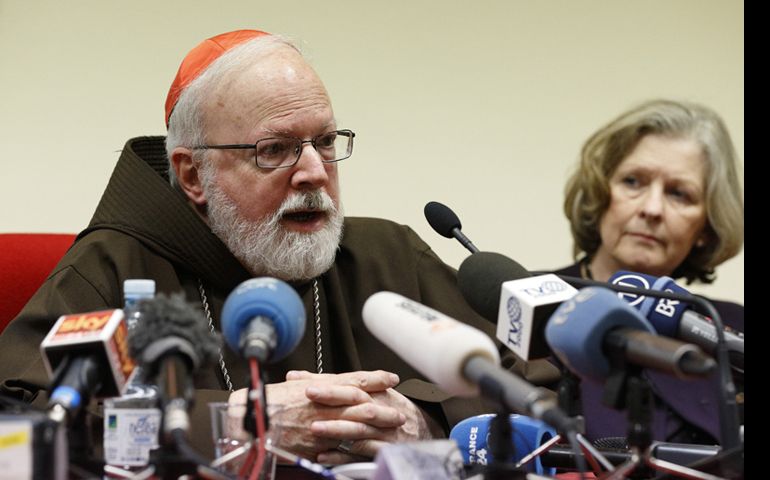 Cardinal Sean P. O’Malley of Boston, head of the Pontifical Commission for the Protection of Minors, speaks at a news conference at the Pontifical Gregorian University in Rome on Feb. 16, 2015. (Paul Haring/CNS)

Vatican City — Catholic clergy have a "moral and ethical responsibility" to report sexual abuse, the cardinal tasked with reforming the Vatican's approach to sexual crimes said after criticism of the Holy See.

Boston Cardinal Sean O'Malley sought to reaffirm the church's position on reporting abuse in his role as head of the Pontifical Commission for the Protection of Minors, which Pope Francis set up in 2014.

"Our obligations under civil law must certainly be followed, but even beyond these civil requirements, we all have a moral and ethical responsibility to report suspected abuse to the civil authorities who are charged with protecting our society," O'Malley said in a statement Feb. 15.

O'Malley's comments followed a report that a French priest told new bishops they were under no duty to report abuse allegations to the police.

O'Malley denied that churchmen were effectively told to ignore abuse.

The pontifical commission has come under renewed scrutiny recently after one of the two victims on the panel was sidelined. Peter Saunders, who was abused as a child in Britain, is taking a "leave of absence," the commission announced.

Saunders disputed the nature of his leave and said only Pope Francis could permanently remove him from the commission.

"A number of members of the commission expressed their concern that I don't toe the line when it comes to keeping my mouth shut," Saunders said on Feb. 6, describing the advisory body as "a public relations exercise."

The second abuse victim on the commission, Marie Collins from Ireland, said she remained committed to the commission's reform goals.

Collins did, however, raise concerns about the reaction of some within the Vatican administration to the pope's commission.

"I feel strongly that anyone criticizing the commission is choosing the wrong target. There are many of good will in the Curia but unfortunately there are still those, at this top level, who worry more about their own fiefdoms and the threat of change than they do about the work the Commission is trying to do to protect children," she told National Catholic Reporter on Feb. 9.

Vatican | Cardinal O'Malley: We have a moral and ethical responsibility to report abuse

Former altar boy on monsignor: 'I have never seen him touch or harm anyone'

Residents near center for troubled priests worry about property values