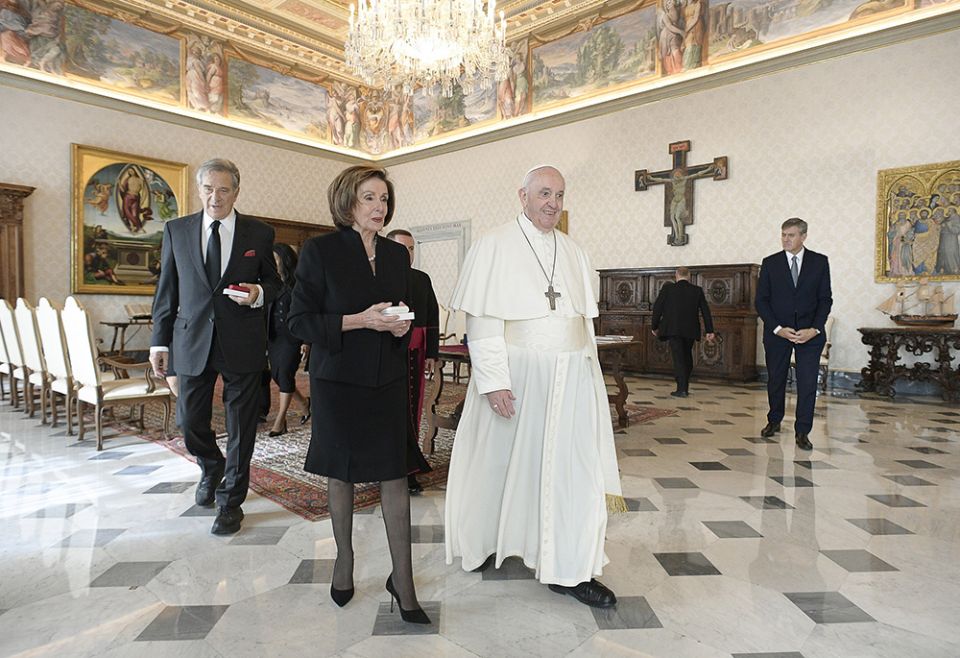 Pope Francis walks with U.S. House Speaker Nancy Pelosi, D-California, accompanied by her husband, Paul, during a private audience Oct. 9, 2021, at the Vatican. Pelosi, on June 29, attended the Vatican's Mass for the Feast of St. Peter and Paul, presided over by Pope Francis. (CNS/Vatican Media)

Rome — Despite a public row back at home with San Francisco's archbishop who has barred her from Communion over her support for abortion rights, House Speaker Nancy Pelosi is currently making the rounds in Rome, where in a 24-hour period, she attended a papal Mass at the Vatican where she received Communion, headlined an event at the U.S. Vatican embassy and visited one of the city's leading Catholic social service organizations.

Pelosi, on June 29, attended the Vatican's Mass for the Feast of St. Peter and Paul, presided over by Pope Francis. According to The Associated Press, witnesses present said the longtime California Democrat received Holy Communion from a priest and met privately with the pope prior to the Mass.

Francis has previously met with Pelosi on several occasions, both in the United States and at the Vatican, including in a private audience last October.

In May, San Francisco Archbishop Salvatore Cordileone publicly announced he was barring Pelosi from Communion unless she publicly repudiates "support for abortion 'rights' " and goes to confession.

The Vatican has repeatedly distanced itself from such an approach, warning against focusing on any particular issue in relation to the "worthiness" to receive the sacrament. In September, Francis told reporters that he had never denied the Eucharist to anyone.

At the same time as Pelosi is in Rome, Cordileone is hosting a major liturgical conference at the Archdiocese of San Francisco's seminary, headlined by some of Pope Francis' most notorious critics.

Following Mass, Pelosi visited with four refugee families — two from Ukraine and two from Afghanistan — at the international Sant'Egidio Community, which has helped the families resettle in Italy.

At the organization's headquarters in the Roman neighborhood of Trastevere, Pelosi reflected on attending Mass with Francis and dozens of Vatican officials and ambassadors.

"In the spirit of St. Francis, which is the name of His Holiness and my city of San Francisco, I thank you for preaching the Gospel, sometimes using words," she told leaders of the Catholic service organization, which is closely aligned with Francis.

Pelosi went on to note that she was shown a painting that morning of St. Egidio, who she remarked was known as a protector of wheat.

"How appropriate right now when wheat is so in jeopardy because of the war in Ukraine," she said. "Maybe St. Egidio will be an inspiration as we solve that problem."

Donnelly, a former U.S. representative and then-senator, said the last time he participated in a public signing ceremony with Pelosi was when President Barack Obama signed the Affordable Care Act legislation in 2010.

"On that day, over 20 million Americans received health care for the first time," he said. "So every time we seem to sign documents together, good things happen."

In April, in one of his first official acts after officially presenting his diplomatic credentials to Francis, Donnelly visited newly arrived Ukrainian refugees at the Community of Sant'Egidio's Refugee Welcome Center.

The previous evening, Pelosi also joined Donnelly to headline a June 28 reception hosted by the U.S. Vatican embassy ahead of Independence Day, in which she praised ​​the Catholic Church as the "greatest institution in the world" for responding to people in need.

'Keep Sweet: Pray and Obey' documents one man's idea of heaven on Earth

Your thoughts on the ecclesial situation in Texas

Like Biden, my Supreme Court justice grandfather was shamed for going to Mass