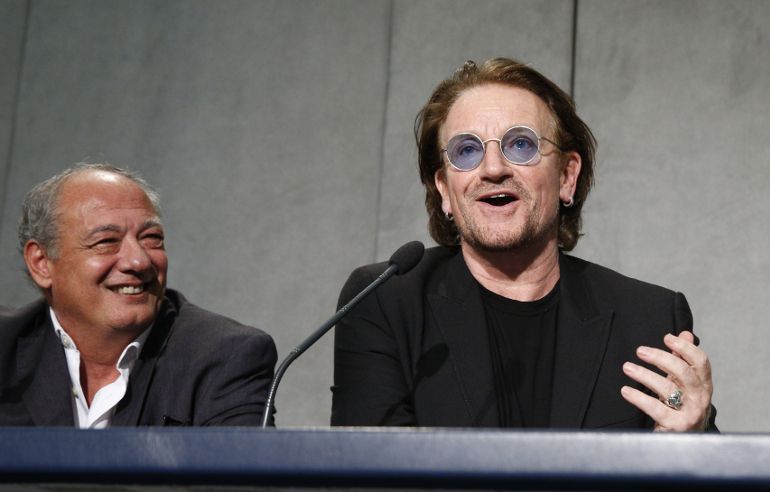 Bono, the lead singer of U2, speaks during a news conference in the Vatican press hall after meeting Pope Francis at the Vatican Sept. 19. Also pictured is Jose Maria del Corral, president of Scholas Occurentes. (CNS photo/Paul Haring)

Vatican City — Irish rock star Bono came to where the streets have saints' names for a surprise meeting with Pope Francis Sept. 19.

Addressing the Vatican press corps afterwards while wearing his trademark tinted glasses, the U2 lead singer said he had spoken with the pontiff about both "the wild beast" of capitalism and the recent spate of revelations of clergy sexual abuse in the Catholic Church.

"We talked about the pope's feelings about what has happened in the church," said Bono, adding that Francis spoke about being "aghast" at the revelations.

"I explained how it looks to some people like the abusers are being more protected than the victims, and you could see the pain in his face," said the singer. "I thought he was sincere."

The singer said that he was "intrigued" by what Scholas was doing and wanted to see about a possible partnership with the international advocacy organization One, which he co-founded in 2004 alongside 11 non-profit humanitarian organizations.

"We haven't figured out what we're going to do together, we just sort of have a crush on each other," Bono said of the pending discussions.

In his only remarks specifically on the matter to date, the pope said Viganò's document, which contains a host of unsubstantiated and ideological claims and has now been revealed to have been drafted with the help of several ultra-right-wing Catholic figures, "speaks for itself."

The Vatican announced Francis' meeting with Bono about 90 minutes before it was set to begin Sept. 19, referring to the singer as "Paul David Hewson (Bono Vox of U2)."

Pope Francis gets a C+ on reforming Vatican Curia