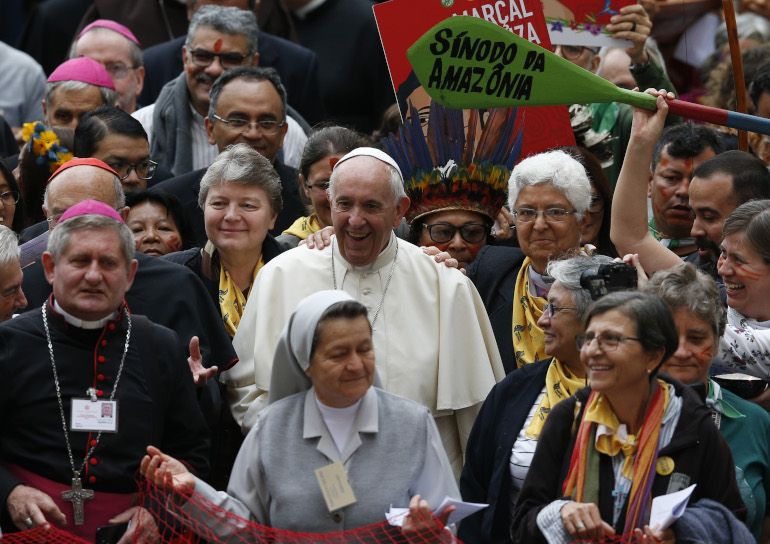 Pope Francis walks in a procession at the start of the first session of the Synod of Bishops for the Amazon at the Vatican Oct. 7, 2019. (CNS photo/Paul Haring)

Vatican City — Openness to new ways of thinking emerged as the primary theme of the Vatican's Synod of Bishops for the Amazon region on its first day of business, with Pope Francis and the cardinals leading the three-week event telling the participating prelates not to be resistant to new ideas.

Clearly enunciated among those new ideas: the possibility of ordaining married men to address the severe lack of Catholic ministers across the nine-nation region, and finding a way for the church to offer women there some kind of official ministerial work.

In fact, retired Brazilian Cardinal Claudio Hummes, who is serving as the synod's lead organizer, suggested that those two possibilities be considered one of six "core issues" of the Oct. 6-27 event.

But Hummes, who gave a 50-minute opening address to the 185 prelates and 80 non-voting experts attending the synod, also spoke much more broadly. He said that the 1.3 billion-member global church could no longer "remain inactive within her own closed circle, focused on herself, [and] surrounded by protective walls."

"The church needs to throw open her doors, knock down the walls surrounding her and build bridges, going out into the world and setting out on the path of history," said Hummes, speaking at a dais in the Vatican's synod hall decorated with images of Latin American martyrs such as Salvadoran Archbishop Oscar Romero.

In an apparent reference to the unprecedented levels of criticism the synod has already received from a vocal minority of conservative Catholics, who are concerned especially about the idea of ordaining married priests on a regional basis, the cardinal continued: "It is in moving forward that makes the church loyal to its true tradition."

Another theme that quickly emerged on the synod's first day: care and protection for the Amazon's indigenous communities. Their inclusion in the event was also markedly apparent from its first moments.

In a break from previous synods, the opening morning prayer was celebrated not in the synod hall but in St. Peter's Basilica. And it was not the typical dry recitation from the breviary.

Instead, members of indigenous communities, some wearing multi-colored, feathered headdresses and appearing barefoot, stood arm-in-arm with cardinals and bishops singing in prayer with Francis before the tomb of St. Peter.

Afterward, they processed in a group through the church before heading out into St. Peter's Square together, and then took the five-minute walk from there into the synod hall, some carrying symbols of the Amazon, including a small wooden canoe, oars, and fishing nets.

In his own 20-minute speech to open the synod's business, given in Spanish, Francis made a point to defend the right of the indigenous to observe their customs and to wear traditional outfits.

The pontiff said he had heard a sarcastic comment from someone about how one of the indigenous had worn a headdress.

"Tell me: what difference is there in having feathers on your head and the three-cornered hat worn by some officials of our dicasteries?" Francis asked, referring to the biretta cap that priests and bishops sometimes wear at Catholic liturgies.

Later, the pontiff gave his own urging for the bishops attending the synod to be unafraid of new things.

"The Holy Spirit is the main actor in the synod. Please, let's not throw the Spirit out of the room," said the pope, asking that participants allow the Spirit to express itself "through us … and despite our resistance."

The Amazon synod, which formally carries the title "The Amazon: New Paths for the Church and for Integral Ecology," officially began Oct. 6 with a Mass celebrated by Francis in St. Peter's Basilica.

In his homily for that occasion, the pontiff warned the prelates taking part against being "smothered by the ashes of fear and concern" in defense of the church's status quo.

Francis spoke first at the opening of the synod's business Oct. 7, followed by Cardinal Lorenzo Baldisseri, the head of the Vatican's synod office, and then Hummes.

A former archbishop of Sao Paulo, Brazil who led the 18 month preparation process for the synod as the president of the Pan-Amazonian Church Network (REPAM), Hummes suggested a wide range of issues for the bishops' gathering to address.

The cardinal brought up the issues of possible married clergy and ministry for women in the context of the sacramental need of Catholics across the Amazon, and the suggestions brought forth in the nearly 300 local, national and regional consultative assemblies REPAM hosted to allow people to suggest topics for the synod.

Hummes said it was during those consultations that "indigenous communities, faced with the urgent need experienced by most of the Catholic communities in Amazonia, requested that the path be opened for the ordination of married men resident in their communities."

The cardinal said likewise that "faced with a great number of women who nowadays lead communities in the Amazon, there is a request that this service be acknowledged and there be an attempt to consolidate it with a suitable ministry for them."

The other five "core issues" Hummes suggested for the synod were: the need for a church that goes forth, inculturation and inter-culturality, witness against ecological destruction, the urbanization of the Amazon region, and lack of access to clean drinking water.

Hummes was particularly forthright with regard to protection of indigenous communities and the danger of continued ecological destruction, brought to global attention this summer after wildfires spiraled out control in the region.

"This synod is held within the context of a serious and urgent climatic and ecological crisis, which involves our entire planet," said the cardinal. "The earth cannot take this anymore."

At a press briefing later Oct. 7, one synod bishop praised Hummes for his overview of the problems facing the church in the Amazon.

"All this was summarized in an excellent manner," said Bishop David Martinez De Aguirre Guinea, apostolic vicar of Puerto Maldonado, Peru. "We must accept these challenges, and we must commit ourselves to finding some answers."

Colombia Sr. Alba Teresa Cediel Castillo, who is attending the synod as an auditor, likewise praised Hummes for his focus on women's ministry. Cediel, a member of the Missionary Sisters of Mary Immaculate and St. Catherine of Siena, said women in the Amazon take up many tasks because of the lack of priests.

Women, said Cediel, often celebrate baptisms and witness marriages and even sometimes hear confessions. "Of course we cannot offer absolution, but we listen with humility," she said.

The Oct. 7 opening session will be the only session of the synod made open to the public via livestream.

The rest of the gathering's business will be conducted behind closed doors, with no release of the bishops' texts or responses to one another. The Vatican press office will instead hold daily briefings to divulge only the general themes of the issues discussed that day. 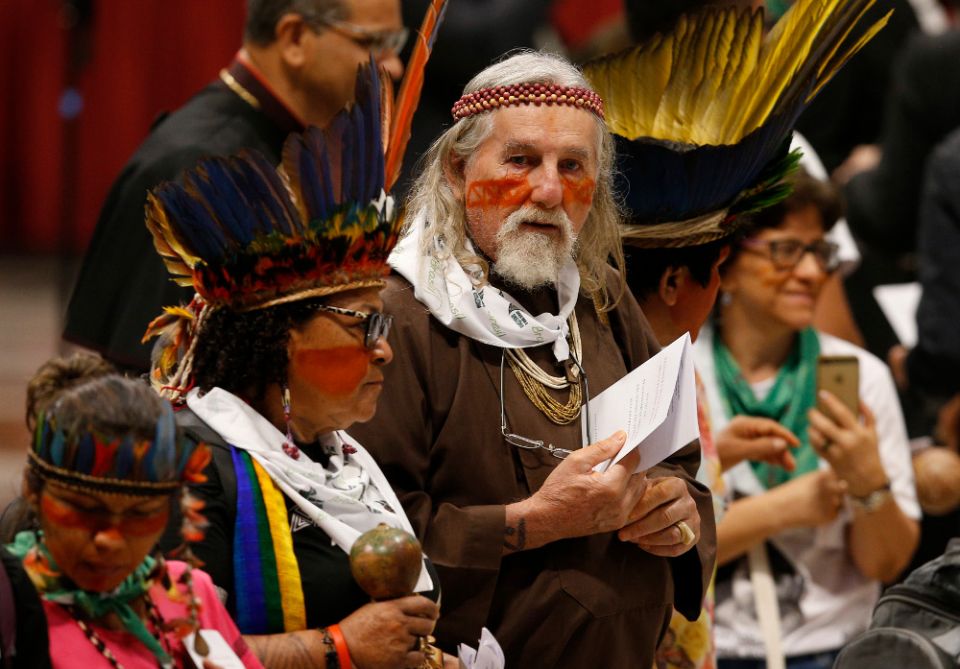 People participate in a prayer service in St. Peter's Basilica at the start of the first session of the Synod of Bishops for the Amazon at the Vatican Oct. 7, 2019. (CNS/Paul Haring)

Baldisseri explained that the synod will essentially unfold in three parts over the next three weeks: in two sets of general sessions in the main synod hall, each followed by meetings in small working groups, and then in the drafting and amending of an expected final document.

The first draft of the document will be presented in the hall Oct. 21 and will then be open to the amendment process until Oct. 25, said the cardinal. The final vote on the document is to take place Oct. 26.

Baldisseri also explained two new ideas the synod is already implementing: first, that the Vatican has bought about 120 acres of Amazon rainforest to offset the carbon footprint of the gathering; second, in another break from previous synods, the bishops can now attend sessions in clerical suits instead of their formal cassocks.

A version of this story appeared in the Oct 18-31, 2019 print issue under the headline: Francis, cardinals urge Amazon synod to consider new ideas — like married priests .

Lawsuit filed against Legionaries of Christ