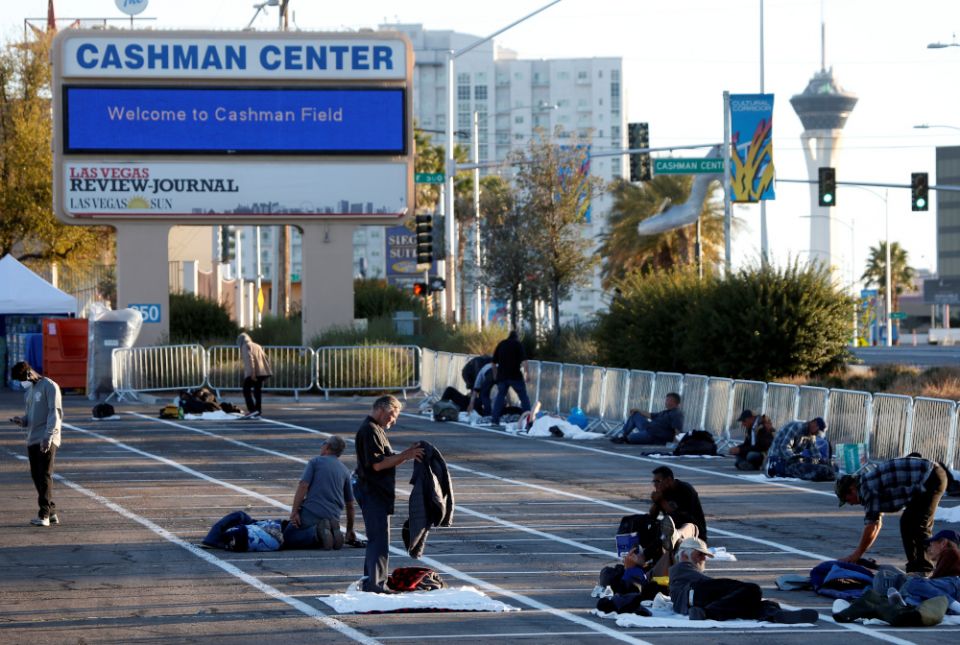 Homeless people get settled in a temporary parking lot shelter at the Cashman Center in Las Vegas March 30, 2020, with spaces marked for social distancing to help slow the spread of COVID-19. At the start of the April 2 Mass in the chapel at his Vatican residence, the Domus Sanctae Marthae, Pope Francis said he was struck by a similar photo in a local newspaper. (CNS/Reuters/Steve Marcus)

Vatican City — During his livestreamed daily morning Mass, Pope Francis prayed that the coronavirus pandemic may awaken people's consciences to the plight of homeless men and women suffering in the world.

At the start of the April 2 Mass in the chapel at his residence, the Domus Sanctae Marthae, the pope said he was struck by a photo in a local newspaper of "homeless people lying in a parking lot under observation" that "highlight so many hidden problems" in the world.

The picture that Francis apparently referred to was published April 2 by the Italian newspaper Il Messaggero that showed a temporary shelter for the homeless in an outdoor parking lot in Las Vegas.

According to an April 1 report in the New York Times, city officials chose to house the homeless in a parking lot despite that fact that thousands of hotel rooms in Las Vegas are empty.

"There are so many homeless people today," he said. "We ask St. Teresa of Kolkata to awaken in us a sense of closeness to so many people in society who, in everyday life, live hidden but, like the homeless, in the moment of the crisis, are living in this way."

In his homily, the pope reflected on the day's reading from the Book of Genesis and the Gospel of St. John. Both readings focused on the figure of Abraham and God's covenant with him.

"Each one of us is elected; no one chooses to be a Christian among all the possibilities that the religious 'market' has to offer; he or she is elected. We are Christians because we have been chosen. In this election, there is a promise, a promise of hope, a sign of fruitfulness," he explained.

However, God's election and promise are followed by "a covenant of faithfulness" with Christians that requires more than just proving one's faith by their baptism.

"The faith of baptism is an (identity) card," the pope said. "You are a Christian if you say yes to the election that God has made upon you, if you go after that promise that the Lord has made to you and if you live in a covenant with the Lord. This is Christian life."

Francis warned that Christians can stray from the path set forth by God if they do not accept God's election by choosing "many idols, many things that are not of God," by forgetting the promise of hope and by forgetting the covenant with the Lord meant to makes one's life "fruitful and joyful."

"This is the revelation that the word of God gives us today on our Christian existence," the pope said. "May it be like that of our father (Abraham): aware of being elected, joyful of going toward a promise and faithfulness in fulfilling the covenant."