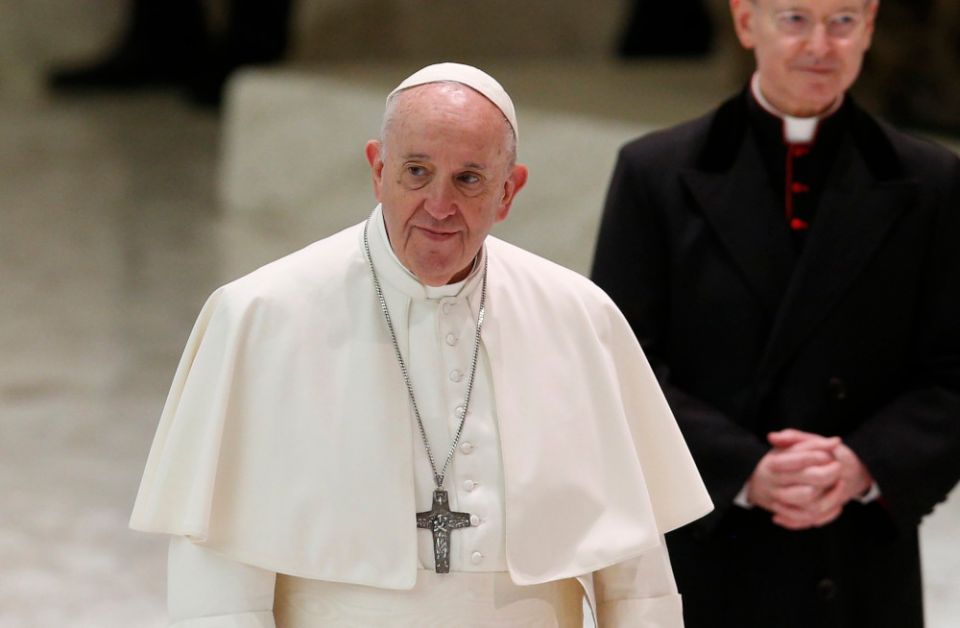 Pope Francis leads his general audience in Paul VI hall at the Vatican Oct. 28, 2020. In an interview with the Italian news agency, Adnkronos, the pope addressed the issue of corruption in the Catholic Church, his relationship with retired Pope Benedict XVI and the life of the church amid the pandemic. (CNS photo/Paul Haring)

Vatican City — Corruption is an "ancient evil" that continues to plague the Catholic Church in different ways, Pope Francis said.

In an interview with the Italian news agency Adnkronos, published Oct. 30, the pope discussed his thoughts on several issues, including the nature of corruption given recent allegations of financial malfeasance involving the Vatican.

Despite past and present efforts to root it out, the pope said, "unfortunately, corruption is a cyclical story that repeats itself" until "someone comes along to clean and tidy up."

"But then it starts again, waiting for someone else to come along to put an end to this degradation," he said. Money, as the early fathers of the church and St. Francis called it, is "the devil's dung."

In the interview, which was conducted Oct. 27, the pope said that while "the church is and remains strong, the issue of corruption is a profound problem."

Citing St. Ambrose's assertion that "the church has always been a 'casta meretrix' ['chaste prostitute']," the pope said that although the vast majority of people in the church follow "the right path," it is "undeniable that personalities of various types and depth, clerics and many fake lay friends of the church, have helped to squander the resources and property, not of the Vatican but of the faithful."

"I am struck by the Gospel reading when the Lord asks us to choose: either follow God or follow money," the pope said. "Jesus said that it is not possible to go after both," the pope said.

Francis said when he met with retired Pope Benedict XVI shortly after succeeding him, the retired pope "gave me a big box" and said, "'Everything is in here; there are the documents with the most difficult situations. I have come this far, I have intervened in this situation, I have removed these people and now, it's your turn.'"

Asked about his current relationship with the 93-year-old Benedict, Francis said he regards him as both "a father and a brother," which is why he signs letters to him with the words, "Filially and fraternally yours."

"I often visit him up there" at the Mater Ecclesiae monastery, the pope said. "And if I see him a little less recently it is only because I do not want to tire him. The relationship is good, very good. We agree on what things need to be done. Benedict is a good man; he is holiness incarnate." 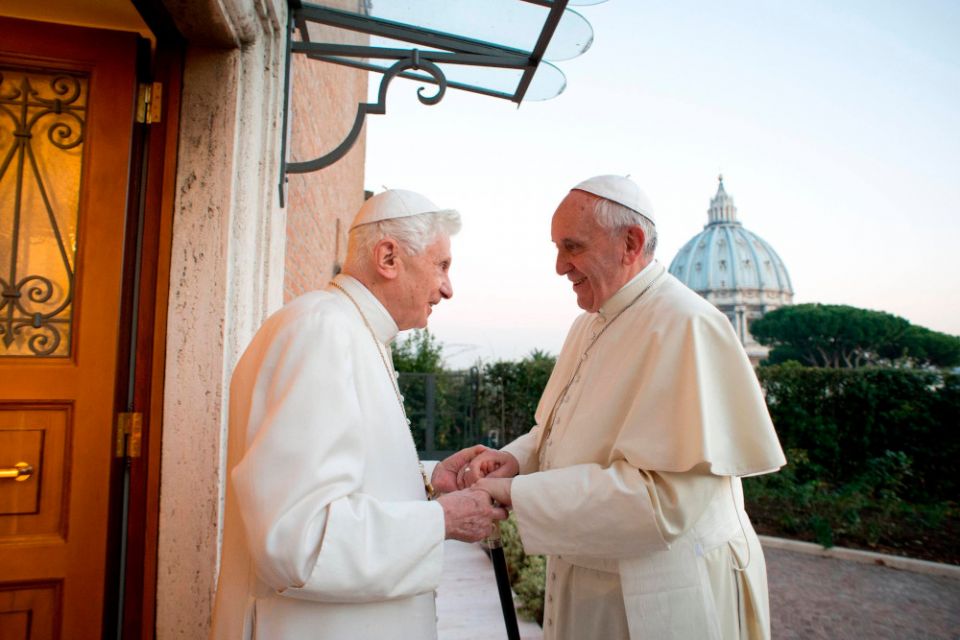 Retired Pope Benedict XVI is pictured in a 2013 file photo greeting Pope Francis at the Mater Ecclesiae monastery at the Vatican. (CNS/L'Osservatore Romano via Reuters)

Francis also said that contrary to reports of an alleged rift between him and his predecessor, "there are no problems between us."

Asked if he feels alone, especially with many reports highlighting opposition to his teaching, he replied: "I have thought about it, and I have come to the conclusion that there are two levels of loneliness. One can say I feel alone because those who should collaborate do not collaborate, because those who should get their hands dirty for others do not, because they do not follow my line or things like that. And this is a loneliness that one might call 'functional.'"

Then, he continued, "there is a 'substantial' loneliness, which I do not feel because I have found so many people who take risks for me, who put their lives on the line, who fight with conviction because they know that we are right and that the path taken, even with a thousand obstacles and natural resistance, is the right one."

Obviously, he said, there have been examples of mischief and of betrayal, which hurt those who believe in the church.

While it is uncertain whether his efforts to weed out corruption and lead the church will bear fruit, Pope Francis said that he knows he must do it and that "I have been called to do it."

Recalling his exile to Cordoba, Argentina, in the early 1990s, the pope said that in the library, he "came across six or seven volumes on the history of the popes, and even among my very ancient predecessors, I found some examples that were not exactly edifying."

While criticism against him and his papacy can hurt, especially when "said in bad faith and with malice," Pope Francis said it is also constructive because "criticism leads me to examine myself, to make an examination of conscience, to ask myself if I was mistaken, where and why I was mistaken; if I did right, if I did wrong, if I could do better."

"It's true that even if I have to find inspiration in criticism to do better, I certainly can't let myself get carried away by everything that they write about the pope that is not very positive," he said.

Vatican | Corruption in the church must be stamped out continually, pope says