Pope, Christian leaders around the globe join in prayer for pandemic's end 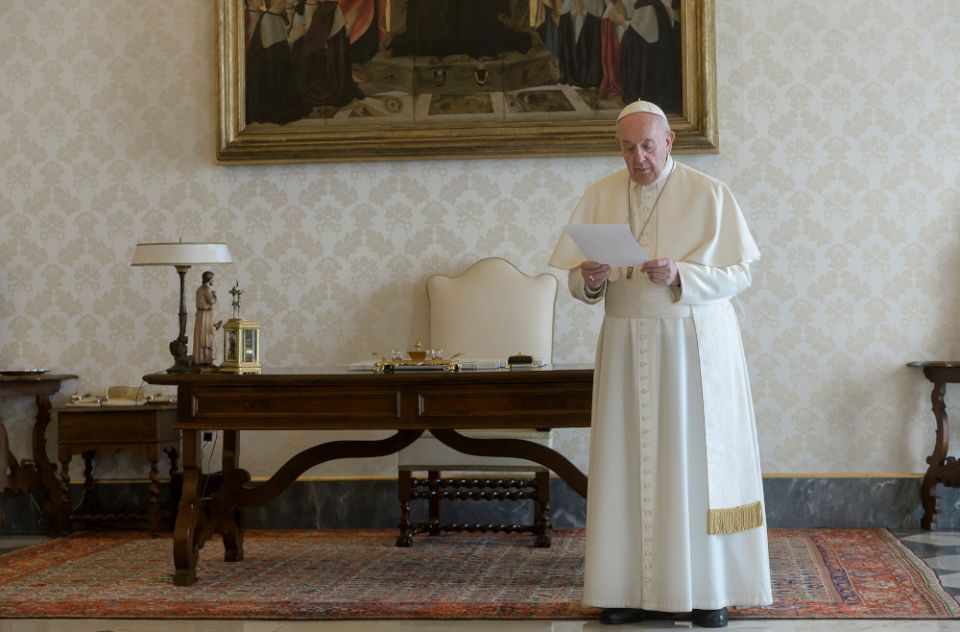 Pope Francis leads a global recitation of the Lord's Prayer from the library of the Apostolic Palace at the Vatican March 25, 2020. The pope and the Orthodox, Anglican and Protestant leaders who joined him for the prayer implored God's mercy on humanity amid the coronavirus pandemic. (CNS/Vatican Media)

Vatican City — Joined by Orthodox, Anglican and Protestant church leaders and faithful from around the world, Pope Francis led the recitation of the Lord's Prayer, imploring God's mercy on humanity amid the coronavirus pandemic.

"As trusting sons and daughters, we turn to the Lord. We do it every day, several times a day, but at this moment we want to implore mercy for all of humanity so harshly tried by the coronavirus pandemic," the pope said March 25 as he introduced the prayer.

"We will do so together, Christians of every church and community, of every age, language and nation," he said.

"We pray for the sick and their families, for health workers and those who help them, for civic leaders, police and volunteers and for the ministers of our communities," the pope said.

Holding the prayer on the feast of the Annunciation, when the angel told Mary she would bear God's son, Francis said that "with full confidence we, too, place ourselves in God's hands, and with one heart and soul, we pray."

The Church of England asked Anglicans to join Archbishop Justin Welby of Canterbury in praying with Francis and to share their photos on Twitter and Instagram with the hashtag #PrayTogether.

Welby himself tweeted: "Please join us wherever you are. Prayer unites us in testing times."

The Rev. Dr. Olav Fykse Tveit, general secretary of the World Council of Churches, encouraged all members to take advantage of the opportunity for a global prayer in the face of a global pandemic.

"As people across the globe are in their scattered working places at home, we will have the opportunity to unite our voices in praying to God with the words that our Lord Jesus Christ taught us," Rev. Tveit said. "At this challenging time, prayerful activities that unite us are a reminder that we are one human family."

While many Christians woke extra early or stayed up late to pray at the same time as Francis, others gathered for the common prayer at noon their local time.

Archbishop Jose Bettencourt, the Vatican nuncio to Georgia and Armenia, posted a photograph on Twitter of him praying with Georgian and Armenian Orthodox, Catholic and Protestant leaders at noon local time, three hours before the pope.

The Catholic bishops of Ireland called on their faithful to pray with the pope and, then, to join in prayer as Archbishop Eamon Martin of Armagh, primate of Ireland, was to consecrate the country and its people to the Immaculate Heart of Mary for protection from the coronavirus.

Earlier in the day, at the end of his livestreamed general audience, Francis told viewers, "We will unite our voices of pleading to the Lord in these days of suffering when the world is harshly tried by the pandemic. May the good and merciful Lord hear the united prayer of his sons and daughters, who call on his omnipotence with trusting hope."

While not praying with the Christians, rabbis around the world called on Jews to observe a half-day fast March 25, and Israel's Chief Rabbi David Lau also asked that during the traditional afternoon prayers, called the "Mincha," people add the "Selichot" prayers, which are prayers for forgiveness.

In addition, the Jerusalem-based Interfaith Encounter Association, which brings together Israelis and Palestinians of different faiths, announced an "Interfaith Prayer for Humanity's Health" the same afternoon.

"As both the pope called Christians to pray at midday (March 25) and the Chief Rabbinate of Israel called Jews to pray at 4:30 p.m. that day — for the same goal to implore God to rid the world of the coronavirus pandemic — we thought it would be most appropriate to connect the two with an interfaith prayer in the middle," the association said in a March 24.

When individuals and governments are taking "harsh measures" to slow the pandemic, the group said, "it is important to add the active aspect of prayer. When our main measures are physical separation from one another, it is vital add the connection of our hearts in mutual care."

Vatican | Pope, Christian leaders around the globe join in prayer for pandemic's end

Even when people reject God, his love is never lacking, pope says