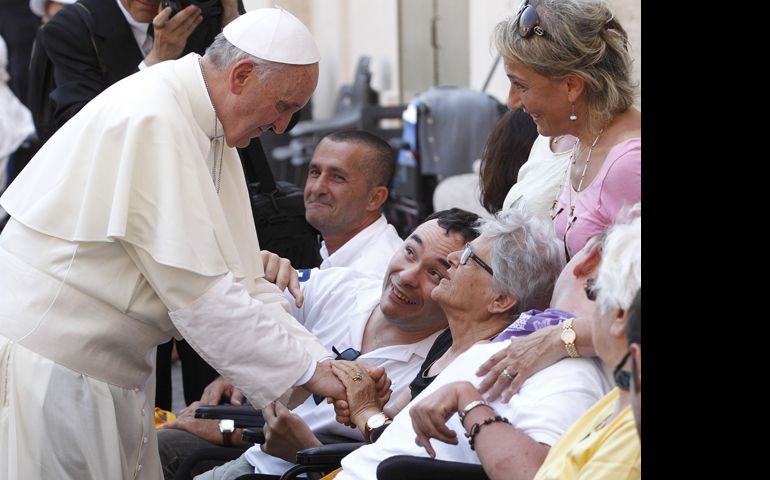 This is the third in a series of articles examining Pope Francis' recent interviews. A new article will be published each day this week on NCRonline.org.

In the last 50 years, we have had five popes. The first four were at the Second Vatican Council as either bishops or peritus (theological advisers). Francis may not be a pope from the council, but he is quickly establishing himself as a pope of the council. Each of his recent predecessors, to be sure, carried forward particular elements of the council's teaching. This pope, however, has received the council's teaching through his distinctive experiences as a Jesuit, a Latin American and, pre-eminently, as pastor. His pontificate represents a fresh new phase in the ongoing reception of Vatican II, one shaped by a variety of post-conciliar developments.

Pope Benedict XVI seemed to prefer a smaller, doctrinally purer church. He wanted a church willing to confront the pernicious forces of secularism. Francis has expressed his preference for Vatican II's image of the church as the people of God. His words and deeds evoke a more expansive, extroverted church that must be "the home of all, not a small chapel that can hold only a small group of selected people." He sees a church that must risk making mistakes by going out into the world and engaging people where they are. He wants a church that can foster a "culture of encounter."

The church he calls for would be messier because it makes a space for honest dialogue, listening and even disagreement. For example, in his recent interview with Jesuit publications worldwide, he reflects on what it means to "think with the church." For him, this starts with getting beyond our own self-styled and often self-serving credos. Yet "thinking with the church" also means much more than a scrupulous, servile obedience to every ecclesiastical decree. It means thinking with the whole church and not just the ones who count ecclesiastically. It means daring to enter into a "complex web of relationships," living in receptive solidarity with all God's people. It means recalling not only the infallibility of the church's teachers but also, as the council taught, the infallibility of the believing church.

"When the dialogue among the people and the bishops and the pope goes down this road and is genuine," the pope contends, "then it is assisted by the Holy Spirit." He calls for the reform of consultative and collegial structures (e.g., episcopal synods) because he wants a humble, listening, discerning church.

Francis emphasizes the council's teaching that the church is "missionary by her very nature" (Ad Gentes). His outspoken advocacy for the poor and marginalized has led him to set liberation theology free from its ecclesiastical dungeon and restore it as a legitimate and necessary response to the council's missionary imperative. Francis calls for a church sent in mission as an instrument of God's mercy and justice. "The thing the church needs most today is the ability to heal wounds and to warm the hearts of the faithful; it needs nearness, proximity. I see the church as a field hospital after battle."

He is not interested in church reform that amounts to a mere rearranging of the ecclesiastical furniture. Authentic ecclesial reform will be in service of the church's mission. In an address to the coordinating committee of the Episcopal Conference of Latin America, or CELAM, during his visit to Brazil in July, he said:

The "change of structures" [from obsolete ones to new ones] will not be the result of reviewing an organizational flow chart, which would lead to a static reorganization; rather it will result from the very dynamics of mission. What makes obsolete structures pass away, what leads to a change of heart in Christians, is precisely missionary spirit.

There are some who believe that too much is being made of Francis' distinctive style. It is great that he lives more simply, pays his own bills and drives a 30-year-old Renault, but the fact remains, the argument goes, that at the level of church doctrine, this pope has changed nothing. Put bluntly, whatever one makes of Francis, women won't be ordained and gays are still viewed as intrinsically disordered.

But how helpful is this "style vs. substance" distinction? "Substance," in this case, means doctrine understood as a set of essential propositions unaffected by pastoral application. The distinction has real limits, however, because Francis doesn't think about doctrine as a set of absolute truths. In an open letter to an Italian intellectual and nonbeliever, Francis admitted his reluctance to speak of "absolute truth," not because he was a "relativist" but because for Christians truth is mediated through a person, Christ, and is encountered in history. Here the pope stands firmly within the theology of revelation articulated in Vatican II's Dei Verbum.

Vatican II offered a new way of thinking about doctrine; it presented doctrine as something that always needed to be interpreted and appropriated in a pastoral key. This is why Francis can insist, "The dogmatic and moral teachings of the church are not all equivalent." Rather, they find their true pastoral significance within "proclamation in a missionary style [that] focuses on the essentials, on the necessary things." This is why he doesn't think he is compromising on doctrine when he suggests we may need a more compassionate pastoral response to the divorced and remarried. Being pastoral, in short, is not a matter of overlooking doctrine; it is how pastoral "style" makes doctrinal "substance" meaningful and transformative.

Will this pope rewrite controversial church doctrines? No, but that isn't how doctrine changes. Doctrine changes when pastoral contexts shift and new insights emerge such that particular doctrinal formulations no longer mediate the saving message of God's transforming love. Doctrine changes when the church has leaders and teachers who are not afraid to take note of new contexts and emerging insights. It changes when the church has pastors who do what Francis has been insisting on for the last six months: Leave the security of your chanceries, rectories, parish offices and episcopal residences. Set aside the "small-minded rules" that keep you locked up and shielded from the world. Go meet the people where they are.

If Francis succeeds in creating a new generation of pastor-leaders who are willing to meet the people where they are, who are willing to create what he has called a "culture of encounter," he will have created the necessary conditions for appropriate doctrinal change. That's how it works.

Six months into his pontificate, it is too early to know whether Francis will succeed in moving from tantalizing symbolism to real structural change. But we do know where he wants to take our church. Over the past five decades, we have been tantalized by empty allusions to Vatican II that too often masked halfhearted efforts to give the council's teaching robust historical form. Francis wishes to release the council's bold ecclesial vision and deep-seated Gospel values from decades of captivity. It has been a long time coming.

Tomorrow: Michelle A. Gonzalez writes about the papacy and machismo.

Tuesday: "It will be hard to go backward after Francis' papacy," by Richard Rohr

[Richard Gaillardetz is the Joseph Professor of Catholic Systematic Theology at Boston College.]