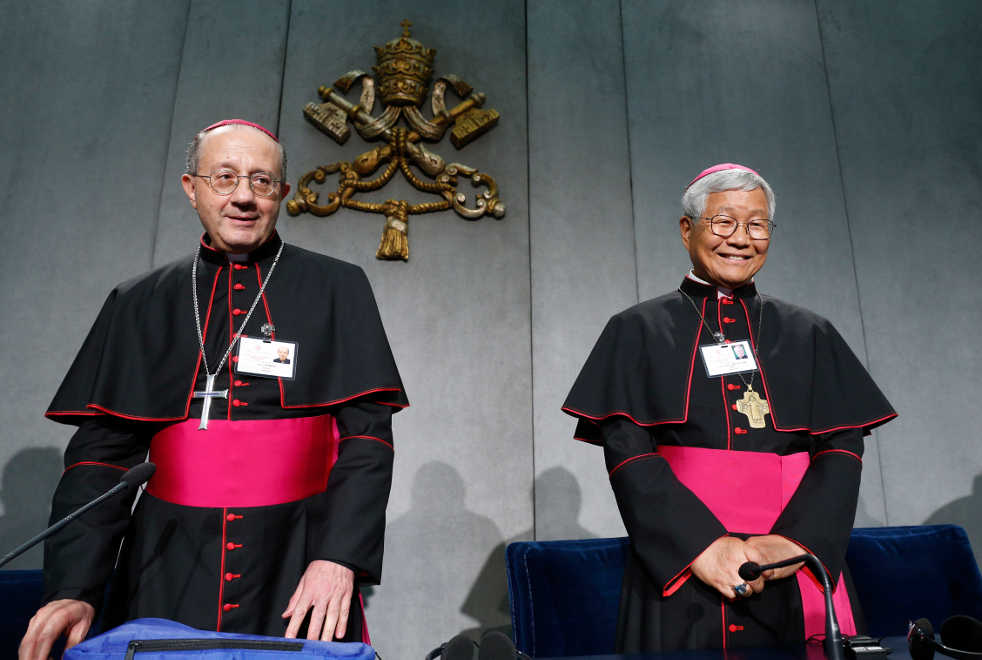 Italian Archbishop Bruno Forte of Chieti-Vastoa and Bishop Lazarus You Heung-sik of Daejeon, South Korea, at a news conference for the Synod of Bishops on young people at the Vatican Oct. 11. (CNS/Paul Haring)

A possible papal trip to North Korea would be “a gigantic step,” but North Korea must first “do the groundwork” before Pope Francis could go, a South Korean bishop said, adding that the pope “brings much fruit” wherever he goes.

"Listening to this news, I think about how beautiful it would be if the pope could go to Pyongyang. But in reality there are many steps to take,” Bishop Lazarus You Heung-sik of Daejeon, South Korea, said at a press briefing during the Synod of Bishops on Young People, Faith, and Vocational Discernment.

“To go there, some things have to change in North Korea; namely, there are not now priests in North Korea,” You Heung-sik said, also mentioning “religious freedom” as an issue.

He clarified that he was not talking about conditions for the visit. “But before you do something you have to do the groundwork. When the groundwork is done, the pope can go,” he told reporters after the Oct. 11 briefing.

“I think the pope will now listen to my president about the situation,” he said.

Earlier this week, the Vatican confirmed a meeting between South Korean President Moon Jae-in and Pope Francis on Oct. 18. Moon also will participate in a “Mass for Peace” for the Korean Peninsula, with Secretary of State Cardinal Pietro Parolin, the night before the meeting.

In September, Moon told North Korean President Kim Jong-un that an invitation to the pope would be the “best way to enter into the international order,” You said. Kim’s spokesperson has since confirmed the invitation.

During his visit to the Vatican, Moon will speak "directly" about Kim's offer, he said.

You, who has traveled four times to North Korea on humanitarian visits as president of Caritas Korea, said he is hopeful for peace in Korea.

"I believe that North Korea is ready to open-up, to renounce nuclear arms [and] to create a new country," he said.

“North Korea cannot turn back. They must move forward,” he told reporters. “Certainly there will be many difficulties in this dialogue. But I think it will go forward and reach peace in Korea.”

“We need to pray and we will see what God wants,” he said. “I am convinced that when that day comes, it will be a dream. I think it can be realized.”