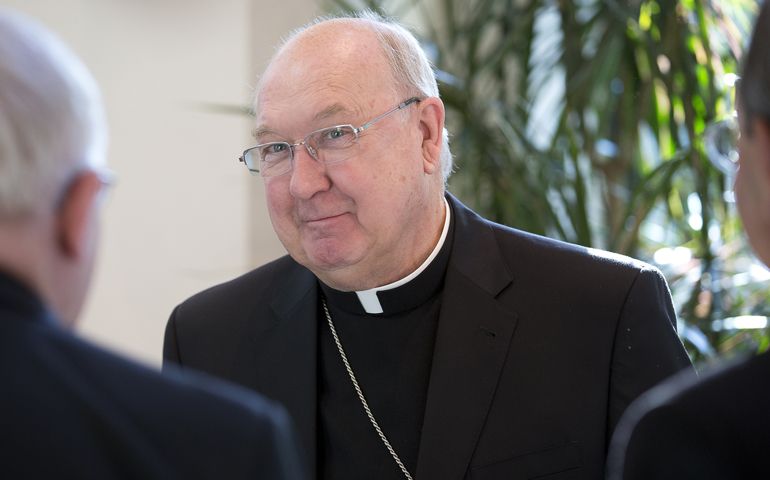 Vatican City — The Catholic prelate Pope Francis recently appointed both as a cardinal and the head of the Vatican's new centralized office for laypeople says he considers the pontiff's apostolic exhortation on family life inspired by the Holy Spirit and plans to make it his department's guiding document.

Speaking in an NCR interview Thursday, Cardinal-designate Kevin Farrell said he has a hard time understanding why some bishops have reacted negatively to Amoris Laetitia ("The Joy of Love.")

"I honestly don't see what and why some bishops seem to think that they have to interpret this document," said Farrell, the head of the new Dicastery for Laity, Family and Life and who last Sunday was announced as one of 17 prelates selected by Francis to join the church's elite College of Cardinals.

"I believe that the pope has spoken," said the cardinal-designate, referring to news last month that Francis wrote a letter praising a group of Argentine bishops who had drafted concrete guidelines about circumstances in which divorced and civilly remarried couples might eventually be allowed to receive Communion.

The issue of the church's ministry to divorced and remarried people is addressed in the exhortation, which calls for pastoral accompaniment of such persons and a recognition that priests can no longer make blanket moral determinations about so-called "irregular" situations.

The exhortation, issued in April, was the pope's response to two Synods of Bishops he held at the Vatican in 2014 and 2015 focused on issues of family life.

Farrell, an Irish native who had previously served as bishop of Dallas, said he understood that the U.S. bishops' conference will be discussing Amoris Laetitia at its annual meeting in November.

"I think that the document Amoris Laetitia is faithful to the doctrine and to the teaching of the church," said Farrell, referring next to a 1981 exhortation on family life written by one of Francis' predecessors: "It is carrying on the doctrine of Familiaris Consortio of John Paul II. I believe that passionately.

"Basically this is the Holy Spirit speaking to us," the cardinal-designate continued.

"We need to be consequential here," said Farrell. "I firmly believe this is the teaching of the church. This is a pastoral document telling us how we should proceed. I believe we should take it as it is."

The cardinal-designate said divorced and remarried people should be included "in all the ministries of the church."

"That doesn't mean that I'm telling you that they should receive Communion," said Farrell. "That's a process of discernment and of conscience."

"I believe that that's what we need to do," he continued. "But it has to be taken seriously. It's not just walking in and sitting down with a priest and talking with him. It's a journey. It's discernment."

The cardinal-designate also said he expects the exhortation will be the basis of his work at the new dicastery.

"That will be the guiding document without a doubt for the years to come," said Farrell.

"I think that we all need to read that document many, many times," he said. "I have read it probably seven or eight times and I find every time I'm reading it as if I'm reading it for the first time. There's something new."

Farrell spoke about the pope's exhortation as part of a half-hour interview at his new office in Rome's Trastevere neighborhood. He also spoke about his expectations for his new role, and focused on how he sought to give authority to laypeople during his time in Dallas.

Noting that he had only arrived in Rome to take up his role last Friday, Farrell said he was spending most of his time now listening to his staff members to learn about their work.

"I'm just trying to listen to people," said the cardinal-designate. "It's not like I come with all brilliant ideas. I have to come, I have to learn, I have to listen for several months."

"I am the type of person that likes to hear other people's opinions," he said. "I like to listen a lot. I like to consult a lot and see where we go from here."

Farrell said he thought the pope had created his new office -- combining the former pontifical councils for the laity and the family and the Pontifical Academy for Life -- as a way of expressing concern for and to give voice to laypeople.

"I think the pope is duly concerned about the laity and the role of the laity in the church ...  especially when you think of the fact that 99 percent of the people that go to church on Sunday are laity," said the cardinal-designate.

"They're not associated with religious orders or movements of spiritual groups," he said. "They are just ordinary, everyday Catholics. I think the pope is deeply concerned about that and wants the Catholic people to feel supported and understood, and to have a voice."

"They are the greatest part of the Catholic church and certainly they have to have a voice in the church," said Farrell of laypeople. "I think the pope is going back to the Second Vatican Council. That's what it was all about."

"Now, as Pope Francis says, it's time to put it into practice," he said. "I guess they are my marching orders. I'm glad to do it."

In Dallas, where he had served since 2007, Farrell created a 16-member lay pastoral advisory committee to give him advice in administering the diocese. Remembering the experience, he said the group would often expand to 25-30 people and he would meet with them alone, without any of his chancery staff.

The priests of the different regions of the diocese appointed the members of the group, he said.

"I would consult with them about any pastoral decisions that I was faced with," said the cardinal-designate. "We would have some wonderful conversations about parishes, about what was happening in different parts of the diocese, what they felt I should be doing about some social issues. It was very informative."

Farrell also said he worked to limit the number of priests working full-time at the Dallas chancery office, having priests serve only as the vicar for clergy, the judicial vicar, and the vocation director. He also said he was one of the first U.S. bishops to appoint a chief of operations to oversee the diocesan administration.

"I prefer to have laypeople running the different offices," he said. "I gave a lot of credence and authority to the pastoral council and to ... [the] finance council to take care of all the business of the diocese."

"I've always tried to promote laypeople in the church, and for selfish reasons: we didn't have enough priests to run our parishes," said Farrell.

"I would hope that the priests would be what they're supposed to be: sacramental, and teaching the faith," he said. "And leave the administration to people who were more competent than they were, laypeople. That's what I tried to do."

While Farrell said he is not sure yet how the departments of his new dicastery will be organized, he said at this point he expects all of his undersecretaries will be laypeople.

"Women bring a unique perspective to many issues," said Farrell. "That was one thing I learned very early on from meeting with pastoral councils. I would see things one way from a chancery office, but they would see it a completely different way from living the reality of everyday.

"I think that many times in dioceses, diocesan officials can come up with wonderful plans and wonderful pastoral plans for different things but is that the reality?" he continued. "And is that what -- to use a business term -- sells in the community?"

Farrell also called for better opportunities for training for adult laypeople in the faith, beyond basic catechetical instruction.

"I would put a lot of emphasis on the formation of laity at every level," said the cardinal-designate. "I think conferences of bishops need to be more involved in promoting the education of laity."

"You think about parishes in the United States," he continued. "We have programs of religious education for kids, for young adults but we don't necessarily focus on everybody in our parishes."

"That can be clearly seen as one great flaw in the United States, where I come from," he said. "Now, that doesn't mean it doesn't happen. It does in many dioceses but I would say we pay more attention to young children's education in the faith and then once they get to a certain age they're left on their own."

'I still have to pinch myself'

Farrell said his appointment to lead the office in Rome came as a complete surprise, as did his more recent appointment as a cardinal.

"I was totally shocked and humbled by the whole thing," said the cardinal-designate. "I still have to pinch myself. This cannot be true. It's not me. It's not Kevin Farrell."

Asked if he knew why the pope had chosen him to come to Rome, Farrell responded: "I have no idea. I would love to know."

"I said to the Holy Father, 'Look, why did you pick me?'" he said, speaking of a recent audience with Francis. "He just smiled." 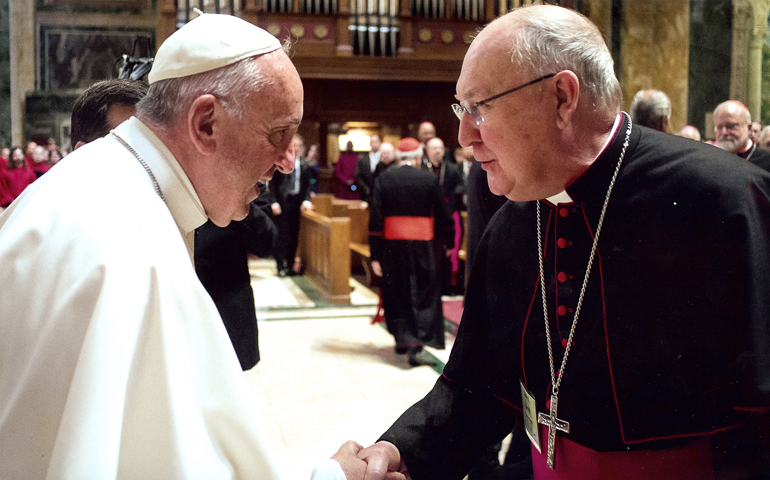 "I had met the Holy Father at audiences, but you know how those audiences are: the pope meets 20, 30 bishops and shakes their hands," the cardinal-designate explained. "Outside of that, I had never met the man before."

Asked what he thought the pope needs most from his cardinals, Farrell responded: "To be very honest, I've never given it any thought."

"I would hope to serve the people and to serve the pope as much as I can," said the cardinal-designate, mentioning that while serving in Washington he had witnessed the work of Cardinals James Hickey, Theodore McCarrick and Donald Wuerl.

"I think it is an awesome responsibility and I think a cardinal has to live up to that responsibility," he said. "But I think first of all they have to be teachers and servants at the service of the People of God. I've always thought that about the bishop. I think that about a cardinal, too."

God's loving care should be applied to remarriage cases