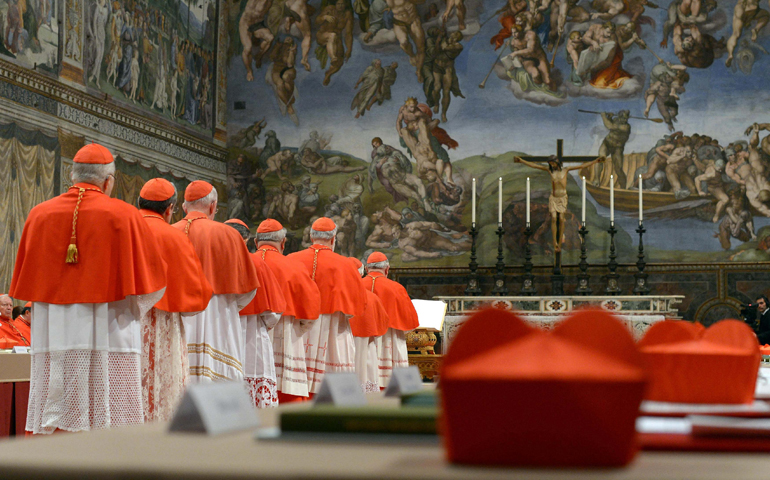 Next month, Pope Francis will create at least 14 cardinals, an action that will not only impact his papacy and the church today, but will also determine the direction of the church after his papacy. One of these cardinals may even be the next pope.

Because of the cardinals' role in the church, their creation is one of the most important actions of a pope. Cardinals fulfill three important functions in the church.

First, cardinals provide leadership in their own countries. Although canonically they do not have any power over other bishops, they tend to head the largest archdioceses and have great influence in their episcopal conferences. They also get more attention in the media; people in red hats tend to stand out in a crowd.

Second, cardinals help the pope in the governance of the universal church. Not only are cardinals the heads of major offices in the Roman Curia; diocesan cardinals also serve as members of Vatican congregations and councils advising these offices and the pope. They are also more likely to be chosen to attend Synods of Bishops.

Finally, and most importantly, they will elect the next pope, who most likely will be a cardinal himself, although that is not required. As a result, whom the pope appoints as cardinals is one of the most important ways he can influence the future direction of the church.

The church today is a church of many nations and cultures, not simply the European church of earlier centuries. The College of Cardinals needs to reflect that reality. When talking about the internationalization of the College of Cardinals, the giant in the room is Italy, which, with only 4 percent of the world's Catholics, has always had a disproportionate share of the college.

Up until the papacy of Pius XII, a majority of the cardinals were from Italy. When he was elected in 1939, 57 percent of the cardinals were from Italy and 32 percent were from the rest of Europe. He reduced the Italian contingent to a third of the college while increasing the number of cardinals from outside Europe, including the first cardinals with sees in China, Africa and India. But the major winner was Latin America, which went from 3 percent of the college to 16 percent, setting the stage for the election of the first Latin American pope last year.

The first question Pope Francis must face: Does he allow Italy to maintain the gains it made under Benedict, or does he follow the example of Pius XII, Paul VI and John Paul II and reduce the Italian contingent?

Today, Latin America has only 14 cardinals, 13 percent of the college. Pope Francis, therefore, has an opportunity to remake the leadership of the church in the continent he knows best. Even if he keeps to historical numbers, the pope could easily appoint 8 to 10 cardinals in Latin America. It is possible, then, that at least half the new cardinals will be from Latin America. If he follows the example of John Paul, who reduced the Italian contingent so he could increase the number of cardinals in Eastern Europe, he could go even higher.

If the pope follows historical trends, there will be few appointments in the rest of the world. Western Europe is currently 18 percent of the college, which means it could get a couple of cardinals.

The United States, Asia, Africa and Eastern Europe each traditionally have about 10 percent of the college. That would mean only one new cardinal for each.

The U.S. archbishops most likely to become a cardinal would be Archbishop Charles Chaput of Philadelphia or Archbishop Jose Gomez of Los Angeles, but they could be easily passed over this year since their predecessors, Cardinal Justin Rigali and Cardinal Roger Mahony, are still under 80 years of age. Rarely does the church have two cardinals under 80 from the same diocese. This would mean no new red hats for the United States this year.

Finally, the pope will probably appoint at least two new cardinals for the Roman Curia, the new secretary of state and the prefect of the Congregation for the Doctrine of the Faith. As I have argued elsewhere, this would be a terrible mistake. The Roman Curia will never be truly reformed as long as its members are made bishops and cardinals. It will continue to act like a papal court rather than like a civil service serving the pope and the college of bishops.

As late as 1939, almost half the cardinals were members of the Curia. Pius XII reduced this percentage to 24 percent. John XXIII brought it back up to 37 percent, but Paul VI cut it back to 27 percent, and John Paul inched it down to 24 percent. The Curia regained ground under Benedict, who left the Curia cardinals as 35 percent of the electors at last year's conclave. Here, Francis needs to imitate Pius XII and John Paul II, not John XXIII and Benedict XVI.

Despite the pope's absolute discretion in appointing cardinals, tradition weighs heavy on his choices. For example, almost all of his appointees will be archbishops appointed under Pope Benedict or John Paul. It will take years for him to appoint his own archbishops whom he can later make cardinals.

Hopefully, February will not be Pope Francis' only chance to create new cardinals. This year, another 10 cardinals will turn 80, followed by another 5 in 2015 and 13 in 2016. Thus, by the end of 2016, not counting deaths, he could replace 42 members of the college.

All of this presumes that Pope Francis will observe the canonical limit of 120 cardinals under the age of 80, the age at which cardinals lose the right to vote in a conclave. He could easily raise the number by two, since two more cardinals will turn 80 in March. He could appoint even more if he follows the example of John Paul, who raised the number to 135 in 2001. Granted Pope Francis' willingness to break tradition and ignore canon law, I would not be surprised to see him appoint more than 14 cardinals. This will allow him to appoint more cardinals around the world.

It will be many years, we hope, before we know if one of the new cardinals will be the next pope, but certainly, they will be have a profound influence on the future of the church.

[Jesuit Fr. Thomas Reese is a senior analyst for NCR. His email address is treesesj@ncronline.org. Follow him on Twitter: @ThomasReeseSJ.]