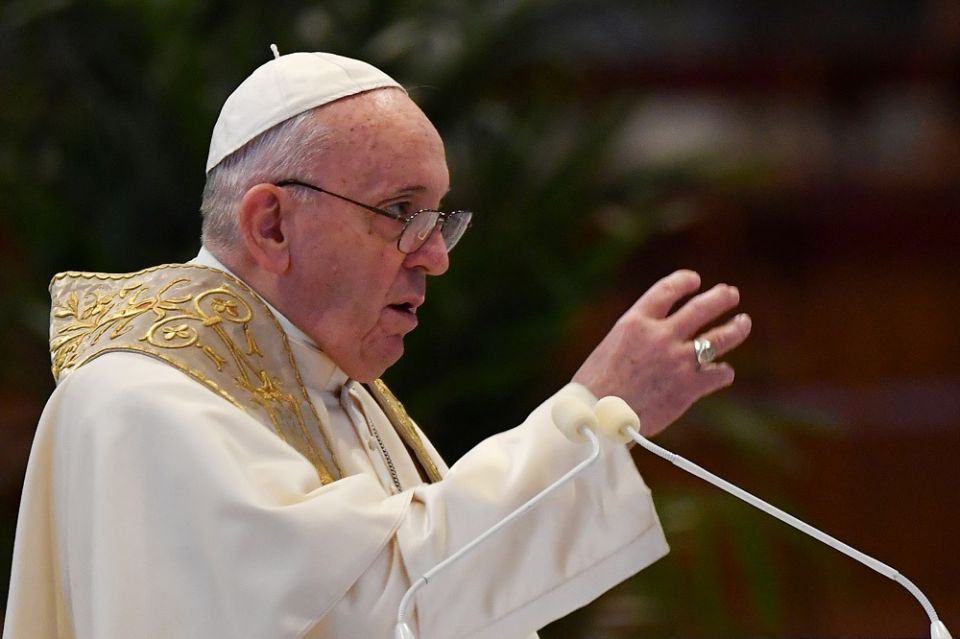 Pope Francis delivers his Easter blessing "urbi et orbi" (to the city and the world) after celebrating Easter Mass in St. Peter's Basilica April 12 at the Vatican. (CNS/Reuters pool/Andreas Solaro)

Vatican City — Writing to social movements, including organized groups of casual laborers, Pope Francis said the COVID-19 pandemic should give rise to consideration of "a universal basic wage" to guarantee people have the minimum they need to live and support their families.

"Street vendors, recyclers, carnies, small farmers, construction workers, dressmakers, the different kinds of caregivers: you who are informal, working on your own or in the grassroots economy, you have no steady income to get you through this hard time," Francis wrote in an Easter message.

The letter, dated April 12, was sent to organizations that have participated in the World Meeting of Popular Movements, which the pope has hosted twice at the Vatican and attended in Bolivia in 2015.

"The ills that afflict everyone hit you twice as hard," the pope wrote. "Many of you live from day to day, without any type of legal guarantee to protect you."

Government-ordered lockdowns to slow the spread of the virus have meant that many casual laborers have no work and, therefore, no income.

"This may be the time to consider a universal basic wage which would acknowledge and dignify the noble, essential tasks you carry out," the pope said. "It would ensure and concretely achieve the ideal, at once so human and so Christian, of no worker without rights."

Francis did not say whether he meant the idea as a permanent policy or simply as a temporary response to the poverty and unemployment caused by the pandemic and a means of keeping national economies growing. Many wealthier countries have promised to cover part of the salaries of those not working during the pandemic or to issue "stimulus" checks to their citizens.

Calling the pandemic a "time of danger," Francis said he hoped it would serve to "free us from operating on automatic pilot (and) shake our sleepy consciences" in order to spark a conversion that "puts an end to the idolatry of money and places human life and dignity at the center."

"Our civilization — so competitive, so individualistic, with its frenetic rhythms of production and consumption, its extravagant luxuries, its disproportionate profits for just a few — needs to downshift, take stock and renew itself," he wrote.

Members of the popular movements and collectives like those made up of people who sort trash for recycling "have known crises and hardships," he said, but they have managed to transform them "with modesty, dignity, commitment, hard work and solidarity into a promise of life for your families and your communities."

The groups are not powerless, he said, and already should be thinking about '"life after the pandemic,' for while this storm shall pass, its grave consequences are already being felt."

He urged them to continue the struggle for the rights of everyone to the "three Ts that you defend: Trabajo (work), Techo (housing) and Tierra (land and food)."

If fighting the pandemic is a war, he said, then the social movements are "truly an invisible army, fighting in the most dangerous trenches; an army whose only weapons are solidarity, hope and community spirit, all revitalizing at a time when no one can save themselves alone."

Francis praised "all the people, especially women, who multiply loaves of bread in soup kitchens: two onions and a package of rice make up a delicious stew for hundreds of children."

"I think of the sick, I think of the elderly. They never appear in the news, nor do small farmers and their families who work hard to produce healthy food without destroying nature, without hoarding, without exploiting people's needs," he said.

"I want you to know that our heavenly Father watches over you, values you, appreciates you and supports you in your commitment," he said.