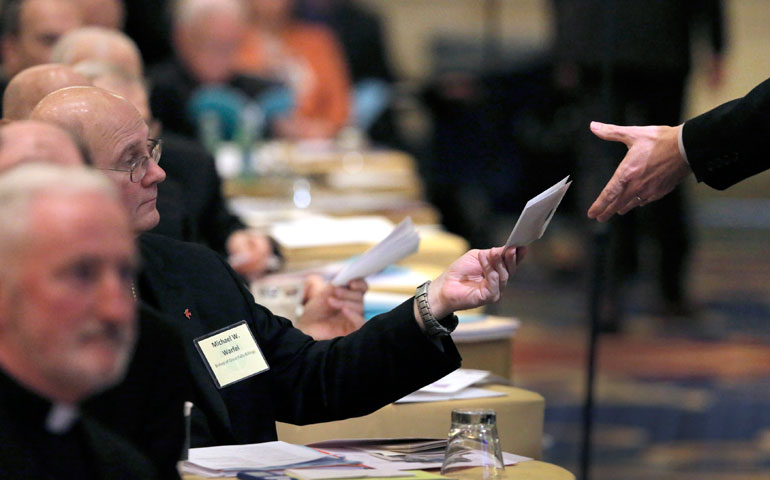 Bishop Michael Warfel of Great Falls-Billings, Mont., turns in his paper ballot during the 2015 fall general assembly of the U.S. Conference of Catholic Bishops in Baltimore Nov. 17. (CNS/Bob Roller)

Less than a week before the Catholic bishops of the United States gathered for their annual meeting Nov. 16-19 in Baltimore, Pope Francis addressed a national council of the Italian church, exhorting its members not to place ultimate trust in structures, organizations and plans, but to embrace a church that is ever-changing.

If there was doubt about how integral change is to Francis' view of the Catholic endeavor, he spoke of the church semper reformanda, always reforming, and declared: "We are not living in an era of change but a change of era."

The papal language was perhaps more forceful and comprehensive in that talk than in previous orations, but it was hardly new. From the earliest days of his pontificate, Francis' words have been rich in the language of movement and change, of his wish for a church unencumbered by old attitudes and habits, moving beyond the confines of church structures and into the streets.

A "church for the poor" and "on the peripheries" have become defining phrases, and he has repeatedly voiced his preference for a church willing to risk mistakes to one that seeks the safety of the familiar.

How his vision of church plays out at the local level is evident, in part, in the work of national conferences. In the case of the U.S. Conference of Catholic Bishops, the measure could be taken in two ways: first, in the significant documents that passed by wide margins and, second, in the sub rosa conversation that always circulates around the main meeting room.

In the first instance, it is easy to draw the conclusion that little has changed. Except for one, a condemnation of pornography, the documents and proposals were retreads of previous work. The lack of engagement with Francis' vision was seen by one outside observer as evidence of the "disconnect" between bishops and ordinary Catholics.

A Catholic historian also saw the reluctance to adapt the tone and priorities of the current papacy as a signal that the American hierarchy simply doesn't trust Francis' vision.

The statement garnered 230 votes (181, or two-thirds of diocesan bishops, were needed to pass). If there was a surprise, it perhaps was that four bishops voted against it and one abstained.

The bishops' priorities and strategic plans, a document outlining five areas of emphasis for the conference for 2017-20, remained the same as those in the past, with some updated language from Francis about poverty and the environment. It passed by a vote of 233-4.

The additions seemed to satisfy objections raised by some bishops during their last meeting to what they described as a simple repetition of the previous priorities with little indication that the pope had elevated other issues to positions of prominence.

A similar critique was made of the final piece of major work considered, the document "Forming Consciences for Faithful Citizenship," which was an updated version of the bishop's statement on political responsibility issued in 2007. The debate that ensued over "Faithful Citizenship" clearly revealed the fault line in the conference separating the wish of some to move aggressively on the Francis agenda and those who favored the status quo with limited revisions.

Bishop Robert McElroy of San Diego offered the most thorough case for those who wished to scrap the old statement entirely and refashion a position that placed concern for the poor and the environment at the core of Catholic social teaching.

He said he thought the original mandate to the committee, to do a limited revision of the earlier document, was an error because so much had changed.

"If I understand Pope Francis correctly," said McElroy, "the issue of poverty, particularly global poverty, with all of its victimization of men and women across the world, and children, the global poverty and degradation of the Earth, which threaten the whole of our humanity, that these two issues lie at the very center and core of Catholic social teaching as priorities for us in every public policy position. And that is not reflected in this document."

The revised document, McElroy said, "keeps to the structure of the worldview of 2007. It tilts in favor of abortion and euthanasia and excludes poverty and the environment."

Galveston-Houston Cardinal Daniel DiNardo, clearly annoyed, shot back that he believed "ours is a hermeneutic of continuity here, bishop."

He said the group of 10 chairmen of conference committees who worked on the document "believe we also read [the pope] correctly" and had revised "with real attentiveness to the pastoral ministry and magisterium of Pope Francis," though "perhaps not to your satisfaction" nor with "the rhetorical flourish with which you bring them."

The phrase "hermeneutic of continuity" is a phrase attributed to Pope Benedict XVI, but considerable debate exists over its use by some as extracted from a complex speech delivered by Benedict in 2005 in reference to interpretations of Vatican II.

That the bishops continue to highlight the same issues -- abortion, same-sex marriage, and religious freedom -- shows a "disconnect with the language and concerns of ordinary Catholics," said Michele Dillon, professor of sociology at the University of New Hampshire.

"The world has changed and the reality has changed since 2007," said Dillon, who has done extensive research on the state of the U.S. church in recent decades. She said such issues as the church's growing Hispanic population, immigration, the environment and poverty are given little treatment in the new document.

She criticized the bishops' continued emphasis on religious freedom, saying, "An objective view of American society shows that religious freedom is not problematic. It is used by some conservatives to argue against certain social changes that they can't stop."

Continuing to emphasize the annual "Fortnight for Freedom" above other pressing problems shows the bishops "increasingly out of touch with day-to-day concerns of Catholics as well as the wider culture," Dillon said.

Francis "wants dialogue," she said. But "dialogue didn't really happen" during the bishops' meeting. "I believe the conference itself needs to find more room to have dialogue."

In the scores of receptions and programs held by Catholic organizations and interest groups in salons surrounding the main meeting room, a pervasive conversation centered on when "the Francis agenda" might catch fire within the conference.

Staffers, those doing business with the conference, and not a few bishops -- all guaranteed anonymity, in discussions that would never be voiced on the floor of the meeting -- wondered when it would happen. Was it simply a matter of playing out the old agenda? Was it a matter of waiting until Francis' episcopal appointments tipped the scales in a new direction?

Was it simply that "regime change" -- in the language of one bishop during the "Faithful Citizenship" debate -- of the magnitude advanced by Francis will not happen quickly?

Employing the phrase "hermeneutic of continuity" was "shocking" for a church historian, said Massimo Faggioli, director of the Institute for Catholicism & Citizenship at the University of St Thomas in St. Paul, Minn.

It is "shocking because without any discontinuity we would not have Catholic social teaching," which has always been in development, Faggioli said. "Church leaders can be so cavalier in dismissing some important calls for updating by using Pope Benedict, but I don't think that's what Pope Benedict meant."

In his style of governance, Francis is also departing from the style of Pope John Paul II, who "gave very clear indications about what kind of church he wanted," by both appointments of bishops and by "reshaping the Roman Curia with his people," said Faggioli.

"That second part is something Francis is not doing," he said. Instead, he said, Francis is diminishing the role of the Curia.

"What is different about Francis is that he is not counting on the spoils system to reshape the Catholic church," Faggioli said. "He is counting on a church that is much more synodal."

The practice of "synodality," or a more collegial approach to governance, "is difficult for a big church like that in the U.S.," said Faggioli. But he sees something more intentional about the U.S. bishops' resistance than difficulty in translating the pope's vision to a huge operation.

"It's not just that this church is different," he said. He believes that the "clear resistance" indicates that the U.S. bishops "are not convinced that the Francis vision is really something they can trust and believe in."

Nor are they comfortable, he said, with the practice "of thinking and speaking freely. They use 'continuity' as a very convenient shield that protects you. It is like a vaccine against criticism. But the reality out here has changed."

A version of this story appeared in the Dec 4-17, 2015 print issue under the headline: Parsing priorities and plans.