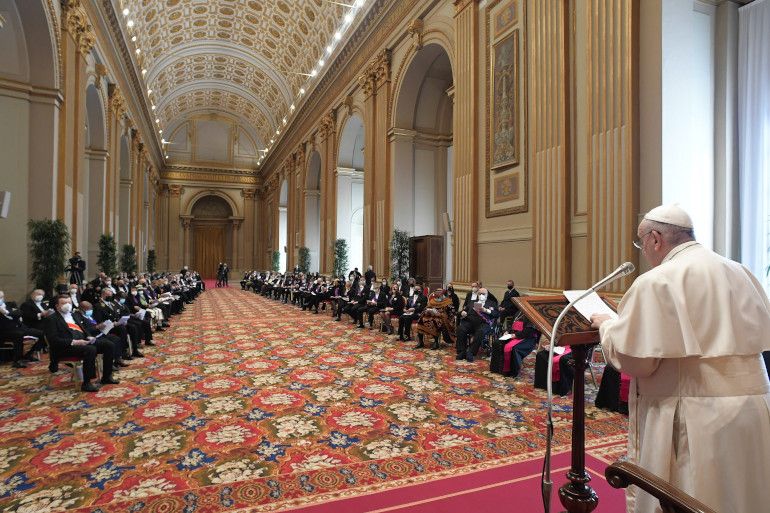 Pope Francis addresses diplomats accredited to the Holy See during an audience in the Hall of Blessings at the Vatican Feb. 8, 2021. (CNS/Vatican Media)

In an annual foreign policy address to the 183 ambassadors accredited to the Holy See, the pontiff said the pandemic had shone a light on five interlocking crises facing the world and "set before us a choice: either to continue on the road we have followed until now, or to set out on a new path."

Among the elements Francis said would mark that new path:

On the last point, the pope likened the need for changes to the global market system as akin to the 17th-century realization that the Earth revolved around the sun, saying it is time "for a kind of 'new Copernican revolution' that can put the economy at the service of men and women, not vice versa." 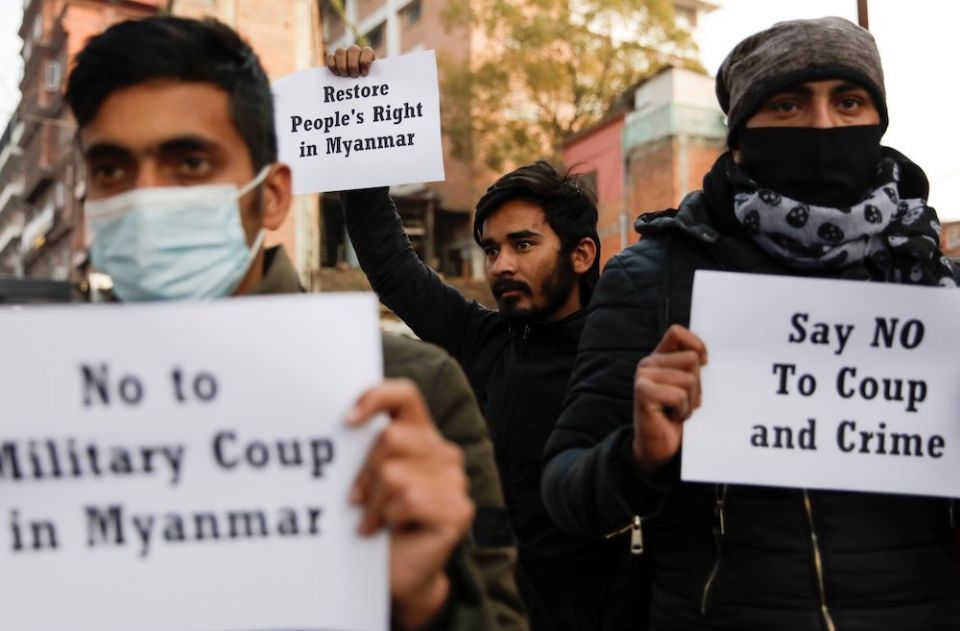 Francis has frequently called in interviews over recent months for world leaders to use the coronavirus pandemic as a way to address persistent economic and social inequalities. His Feb. 8 speech, which lasted some 55 minutes, hit upon that and a wide range of other themes at length.

The address was held in a larger hall at the Vatican than usual to allow for social distancing among the approximately 80 ambassadors who attended. Francis, who has been vaccinated against the coronavirus, did not wear a mask but generally kept distance from the others present.

The pope said the world is facing crises in five areas: in health, on the environment, on economic and social issues, in politics, and in human relationships.

Francis said the crisis in politics is "much deeper" than the other crises, and said it has resulted in "the increase in political conflicts and the difficulty, if not actually the inability, to seek common and shared solutions to the problems afflicting our world."

"This has been a growing trend, one that is becoming more and more widespread also in countries with a long tradition of democracy," he said.

In what appeared as a possible veiled reference to the United States, the pontiff added: "The development of a democratic consciousness demands that emphasis on individual personalities be overcome and that respect for the rule of law prevail."

The pope directly addressed the recent military coup in Myanmar, a country he visited in 2017, calling on the nation's imprisoned political leaders to be "promptly released."

Among other areas of concern, Francis mentioned conflicts in the Central African Republic, Libya, among Israelis and Palestinians, and the recent political instability in Lebanon, sparked by the devastating explosion at the port in Beirut in August 2020.

The pope also specially referenced the ongoing Syrian civil war, which has killed hundreds of thousands and made millions into refugees. "How I wish that 2021 may be the year when the conflict in Syria, begun 10 years ago, can finally end!" Francis said.

The pope was originally scheduled to address the diplomatic corps Jan. 25, but had to postpone the event due to a flare-up of his sciatica, a nerve condition that can cause severe lower back pain.

Francis did not seem any worse for the wear on Feb. 8, able to stand steadily throughout his lengthy speech. He also stayed standing for nearly an hour more, greeting each of the ambassadors in attendance one-by-one.

The pope did not shake hands with the individual diplomats, but spoke to each one from a few feet away. About half removed their masks when greeting the pope.

Editorial: It's too early to require Mass attendance during a pandemic

Caring more for each other could have ameliorated the pandemic. It’s not too late.