Pope Francis again pleads for an end of conflict: 'Those who make war forget humanity' 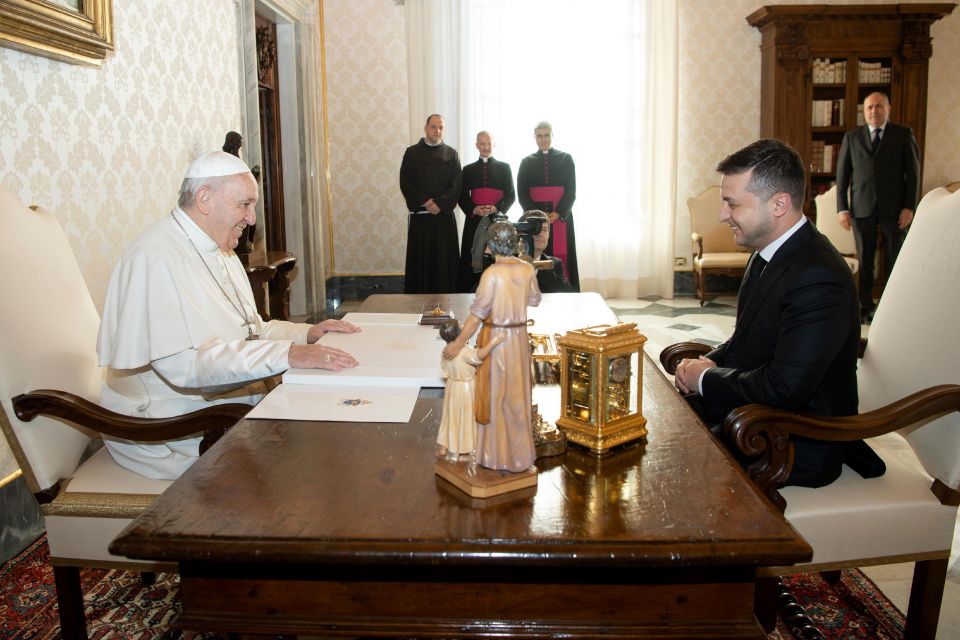 FLORENCE, Italy — As the fourth day of armed conflict by Russia against Ukraine raged on, Pope Francis on Feb. 27 again pleaded for peace, saying "those who make war forget humanity."

Francis, who has warned repeatedly against conflict in recent weeks, condemned the "diabolical and perverse logic of weapons" by those "only interested in power to themselves."

"We beg God more intensely" for an end to the violence, said Francis, who lamented the toll of war on "ordinary" people who suffer from "the foolishness of war."

The pope went on to pray for those, especially the elderly, women and children, who have had to flee their homeland as a result of the war and called for "humanitarian corridors" to be open to those seeking refuge. According to the United Nations Refugee Agency, more than 368,000 individuals have already fled Ukraine seeking shelter in neighboring European countries.

The pope also reiterated that he has called on Catholics and all believers to mark the start of Lent on Ash Wednesday, March 2, with a day of prayer and fasting for Ukraine.

On Saturday, Feb. 26, the pope called Ukraine President Volodymyr Zelensky to convey his "deepest sorrow" over the war and offer spiritual support. The pope's phone call followed an unprecedented visit to Russia's Vatican embassy on Feb. 25 to express his concern against the war.

In recent days, the Vatican has also used the pope's social media accounts to engage in Twitter diplomacy.

“Every war leaves our world worse than it was before," read a message in both Russian and Ukrainian.

"War is a failure of politics and of humanity, a shameful capitulation, a stinging defeat before the forces of evil," it continued. The quote comes from Francis' 2020 encyclical, Fratelli Tutti.

Pope Francis had originally planned to travel to the Italian city of Florence on Sunday, Feb. 27, for the closing session of a five-day meeting of bishops and mayors from 20 countries from around the Mediterranean. The Vatican announced on Friday that due to doctor's orders, Francis would have to nix his travel plans due to acute knee pain.

While the Florence forum was organized to discuss political and religious collaboration on the issues of migration, climate change and education, the discussions were overshadowed by the ongoing conflict in Ukraine.

Cardinal Gualtiero Bassetti, president of the Italian bishops' conference, used his closing remarks to plead for peace, describing the unfolding events in Ukraine as a "humanitarian tragedy that we never wanted to witness."

"My thoughts and prayers go to all those people who are now in underground shelters and to those who are fleeing," he said. "In the name of God, no to war!"

In a joint document released on Feb. 26, the bishops and mayors from around the Mediterranean called for an end to the conflict so the "great suffering to the Ukrainian people be avoided and that negotiations to rebuild peace could start immediately."

Meanwhile, in the Ukrainian capital of Kyiv, the head of the Ukrainian Catholic Church, Archbishop Sviatoslav Shevchuk, released a video message on the morning of Feb. 27 announcing that priests would visit underground shelters to celebrate Divine Liturgy.

“The church is with its people," he said. "The church of Christ will bring the Eucharistic Savior to those living in critical moments."

Vatican | Pope Francis again pleads for an end of conflict: 'Those who make war forget humanity'

Pope's quotes: Give thanks

Pope's quotes: Fruit of a covenant