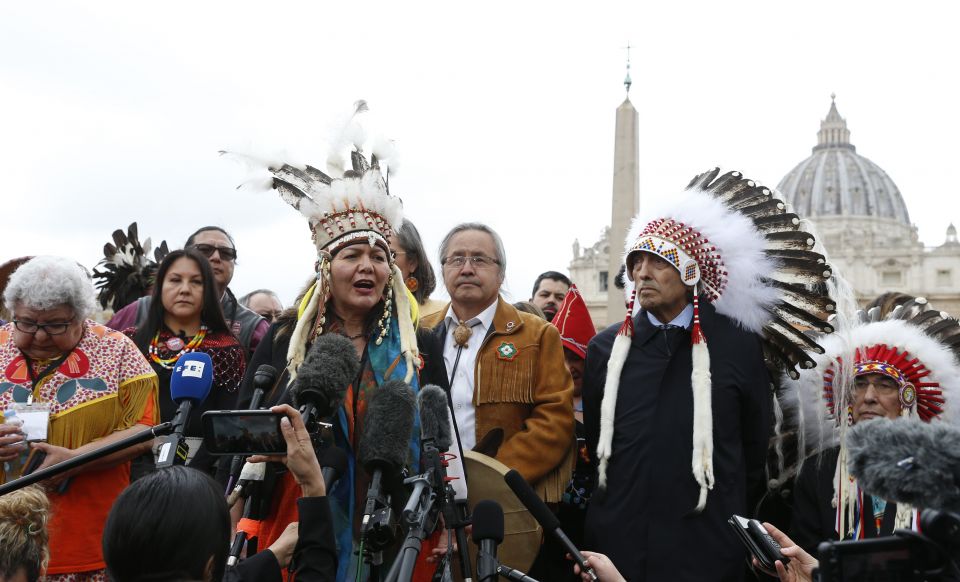 Rosanne Casimir, chief of the Tk'emlúps te Secwépemc, speaks as Assembly of First Nations delegates encounter the media outside St. Peter's Square after a meeting with Pope Francis at the Vatican March 31, 2022. The pope is holding three meetings to listen to the experiences of representatives of Canada's Indigenous communities, experiences that include being sent as children to residential schools operated by Catholic dioceses and religious orders. (CNS photo/Paul Haring)

"For the deplorable conduct of members of the Catholic Church, I ask God's forgiveness," said Francis, who described the institutional abuses by church leaders as "contrary to the Gospel of Jesus."

With those words, Francis fulfilled a request for a papal apology that comes after years of appeals from Canada's Indigenous community and even Prime Minister Justin Trudeau for the Catholic Church to seek forgiveness for its century-long involvement in the country's scandal plagued school system for Native children.

The April 1 encounter was the fourth occasion that Francis met with representatives of Canada's Indigenous community visiting Rome this week. From March 28 - April 1, the pope had previously held separate meetings with delegates from the First Nations, Métis National Council and the Inuit Tapiriit Kanatami.

"Through your voices I have been able to touch with my own hands and carry within me, with great sadness in my heart, the stories of suffering, deprivation, discriminatory treatment and various forms of abuse suffered by several of you," the pope said on Friday.

"It is chilling to think of the will to instill a sense of inferiority, to make someone lose his or her cultural identity, to sever their roots," he continued.

Throughout the week, Francis listened to firsthand testimonials about the abuses perpetrated in Canada's residential schools, many of them operated by the Catholic Church.

For over a 100 years, people who attended the institutions were stripped of their Native languages and culture and often forced to convert to Christianity. Widespread abuse within the schools has been documented, with up to 6,000 deaths reported.

"I am greatly grieved," said Francis on Friday. "It is evident that one cannot transmit the contents of the faith in a way that is foreign to the faith itself."

"Jesus taught us to welcome, love, serve and love the people," he continued. "It is terrible when, precisely in the name of faith, we give a counter-testimony to the Gospel."

After sitting through hours of testimonials throughout the week, Francis said he felt both "indignation and shame" at what he had heard.

"Indignation," he said, "because it is unjust to accept evil, and it is even worse to become accustomed to evil, as if it were an inescapable dynamic caused by the events of the past."

"And I also feel ashamed," he continued. "Pain and shame for the role that several Catholics, particularly with educational responsibilities, have played in all that has hurt you, in the abuses and disrespect toward your identity, your culture and even your spiritual values."

Nearly 200 Indigenous delegates, family members and supporters attended the final April 1 hour-long meeting in the Sala Clementina of the Apostolic Palace, which included cultural performances and prayers representative of traditional Indigenous spirituality and languages, including the singing of the "Our Father" in Inuktitut.

During his remarks the pope praised Native cultures and customs for the "harmony" and "love" they offer to "our common home" and "our human community."

Throughout the week, numerous Indigenous delegates expressed not only their desire for the pope to offer an apology, but for him to do so on Canadian soil, reiterating one of the central demands of Canada’s national Truth and Reconciliation Commission’s final report.

On April 1, Francis hinted that could take place as soon as this summer.

During his final remarks, Francis made reference to the July 26 Catholic feast day of St. Anne, saying "I would like to be with you in those days."

Long considered a patron saint of grandparents, the feast day is also popular among some Indigenous Catholics known for their reverence of ancestors and the elderly.

"I will be happy to benefit again from my meeting with you, visiting your native lands, where your families live," Francis said, adding that he would be able to better express his "closeness" to them when he visits the country.

As the pope prepared to say goodbye, he switched from Italian to English, saying to those gathered in Rome: "Pray for me, don't forget! I'll pray for you. Thank you very much for your visit."