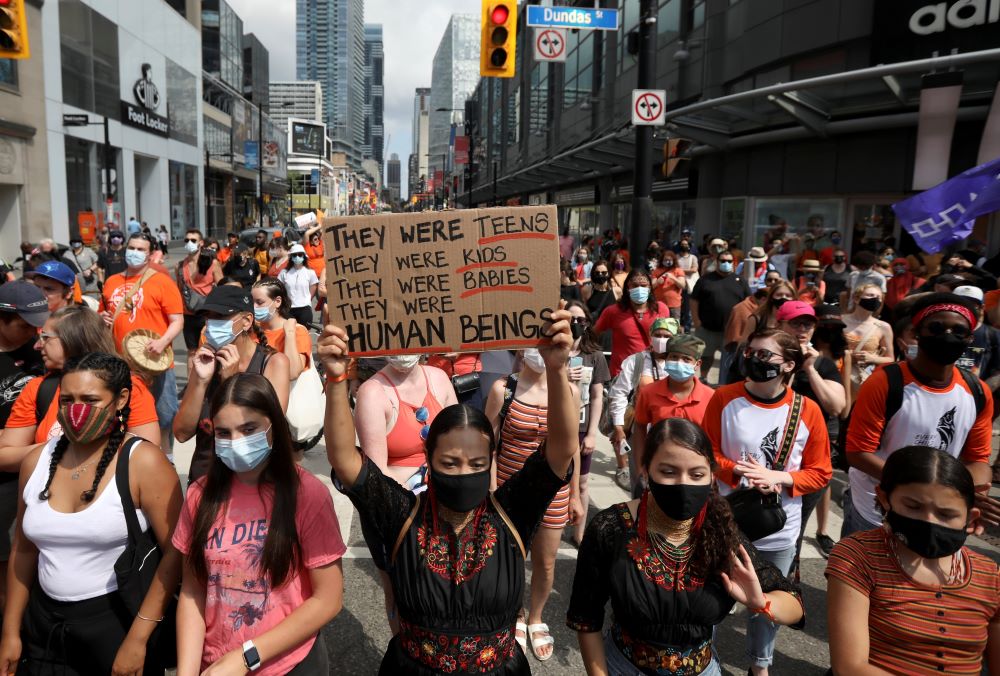 People march on Canada Day in Toronto July 1, 2021, after the discovery of hundreds of unmarked graves on the grounds of two former residential schools for Indigenous children in Canada. In four meetings March 28-April 1, Pope Francis will listen to the experiences of members of Canada's Indigenous communities. (CNS/Reuters/Carlos Osorio)

In speech after speech for almost a decade, Pope Francis has emphasized the importance of listening. Next week Francis will get to practice what he preaches.

More than two dozen Indigenous Canadians will meet with Pope Francis March 28-April 1 to give firsthand testimonials about the abuses perpetrated in Canada's residential schools, many of them operated by the Catholic Church. The meetings bring survivors and representatives of the Assembly of First Nations, the Inuit Tapiriit Kanatami and the Métis National Council to the Vatican as part of an ongoing effort to reckon with the church's shameful history of operating a network of boarding schools for Native Canadian children.

"We want to be able to share the stories of our Métis survivors and the families who are living with the lasting impacts of residential and day schools to this day," said Cassidy Caron, president of the Métis National Council.

People who attended the institutions, which date to the 19th century, were stripped of their Native languages and culture and often forced to convert to Christianity. Widespread abuse within the schools, which operated for over a century, has been documented, with up to 6,000 deaths reported.

Last fall, after years of pressure, Canada's Catholic bishops, as a full body, "unequivocally" apologized to Indigenous peoples for the suffering they endured in residential schools. Now, according to survivors and their allies, it's time for Pope Francis to do the same. 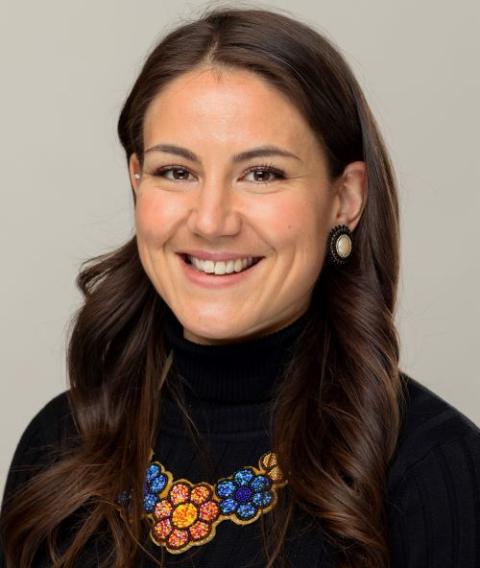 A final report from the country's yearslong Truth and Reconciliation Commission has called on Francis to do just that, and, critically, says that it should happen in Canada.

"It is extremely important that the apology happen on Canadian soil, where the atrocities against Métis, First Nations and Inuit children occurred," Caron told NCR. "We are not entering the meetings in Rome expecting an apology. The apology must be made in Canada, and we will be looking for reassurances while in Rome that this will happen."

Last October, Francis agreed to visit Canada, though no official dates have been set.

Before that happens, Caron said it is important that Francis and other Vatican officials hear firsthand from survivors and understand "the intergenerational trauma that our Nation continues to suffer from due to the injustices perpetrated in residential schools."

Archbishop Donald Bolen of Regina, Saskatchewan, who will be among the Canadian bishops accompanying the delegations, agreed, saying that listening has been an essential part of his own experience of coming to terms with the church's history of mistreatment of Native peoples. 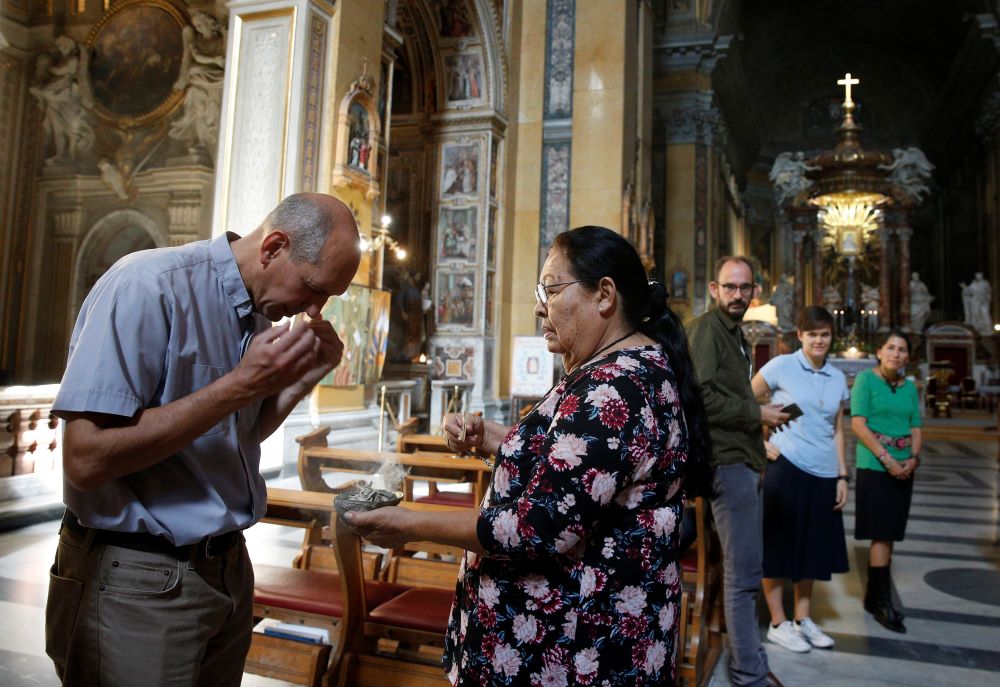 Archbishop Donald J. Bolen of Regina, Saskatchewan, participates in a smudging ceremony as Rita Means, tribal council representative with the Rosebud Sioux Tribe, holds a smoking bowl at the Church of Santa Maria in Traspontina in Rome Oct. 18, 2019. Bolen said that listening has been essential to coming to terms with the church's history of mistreatment of Native peoples. (CNS/Paul Haring)

"It took me a little while to change gears, but what a beautiful thing it is to walk with Indigenous people," he told NCR. "But I'm learning so much and really benefiting so much from this walk together."

"It means coming to a new narrative about the history of this land and the role of the church and the residential schools," he said.

That new narrative, he continued, must "attend to the suffering that was experienced and the way that colonization really marginalized Indigenous peoples and the way that the church, by religious communities and dioceses, accepted and played a part in the government's assimilation policy."

In doing so, and by taking young children from their homes, Bolen said, this "deprived Indigenous peoples of language, culture, traditions, spirituality, faith, wisdom and disrupted family life."

The delegation had planned to come to Rome in December, but the meetings were canceled at the last minute due to a surge of COVID-19 cases, resulting in yet another setback for the long-sought encounter with the pope.

'The process of healing and reconciliation must begin with us learning the full, comprehensive truth to what occurred within the walls of these institutions.'
—Cassidy Caron

As survivors and those living with intergenerational trauma continue the long road of reconciliation, Caron said that in addition to an apology, the church must play a role in helping to restore parts of the Indigenous past that have been taken away, including their records and historical artifacts.

"Unfortunately, for many of the schools that Métis children attended, the records are still held outside of Canada, and are inaccessible to us," she said, noting that the delegation intends to ask Vatican officials to turn over these files.

"The process of healing and reconciliation must begin with us learning the full, comprehensive truth to what occurred within the walls of these institutions," Caron said.

As for what to expect in Rome, Bolen said that from the moment Francis was elected — nine years ago this month — outreach to the margins has been at the heart of his papacy.

As such, he believes Francis will not only be prepared to listen to and learn from the Indigenous delegates meeting with him, but to use the moment to offer the global Catholic Church a lesson.

Francis, said Bolen, has "often spoken about Indigenous people, not only about the negative impact of colonization, but also about the blessings and the wisdom and the insight from Indigenous traditions and ways that a relationship with the land and with creation is inspiring."

"Pope Francis is telling us we all need to learn," he said. "This is where this meeting is in his wheelhouse. It's going to be something which touches what he sees as the heart of his ministry, so I suspect it's going to be a powerful encounter."

While the meeting is considered high stakes, Bolen said that Francis and all church leaders should approach the meetings ready to listen and with a spirit of humility.

Bolen said some delegates will have a lot of rightful anger toward the church and see the meetings as too late. Others will see this as a new opportunity and a chance to continue reconciliation efforts.

Regardless, Bolen said the church must own up to its past and be ready to continue its encounter with those suffering, because "as Jesus said, it’s the truth that sets you free."