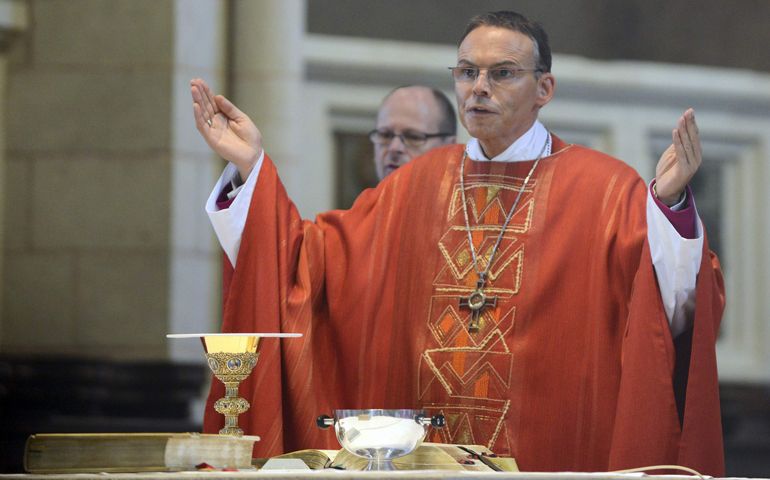 The news that Pope Francis fired -- or "accepted the resignation of" -- the German churchman known as "Bishop Bling" because of his big-spending ways has touched off speculation among Catholics that other dismissals could be in the offing.

Here's the answer in four words: Perhaps, but probably not.

Recent history shows why: Bishop Robert Finn of Kansas City, Mo., remains in office 18 months after his conviction -- and $1.4 million spent on his defense -- for failing to report a priest suspected of abuse. Los Angeles Cardinal Roger Mahony enjoys a high-profile retirement in spite of the disapproval of his own successor over Mahony's abuse record. Similarly, Cardinal Bernard Law, formerly of Boston, is still living a gilded existence in Rome years after he was plucked from the U.S. amid the clergy abuse scandal.

Not to mention Newark, N.J., Archbishop John Myers, who heads his diocese amid questions about his handling of abuse cases as well as pricey additions to his upscale retirement home.

Financially speaking, "Bishop Bling," Franz-Peter Tebartz-van Elst of Limburg, Germany, was in a league of his own: He spent approximately $43 million on a luxurious new residence and office complex while cutting staff.

After news of the expenditures broke in September, Tebartz-van Elst was sent to a monastery and Francis sent an emissary to figure out what was happening. On Wednesday, Francis formally accepted his resignation, which the Vatican said was offered in October.

So is this the start of something new? Don't hold your breath for three reasons:

'Bishop Bling' was a perfect storm

Not only did Tebartz-van Elst spend a ton of money on all the wrong things, but he did so just after the cardinals elected a pope who is making austerity and humility the hallmarks of a bishop in today's church. Francis wants prelates to "smell like the sheep," not pricey cologne, and he doesn't want them to act with the sort of authoritarian and dismissive manner that Tebartz-van Elst displayed.

In fact, as the resignation of Tebartz-van Elst was being announced Wednesday, Francis was telling thousands of people in St. Peter's Square that "a bishop who is not in the service of the community does no good."

In addition, Tebartz-van Elst in November paid a court-ordered fine of nearly $30,000 to avoid a perjury charge over his false claims that he did not fly first class to India on a charity trip. That's three strikes.

There is no process for firing a bishop

It seems odd, but the Vatican just can't depose or defrock a bishop the way it can -- and often does -- a priest. The Vatican statement on Tebartz-van Elst justified his departure by saying his situation "impedes a fruitful exercise of his ministry."

If that sounds vague, that's because it is. In recent years, different popes have removed or forced the resignation of numerous bishops for a host of reasons: financial shenanigans, perceived dissent from church teaching or revelations that they fathered a child or two, as happened with Los Angeles Auxiliary Bishop Gabino Zavala in 2012.

But the real reasons behind the dismissals are usually guesswork because the process is secret, even to the men getting the pink slip. Often, there is in fact no real process at all -- the Vatican would rather just work behind the scenes to pressure a bishop to resign quietly then forget about the whole episode.

"Bishops may be successors of the apostles and Vicars of Christ in their own diocese, but they have fewer rights under Canon Law than parish priests," the editors of The Tablet, a London-based Catholic weekly, said in a 2013 editorial calling for a transparent and just system for removing bishops.

If it were, you might be hard-pressed to find a bishop in many dioceses. Instead, the church's Code of Canon Law generally requires that a bishop have done something clearly wrong, such as stealing or committing abuse himself -- which can trigger "privation" of his office.

As blogger and canon lawyer Edward Peters has put it, "criminal conduct is not the same thing as 'mismanagement,' and it is certainly not the same thing as 'weak performance.' " Doing a bad job could justify sacking a lower-level official, Peters wrote in connection with the resignation of an African bishop in 2011, but does not constitute grounds for firing a member of the hierarchy.

It's worth noting that disgraced bishops and cardinals rarely lose their titles or are defrocked. Case in point: Mahony and Scottish Cardinal Keith O'Brien, who was brought down in a sex scandal just before last year's conclave. Instead, they are told to stay under the radar or are moved to lower-profile posts.

In fact, Tebartz-van Elst, who was removed despite the support of some powerful allies, remains a bishop, and the Vatican said "the departing bishop ... will be given another job at an opportune time."

Pope: Stop throwaway culture now before another generation is lost