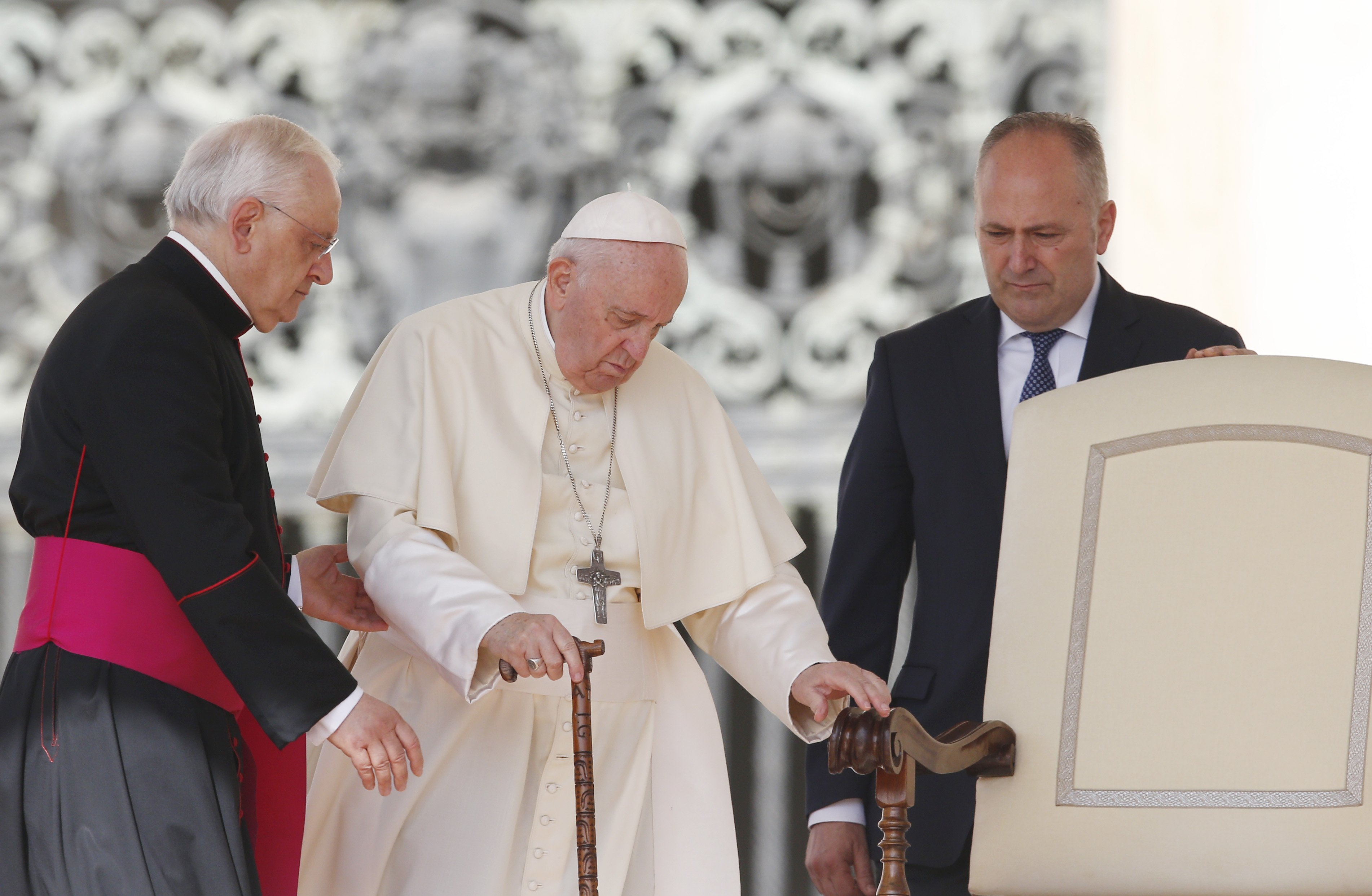 Pope Francis uses a cane as he begins his general audience in St. Peter's Square at the Vatican May 25, 2022. (CNS photo/Paul Haring)

ROME — Pope Francis on May 25 said his heart was "broken" after at least 19 schoolchildren and 2 adults were killed in Texas in America’s latest school shooting and called for an end to the trafficking of firearms.

"I pray for the children, the adults killed and their families," said Francis at the conclusion of his Wednesday general audience. "It is time to say enough to the indiscriminate trafficking of guns."

"Let us all commit ourselves so that such tragedies can never happen again," he continued.

The pope's remarks came a day after an 18-year-old gunman entered Robb Elementary School in Uvalde, Texas on May 24 and opened fire on second to fourth grade elementary students in the deadliest school shooting in the United States in a decade.

Earlier in the day on May 25, Archbishop Gustavo Garcia-Siller of San Antonio, Texas, took to social media to ask for Francis' support.

"Holy Father Pope Francis, say some prayers for the souls of our little ones killed today and two teachers," he tweeted. "Uvalde is in mourning. The families are having a very dark time. Your prayer will do good to them."

Francis has repeatedly used pointed words when speaking against the weapons industry. In 2015, he expressed dismay at those who produce weapons and call themselves Christian.

Following the Texas school massacre, a spokesperson from the U.S. bishops' conference issued a statement saying "there have been too many school shootings, too much killing of the innocent."

"Each of us also needs to search our souls for ways that we can do more to understand this epidemic of evil and violence and implore our elected officials to help us take action,” the statement continued.

In an unusually long and forceful statement, Cardinal Blase Cupich of Chicago said "America is awash in guns. We have more firearms than people."

"As I reflect on this latest American massacre, I keep returning to the questions: Who are we as a nation if we do not act to protect our children? What do we love more: our instruments of death or our future?," he continued.

"The Second Amendment did not come down from Sinai. The right to bear arms will never be more important than human life. Our children have rights too. And our elected officials have a moral duty to protect them," Cupich concluded.

In 2017, Cupich launched an anti-violence program in Chicago with a goal of reducing gun violence in the city, which received the backing of Francis.

“Walking the path of peace is not always easy, but it is the only authentic response to violence,” the pope wrote at the time.

To date in 2022, there have been at least 77 incidents of gun fire on school grounds in the United States.

"What struck me on that 17-hour flight what struck me was these kinds of mass shootings rarely happen anywhere else in the world. Why?," the president asked on May 24, after arriving back in Washington after a trip to Asia.

In Rome, the U.S. ambassador to the Vatican, Joseph Donnelly, issued a statement saying "we are witnessing a sickness, and the face of evil."

"We continue to pray for these blessed children and other wonderful people who were killed and their families," said Donnelly. "We are crushed by this loss.”