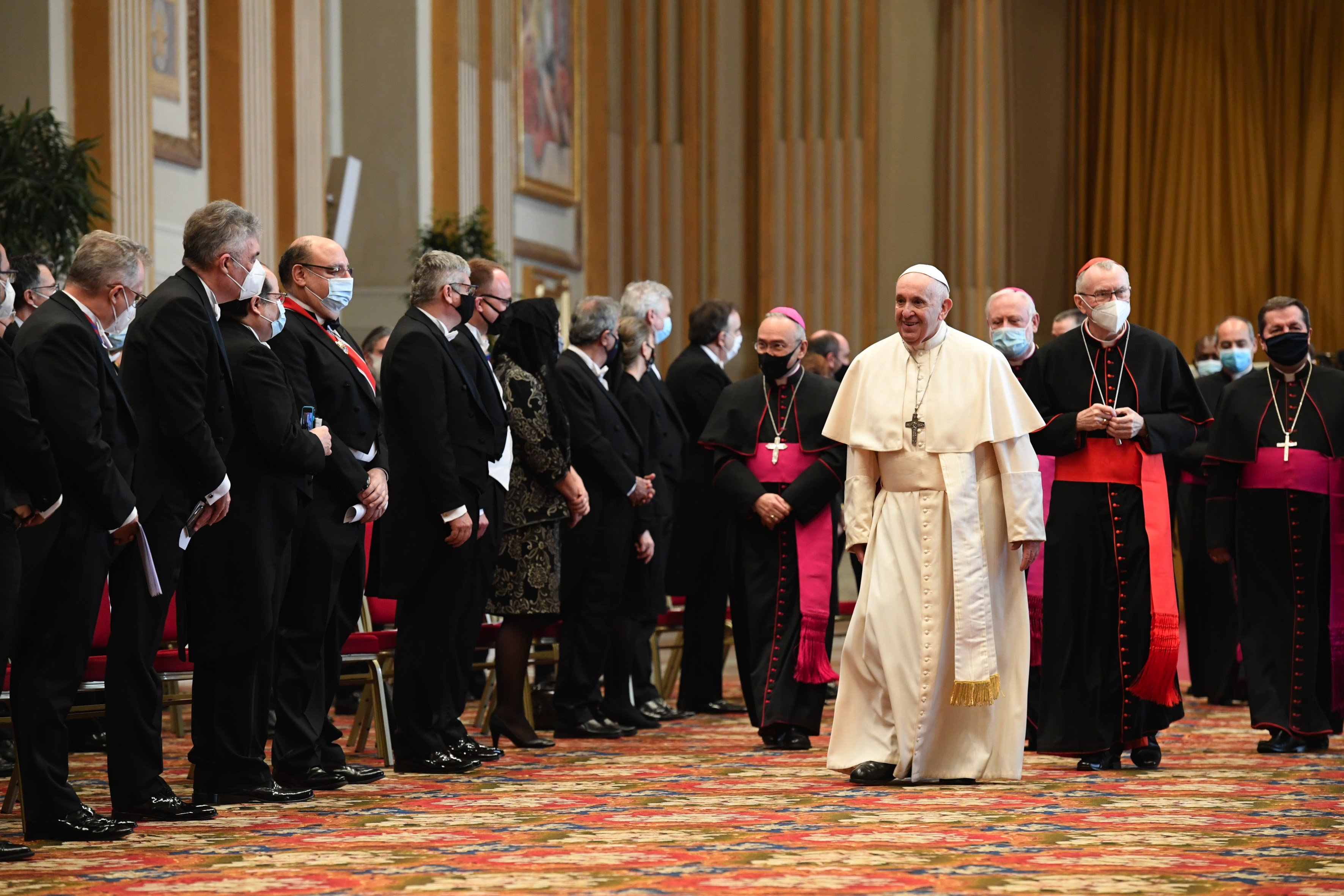 Pope Francis walks near diplomats accredited to the Holy See during an audience in the Hall of Blessings at the Vatican Feb. 8, 2021. (CNS/Vatican Media)

ROME — Pope Francis on Jan. 10 used his annual address to the Vatican's diplomatic corps to warn against "cancel culture," which he said has been "invading many circles and public institutions."

The pope slammed those who operate under the "guise of defending diversity" and in the process eliminate "all sense of identity," which he said risks "silencing positions that defend a respectful and balanced understanding of various sensibilities."

Diplomacy, he told representatives from the 183 countries accredited to the Holy See, is "called to be truly inclusive, not canceling but cherishing the differences and sensibilities that have historically marked various peoples."

The pope's pointed remarks came during an address often referred to as his "State of the World," wherein he made a strong plea for multilateral diplomacy at a time of significant global crises amid increased social fragmentation.

The work of diplomacy, Francis lamented, has been "diminished" through a sense of mission creep by international organizations pursuing "divisive" aims unrelated to their founding principles.

"As a result, agendas are increasingly dictated by a mindset that rejects the natural foundations of humanity and the cultural roots that constitute the identity of many peoples," which he said is a form of "ideological colonization" that "leaves no room for freedom of expression."

"A kind of 'one-track thinking' is taking shape," he continued, "one constrained to deny history or, worse yet, to rewrite it in terms of present-day categories, whereas any historical situation must be interpreted in accordance with a hermeneutics of that particular time."

Despite such criticisms, the pope said that greater international cooperation — not less — is key to confronting the multi-pronged challenges facing the world, particularly when it comes to the global pandemic, migration and climate change.

Francis, who has emerged as one of the world's most vocal proponents of vaccines to combat the COVID-19 pandemic, encouraged greater access to vaccines and sought to refute misinformation about their effectiveness.

"We have realized that in those places where an effective vaccination campaign has taken place, the risk of severe repercussions of the disease has decreased," he said.

Francis also denounced those who are swayed by ideologies, "often bolstered by baseless information or poorly documented facts," which he said had created confusion in the efforts to vaccinate and protect as much of the world as possible.

"Vaccines are not a magical means of healing, yet surely they represent," he said, "the most reasonable solution for the prevention of the disease."

In addressing the challenges posed by migration, the pope reflected on his travels last month to Cyprus and Greece, where the plight of migrants was spotlighted during his time in both Mediterranean countries.

"Before those faces, we cannot be indifferent or hide behind walls and barbed wires under the pretext of defending security or a style of life," said Francis.

As he has done on numerous occasions, the pope said it was incumbent for Europe to better coordinate its response in welcoming new arrivals from Africa and Asia, adding that every country must play a role in integrating migrants and refugees.

"No one can be asked to do what is impossible for them, yet there is a clear difference between accepting, albeit in a limited way, and rejecting completely," he said.

"Sadly, we must also note that migrants are themselves often turned into a weapon of political blackmail, becoming a sort of 'bargaining commodity' that deprives them of their dignity," Francis added.

As Francis addressed the issue of climate change, the pope lamented that last November's meeting of world leaders in Glasgow, known as COP26, produced results that "were rather weak in light of the gravity of the problem to be faced."

The road to tackling the environmental crises is "complex and appears to be long, while the time at our disposal is shorter and shorter," Francis warned.

The world's challenges, Francis said to the diplomats, are interconnected, and therefore, their solutions, he argued, must be faced together through "cultivating dialogue and fraternity among one another."

As the pope concluded his 45-minute speech in the Hall of Blessings inside the facade of St. Peter's Basilica — and as global pandemic enters its third calendar year — Francis pleaded for a different sort of contagion to define the year ahead.

"The gift of peace is 'contagious,' " he said. "It radiates from the hearts of those who long for it and aspire to share it, and spreads throughout the whole world."