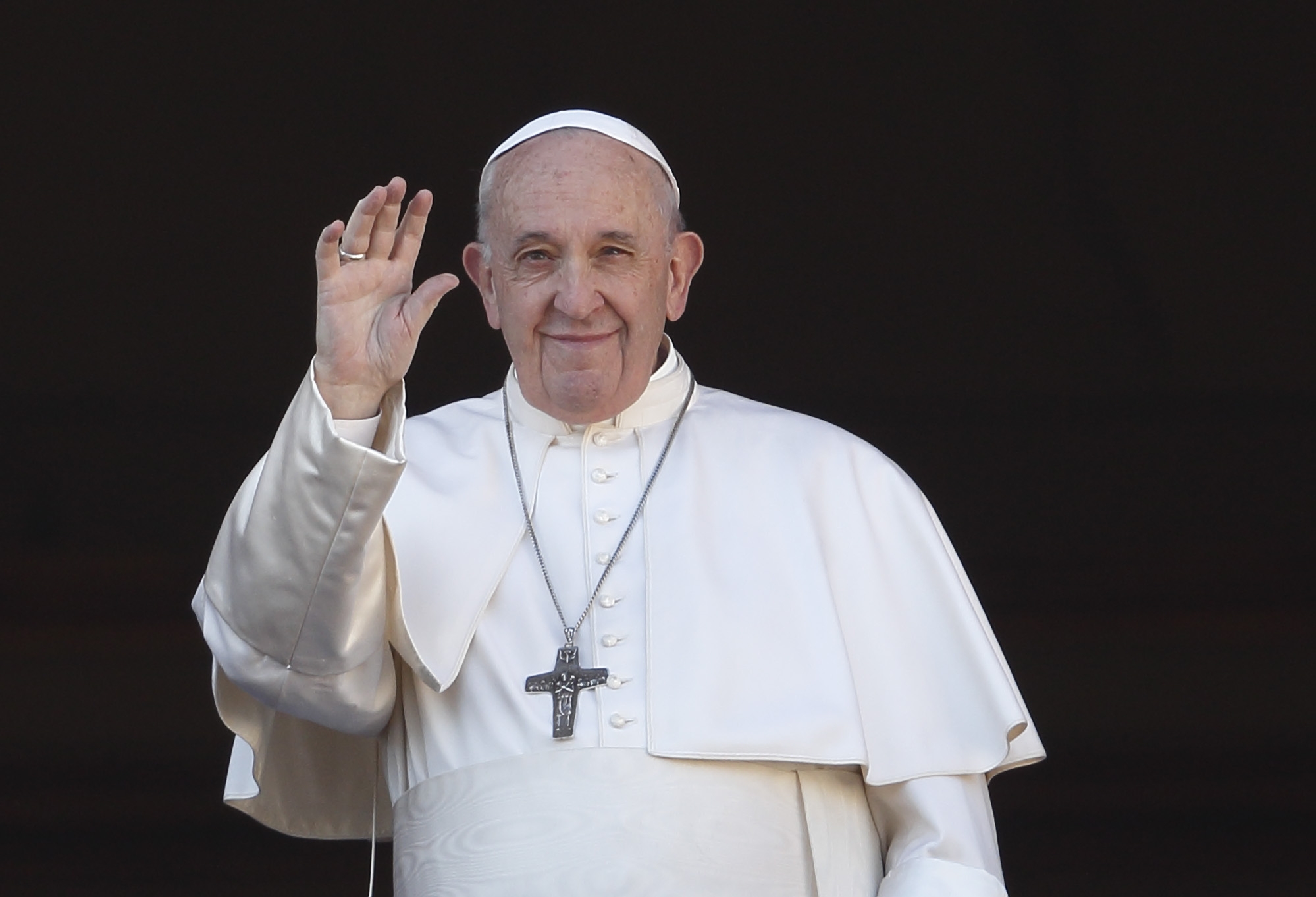 Pope Francis greets the crowd as he leads his Christmas message and blessing "urbi et orbi" (to the city and the world) from the central balcony of St. Peter's Basilica at the Vatican Dec. 25, 2019. (CNS photo/Paul Haring)

ROME — As the COVID-19 pandemic raged on for a second holiday season in a row, Pope Francis used his annual Christmas Day message to plead for equitable access to vaccines.

"Open hearts to ensure that necessary medical care — and vaccines in particular — are provided to those peoples who need them most," prayed Francis, as he delivered his Dec. 25 urbi et orbi ("to the city and the world") message and blessing.

Last year's national lockdown in Italy forced the pope to deliver the traditional speech from inside St. Peter's Basilica's Hall of Blessings to a small audience of only 50 people. This year, however, Francis returned to the basilica's central balcony overlooking the square, where a crowd of several thousand pilgrims gathered below on a gray and drizzly Christmas morning at the Vatican.

The pope used the occasion to urge world leaders against isolationism and not to take "shortcuts" by avoiding dialogue, which he followed by a litany of prayers for countries facing violence and war.

"Baby Jesus, grant peace and harmony to the Middle East and the whole world," said Francis, as he prayed for the conflict hotspots of Afghanistan, Iraq, Lebanon, Syria and Yemen.

The pope also prayed for the ongoing disputes between Israelis and Palestinians, lamenting that it has dragged on for decades "without a resolution, with ever more serious social and political consequences."

He specifically called attention to Bethlehem, the birthplace of Jesus, which the pope said is experiencing economic hardship due to the lack of pilgrims visiting the Holy Land during the pandemic.

Among his other pleas for reconciliation, Francis remembered Sudan and South Sudan, North Africa, Ethiopia and Myanmar, while also praying against "fresh outbreaks of a long-festering conflict" in Ukraine, as it faces a potential invasion from Russia.

"Even as the message of the birth of the Savior, the source of true peace, resounds in our hearts and in the whole world, we continue to witness a great number of conflicts, crises and disagreements," the pope deplored.

"These never seem to end, by now we hardly even notice them," he continued. "We have become so used to them that immense tragedies are now being passed over in silence. We risk not hearing the cry of pain and distress of so many of our brothers and sisters."

As is his custom, the pope also spotlighted the needs of migrants and refugees.

"Their eyes beg us not to look the other way, ignoring our common humanity, but instead to make their stories our own and to be mindful of their plight," he said.

The pope rounded out his remarks by reflecting on the ways in which the global pandemic has wreaked havoc on already vulnerable populations and begged the world not to turn away from their suffering.

"Son of God, comfort the victims of violence against women, which has increased in this time of pandemic," prayed Francis. "Offer hope to young children and adolescents suffering from bullying and abuse."

"Show consolation and warmth to the elderly, especially those who feel most alone," he continued. "Give serenity and unity to families, the first educators of their children and the basis of the fabric of society."

As he concluded, the pope urged political leaders to take greater environmental action, saying that "our common home" is "suffering from the carelessness with which we so often treat it."

"O Christ, born for our sake," Francis prayed, "teach us to walk beside you on the paths of peace."