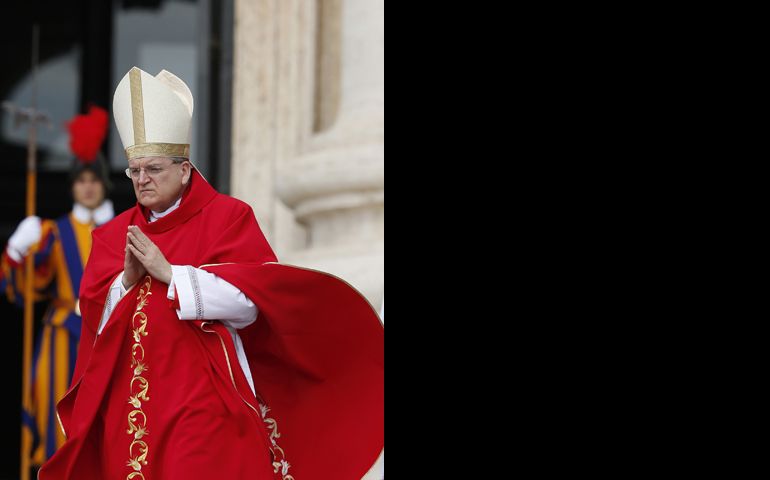 Cardinal Raymond Burke arrives for Pentecost Mass celebrated by Pope Francis on May 19 in St. Peter's Square at the Vatican. (CNS/Paul Haring)

In private conversations, Pope Francis often acknowledges that reforming the Vatican will be a difficult task opposed by powerful interests in the church. Developments on Monday showed both the progress he has made and the challenges that remain.

Case in point: Cardinal Raymond Burke, an influential American conservative who has worked in the Roman Curia since 2008, lost one key post Monday when he was left off the Vatican body that vets bishops for the pope to appoint. Those appointments are seen as the key to securing Francis' legacy.

But in an interview a few days earlier, Burke -- who remains head of the Vatican equivalent of the Supreme Court -- also publicly raised doubts about Francis' plans to make wholesale changes in a papal bureaucracy in keeping with the pontiff's vision of a more open, pastoral church.

"The service of the Roman Curia is part of the very nature of the church, and so that has to be respected," Burke told EWTN, a U.S.-based Catholic cable network that spotlights conservative views.

"I can't imagine that somehow the Roman Curia is going to take on a completely different figure. It just doesn't make sense," Burke said. The interview was broadcast Thursday as the centerpiece of a program that highlighted concerns about the direction of the church since Francis was elected in March.

Francis' own top collaborators, namely a "kitchen cabinet" of eight cardinals he tapped to help him change the Vatican's byzantine and often scandal-ridden ways, have said the old curial system "is over," as one put it, and will be replaced by "something different."

But Burke told EWTN that it was "not altogether clear what the results of the reform will be" and lamented what he described as "a kind of unpredictability about life in Rome in these days."

The cardinal's answer was in response to a question about comments by Archbishop Georg Gänswein, who was the top aide to retired Pope Benedict XVI. Gänswein, who also works with Francis, complained in a German newspaper interview last week that "I wait every day for another innovation" from the new pope.

How much the undercurrent of unease or even resistance to Francis' plans could impede the reforms is unclear.

In their places, he named archbishops and cardinals who are considered more pastoral than dogmatic, including Washington Cardinal Donald Wuerl. Wuerl and Burke have often crossed swords, in particular over Burke's insistence that U.S. prelates like Wuerl should deny Communion to pro-choice Catholic politicians.

In his EWTN interview, Burke reiterated his hard-line view on Communion, and he took pains to note that Francis' comments in his recent exhortation on the church, called Evangelii Gaudium, were meant as "suggestions" and not as authoritative papal teaching.

Burke also echoed conservative concerns over the pontiff's effort to strike a "new balance" so that church leaders do not "obsess" over a few teachings like abortion and gay marriage. Instead, Francis wants them to speak more about the need to care for the poor and marginalized.

"One gets the impression, or it's interpreted this way in the media, that he thinks we're talking too much about abortion, too much about the integrity of marriage as between one man and one woman," Burke said. "But we can never talk enough about that!"

In February, Francis will have two more important opportunities to make his mark: His Council of Cardinals will give him a blueprint for reforming the Curia, and a few days later, he will appoint his first batch of new cardinals -- some of the men who may one day gather to elect Francis' successor and chart a new course or follow the one he is laying out.