Pope Francis welcomes refugees to a new life in Italy 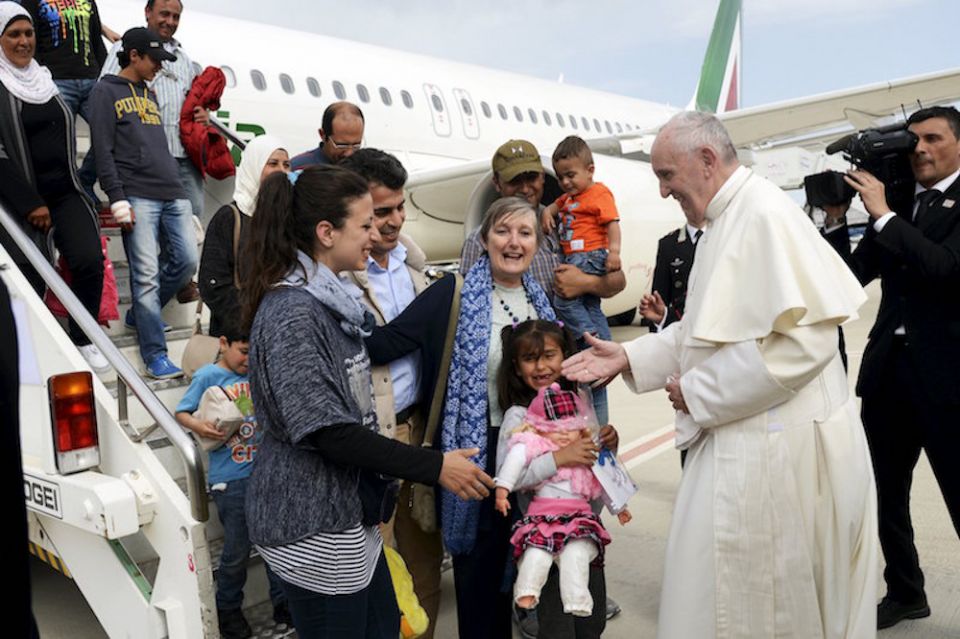 Pope Francis welcomes a group of Syrian refugees after they landed at Ciampino airport in Rome, following a visit at the Moria refugee camp in the Greek island of Lesbos, April 16, 2016. (RNS/AP/Filippo Monteforte)

Vatican City — At an event welcoming 33 refugees sponsored by the Vatican, the cardinal in charge of administrating Pope Francis' charitable work called European bishops to "wake up" and take a stand in welcoming displaced persons fleeing persecution in the world.

"There is great compassion from the Holy Father toward these people, and we are doing everything we can to wake up every bishop in Europe, especially the bishops conferences," said Polish Cardinal Konrad Krajewski, the papal almoner, speaking to a group of reporters on Wednesday (Dec. 4).

"It is a shame for Europe," he added.

His comments took place during a news conference at Rome's Fiumicino airport, where the 33 refugees — including 14 minors — arrived from the infamous camps in Lesbos, Greece. The majority of the asylum-seekers were fleeing from war-torn Afghanistan, but one woman was from Togo and another hailed from Cameroon carrying her infant child.

Francis famously visited the island of Lesbos in 2016, where he made a powerful plea for the rights of immigrants and refugees at a time when the flux of foreign nationals into Europe had reached its peak. There, he stunned the world by deciding to bring three refugee families back with him to the Vatican. One of them attended the welcoming ceremony to usher the newcomers into their new life.

Today, those families and several others who have joined since are fully integrated into Italian and European societies. Instrumental to this work has been the Catholic St. Egidio community, usually pegged as Pope Francis' favorite movement due to its involvement in peacekeeping, immigration and practical works of charity.

Since February 2016, St. Egidio has been able to bring 3,026 refugees into Europe using humanitarian corridors. Italy, thanks to the commitment of its episcopal conference and Protestant community, has welcomed the majority of the refugees brought in by St. Egidio, reaching a total of 2,448, most of them from Lebanon and Ethiopia.

The founder and head of St. Egidio, Andrea Riccardi, told journalists he hopes that humanitarian corridors such as these lead to "a wide and European process" of adopting more and more people fleeing war and persecution.

Riccardi visited Lesbos shortly before Easter this year and said he was "shocked by the extremely difficult situation, by the wounded humanity there." He later told the pope about the terrible conditions that he witnessed, and Riccardi said Francis encouraged him to get to work to create a solution.

The refugee camps in Lesbos have reached a tipping point, with numbers doubling over a span of months as political and social unrest shakes Africa and the Middle East. Many of the refugees being welcomed on Wednesday came from Moria, a camp that has become infamous for the poor conditions of the people forced to inhabit it, often with no hope of ever leaving.

Krajewski said that in May, when he visited the camp, it was overcrowded with 7,000 people; it exceeds 17,000 now. The people live in abysmal conditions with scarcely any electricity, running water or food, he said, comparing the camp to "concentration camps."

"And this is a problem, a reason of shame for all of us: It's only 17,000 people. They aren't millions," he said. "For this reason, if we open the churches, the parishes, the cathedrals, the convents, if cardinals open their homes, it would be a battle to find people to welcome."

For Maryam Moradi, among the refugees welcomed by the Vatican and originally from Iran, living in the Moria camp in Greece "was the worst experience my family ever had."

Speaking to Religion News Service on Wednesday, she described life at Moria as consisting of "no hope," especially for the elderly who are forced to live there.

The lines for food are so full of people that there is barely any space to breathe, she said, which once caused a woman to have a miscarriage due to the pushing and shoving. "There is no humanity," she said, "in the camp, it's terrible."

Moradi said she is grateful for Pope Francis' intercession and appeals to global leadership to "help each other, to be friends and to stop war and fights," insisting that refugees "just want a normal life."

For Mustafa Ahmadi, who is just shy of 17 years old, it's been "a long and dangerous journey" that has brought him from Afghanistan, to Iran, to Turkey, to Lesbos. There, he said, he was forced to live in one tent with four families, about 14 people, with no access to electricity and a 10 minute walk to the closest bathroom.

He said the pain and desolation he has witnessed have "really hurt" him and sees the intervention of the Vatican and St. Egidio as "a kind of miracle, a dream, really."

Thinking back on those he left behind, Ahmadi said he wishes all of them had been as lucky, but said he will not give up on this tremendous opportunity and wants to  follow in the footsteps of those who made it possible.

"I'm going to follow your pope," he said, adding that while he doesn't plan on changing his Muslim beliefs "just looking at the good job, work and actions of your pope, I'm going to learn from him."