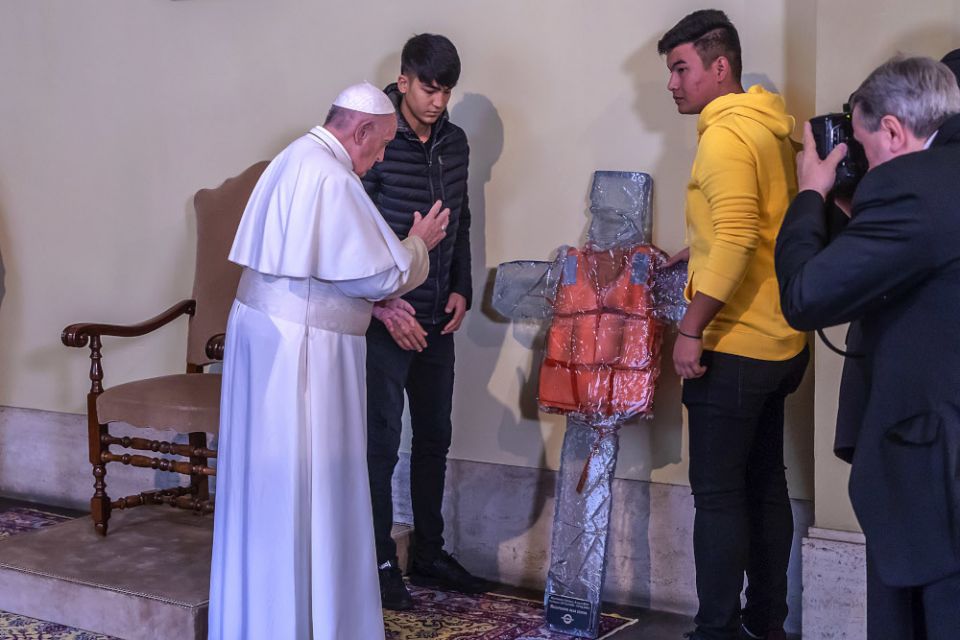 Pope Francis blesses a cross featuring a refugee's life vest during a meeting with recently arrived refugees from the Greek island of Lesbos at the Vatican Dec. 19, 2019. The pope met 33 refugees and migrants who had arrived in Rome two weeks ago. (CNS/Stefano Dal Pozzolo)

Vatican City — Before blessing a large resin cross constructed around a used orange life vest, Pope Francis insisted human beings have a "binding" moral obligation to save those whose lives are threatened, including the lives of migrants and refugees.

"We must rescue and save because we are all responsible for the lives of our neighbor and the Lord will ask us to account for them at the moment of judgment," the pope said Dec. 19 as he met 33 migrants and refugees brought to Rome two weeks earlier by Cardinal Konrad Krajewski, the papal almoner.

The group, which included 14 children and teens, arrived in Rome from the Greek island of Lesbos Dec. 4. Most were originally from Afghanistan, but there also was a woman from Togo and a young mother and her 3-month-old baby from Cameroon. The group included both Christians and Muslims.

The life vest in the center of the cross, which the pope blessed and had hung in an alcove by the guest elevators in the Apostolic Palace, was picked up by a migrant rescue organization in the central Mediterranean Sea July 3, 2019. A small plaque below the cross gives the date along with the GPS coordinates of where it was recovered.

Francis said he wanted the jacket to be part of a cross because the cross symbolizes both suffering and redemption through the triumph of Jesus. "The unknown migrant, who died hoping for a new life, participates in this victory," the pope said.

Several years ago, Francis was given another orange life vest. He said he gave it to the Migrants and Refugees Section of the Dicastery for Promoting Integral Human Development with the comment, "Here is your mission."

"By that I meant the inescapable commitment of the church to save the lives of migrants in order to welcome them, protect them, support them and integrate them," the pope said, as the group from Lesbos looked on, except for the toddler who played at his feet.

No one knows who the life vest in the cross belonged to, he said. "We are facing another death caused by injustice. Yes, because it is injustice that forces many migrants to leave their homelands. It is injustice that obliges them to cross deserts and endure abuse and torture in detention camps. It's injustice that rejects them and makes them die at sea."

Francis said he wanted to display the life vest "'crucified' on the cross to remind us that we must keep our eyes open, keep our hearts open and to remind everyone of the binding obligation to save every human life, a moral obligation that unites believers and nonbelievers."

"How can we not hear the desperate cry of our brothers and sisters who prefer facing a stormy sea rather than dying slowly in Libyan detention camps, places of torture and despicable slavery?" the pope asked.

Francis called for the closure of all detention camps in Libya, where many of the migrants and refugees attempting to reach Europe are held for a time.

And, he said, "we must set aside economic interests because at the center must be the person, every person whose life and dignity are precious in God's eyes."

The arrival in Italy of the 33 migrants and refugees was an extension of the "humanitarian corridor" project worked out by the Italian Interior Ministry, the Catholic Community of Sant'Egidio and the Federation of Evangelical Churches in Italy.

Most of the 3,000 migrants, refugees and asylum-seekers resettled in Italy under the project have been from Syria; travel documents and permits to stay in Italy while awaiting an asylum hearing are granted on the basis of "vulnerability" because of age, family size or physical or mental condition.

Krajewski and volunteers from the Community of Sant'Egidio visited Lesbos in May to get the process started. They were joined by Cardinal Jean-Claude Hollerich of Luxembourg; in November, he welcomed two migrant families from the island to Luxembourg where they will be supported and assisted by the archdiocese.

The new arrivals in Rome will be supported by the Vatican. The Community of Sant'Egidio helped find housing for all of them, will provide them with Italian language lessons and assist them in adjusting to life in Italy.

Maryam Moradi, 34, her husband and two teen-age boys were at the meeting with the pope, held in the ground floor atrium of the Apostolic Palace. Afghanis who had been living in Iran, they made their way to Turkey and then to Greece. They had been in refugee camps and tiny apartments on Lesbos since September 2016.

Before the pope arrived, she told reporters that "it's not important where we are from or whether we are Muslim or Christian. For him, all that matters is that you are human."

After two weeks in Italy, Moradi said that "the best thing is to feel free, and now to meet the pope."

Fatimah Hossini, 15, brought the pope an oil painting of himself. The young woman painted it six or seven months ago after Krajewski met her in Lesbos and gave her a photo of the pope.

"Rome is a beautiful city," she said, "although it's cold now."

Faith is something best 'lived on one's feet'

Paul VI could be canonized in 2018, diocesan newspaper says